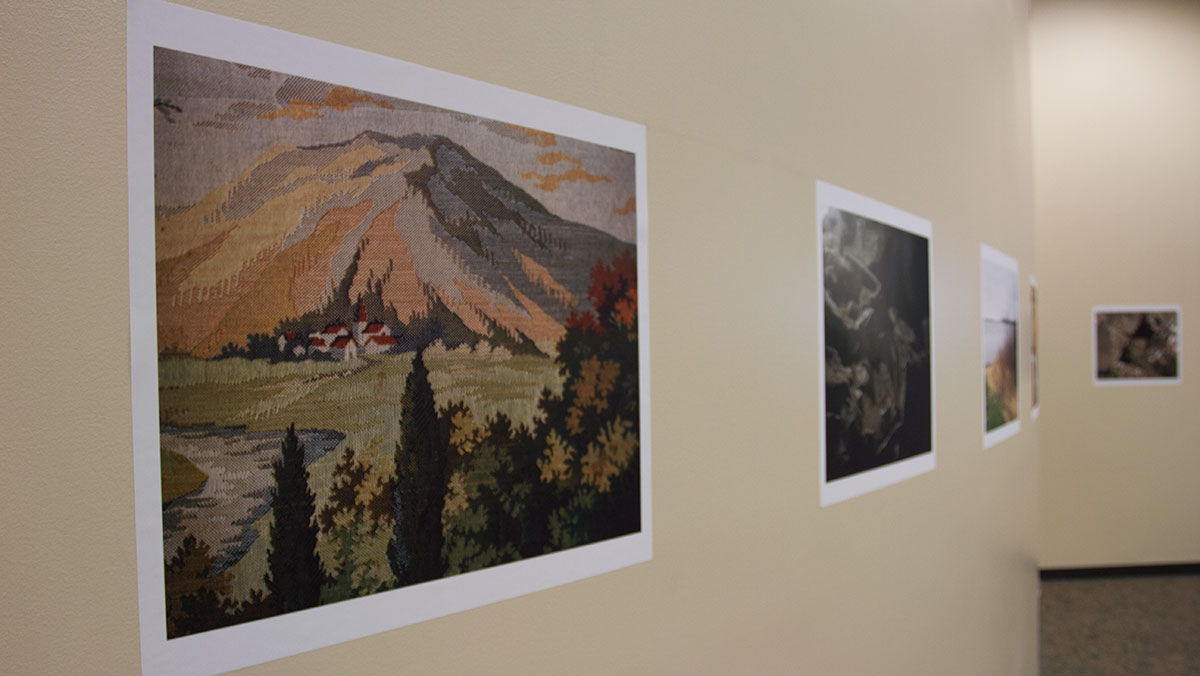 Upon eggshell-white walls hang photographs of blankets of snow, streams of water, hidden cave pools and a forest of barren trees. These seemingly different features of nature reflect the diverse terrain of the land of fire and ice: Iceland.

Photo exhibit “Island Mountain Glacier” by Anika Steppe ’13 is currently on display at the Tompkins County Public Library until March 28. Taken during Steppe’s stay in Iceland from February through April 2014, the photographs combine striking landscapes with the mysticism of Icelandic folklore.

At first glance, Steppe’s photos come off as a bit lackluster and only attempt to successfully captivate the viewer. When compared to the stunning photographs of Iceland’s Northern Lights or active geysers by other artists, the depictions of a stream of water or a cave of rocks falls short in eliciting the same awestruck reactions. In addition, the eclectic variety of the photographs makes it difficult to cohesively view the entire exhibit as a single entity. Because of this, there is no visible transition between the photographs to create a smooth, artistic storyline.

However, when paired with Steppe’s artist statement, the exhibit elicits a new level of interest and curiosity that the photographs cannot accomplish on their own. According to her artist statement, Steppe said she felt compelled to search for traces of another’s existence. Viewing the photos with the proposed existence of a mystical being increases the exhibit’s appeal, since the viewer can pretend that a hidden figure exists within the photographed landscape.

Steppe further said she was interested in and inspired by Iceland’s rich culture of storytelling.

“They are known to be a bit more open-minded to the idea of mystical creatures in a way,” she said. “[The idea of] being more accepting of other ways of thinking and just kind of having that in the back of my mind while I photographed was an interesting way to approach the landscape, which sometimes seemed almost other-worldly.”

Some of the most mysterious and infamous mythological beings in Icelandic folklore are elves called the “huldufolk,” which translates to “hidden people.” The Icelandic belief in the existence of the huldufolk sometimes prompts the people to stop building projects that may trespass upon and damage the huldufolk’s home within the rocks and boulders.

When viewed with this knowledge, the setup of Steppe’s photographs creates a striking emptiness that entertains the idea of the presence of the mystical. Solely focusing on and capturing the natural and domestic landscape provides the audience with the opportunity to imagine a “hidden person” lurking in the shadows. This artistic motive tests the limitations of reality within the context of the age-old debate between seeing and believing.

Sally Grubb, exhibit coordinator at TCPL, said Steppe’s decision to not provide a detailed title and explanation to her work allows viewers to construct their own perceptions about the photographs.

“She’s allowing you to totally look at the scene as if you were there and make up your own mind as to what it reflects,” she said.

The elegant simplicity of Steppe’s photographs juxtaposes the complexity of mythology and folklore. However, it is this contrast that lends itself to the mysticism of her work. One of the main components of mythology is the belief in the unknown, pushing individuals to look past the restrictions of reality and open themselves up to the depths of their imagination. If people have this idea in mind, the exhibit fulfills its intent of influencing viewers to think critically about the invisible presence of mysterious beings. However, without this context, the exhibit remains a noncohesive amalgam of photographs.

Inspired by the storytelling involved with folklore, Steppe said part of her intention with her exhibit was to create a photographic narrative that takes a step out of the realm of reality.

“I think sometimes photographs are always viewed to be truthful, you see what they’re taking and you’re attracted to think it exists, but they’re always going to be photographs, so there is a fictionality to them,” she said. “They aren’t exactly reality. They are removed. They’re pieces of paper that contain a time and a place, and while you can’t deny that those are there, that’s not the whole story. There’s so much narrative that can go along with it, so that’s why I like developing this show together — I kind of got to take these extractions of reality and put them together to create a new story.”

While “Island Mountain Glacier” captures the beauty and diversity of the Icelandic landscape, its true success lies in its entertainment of the idea of the unknown and the unseen, testing the limitations of reality and persuading individuals to accept that one does not always have to see to believe.