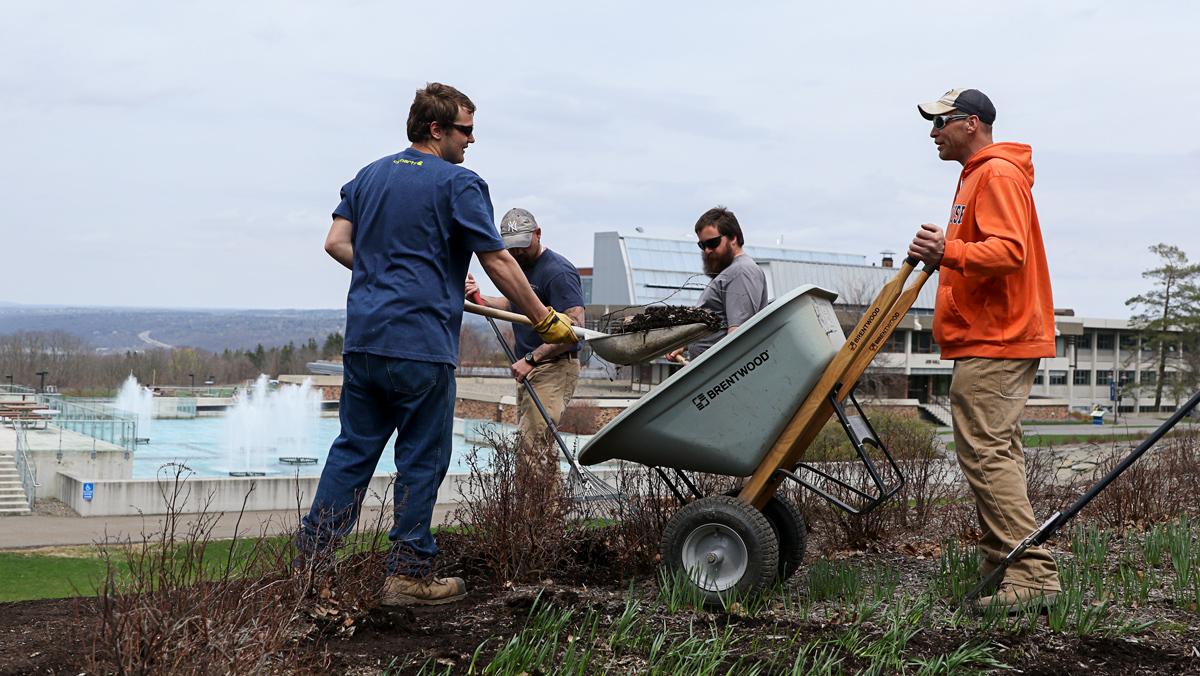 It’s a spring day and students are out lounging in their hammocks, balancing on their tightropes and sitting on blankets or benches. The campus pops with the colors of spring — freshly mowed green grass and vibrant yellows and oranges of daffodils. Because of the precision and care of Ithaca College’s grounds crew, the campus is able to come back to life after months of snow. 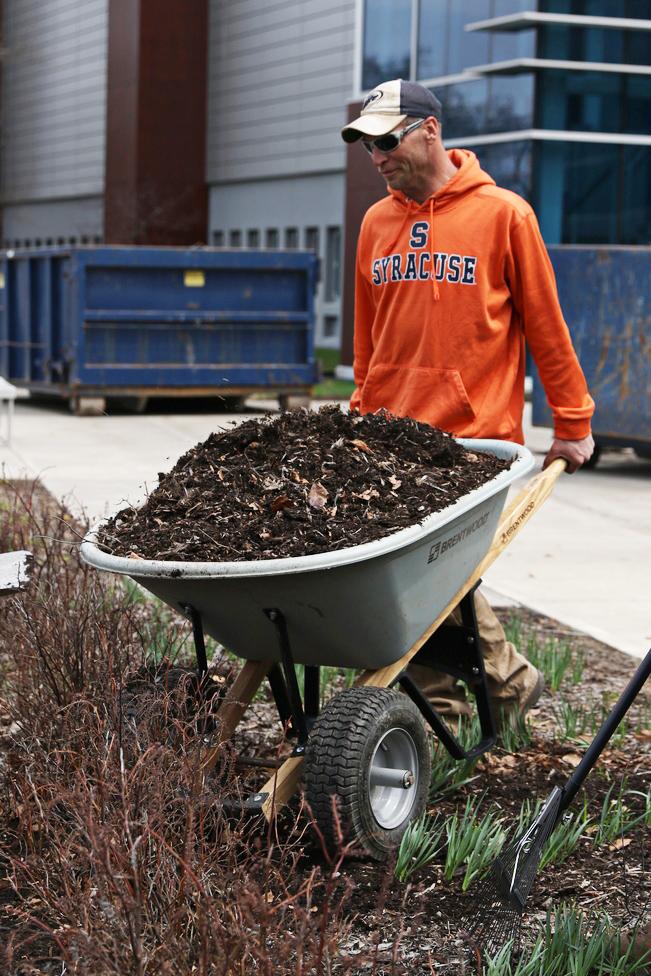 The college’s grounds crew starts officially preparing for the campus’ spring landscaping around mid-March. Ernie McClatchie, executive director of Facilities, said that with approximately 300 acres of developed land to care for, the crew members have to start early. The crew cleans stray leaves out of flower beds, spreads new mulch, mows the grass, installs the fountains, cleans off sidewalks and plants 6,000 new flowers every spring. It can take two weeks to re-mulch each flower bed and approximately a month and a half to clean out the flower beds. Additionally, the crew has to keep up with year-round duties like picking up the trash and recycling.

The spring workload doesn’t just take a lot of time but also becomes more difficult as it goes on, grounds crew member Gene Ward said. Just when the flower beds are nearly cleared out, the grass starts to grow. With more to do, the team divides into smaller groups so that some members can mow the grass, others can pick up the garbage in the Circle Apartments  and those remaining can finish clearing out flower beds. Ward recalled a few years ago when the flowers didn’t survive until commencement. It was difficult for the grounds crew to replant the whole campus with thousands of flowers, he said.

“There were two of us who actually planted, three to four guys who would actually prep the beds for us,” he said. “It took us a week.”

An iconic landscaping design on the college’s campus is the hexagonal IC flower bed outside of the Peggy Ryan Williams Center in the Benefactor’s Circle. The design is created by carefully placing flowers — mums in the fall and annuals in the spring — to spell out the letters “I” and “C.” In order to spell out the college’s initials, the grounds crew members use two different colors of flowers: One color is only used to spell out the letters “IC,” and the other color fills up the empty spaces in the flower bed. The team works off of a graph, using string to keep all the plants in line to spell out the letters. However, even with the strings, getting every plant in place often relies on simply judging plant placement by eye. Grounds crew member Jack Carpenter said it is important for the crew to make the letters look neat. However, he said it can be difficult to create.

“Some years, the mums we plant that with … are varying in sizes,” he said. “If they were all exactly the same size it would look perfect. You have to really wiggle stuff around.” 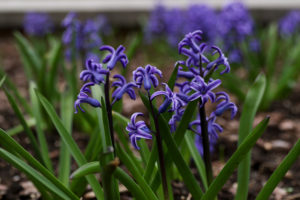 The grounds crew plants flowers according to the season. Typically, they plant mums in the fall and annuals in the spring. Kristen Harrison/The Ithacan

The grounds crew also has to manage other day-to-day issues like protecting the flowers from surrounding wildlife. Grounds crew member Rick Fischer said it is most crucial to keep the flowers safe with nets and fencing before they blossom. The grounds crew has found that animals like deer and rabbits tend to leave the plants alone once they’ve bloomed, so protecting them while they grow is essential for their eventual impact to take effect.

Additionally, the crew has to constantly adjust to Ithaca’s notoriously unpredictable weather. A flash frost could kill all the flowers if they were planted too early, a stray breeze could blow new leaves back into the gardens or a downpour could get shoes muddy and track dirt throughout the campus that they then have to clean up. McClatchie said weather is a huge issue because it can also dictate when flowers can be planted and when the fountains can be turned on.

Weather also affects what time of year some flowers can be planted. For instance, tulips have to be planted before winter if they are going to pop up in the spring. Or, if the grounds crew wants to fill a bed with mums in the fall, it has to replace that bed in the spring with annuals. Addressing these constraints can be difficult and require planning for what plants to order and when. 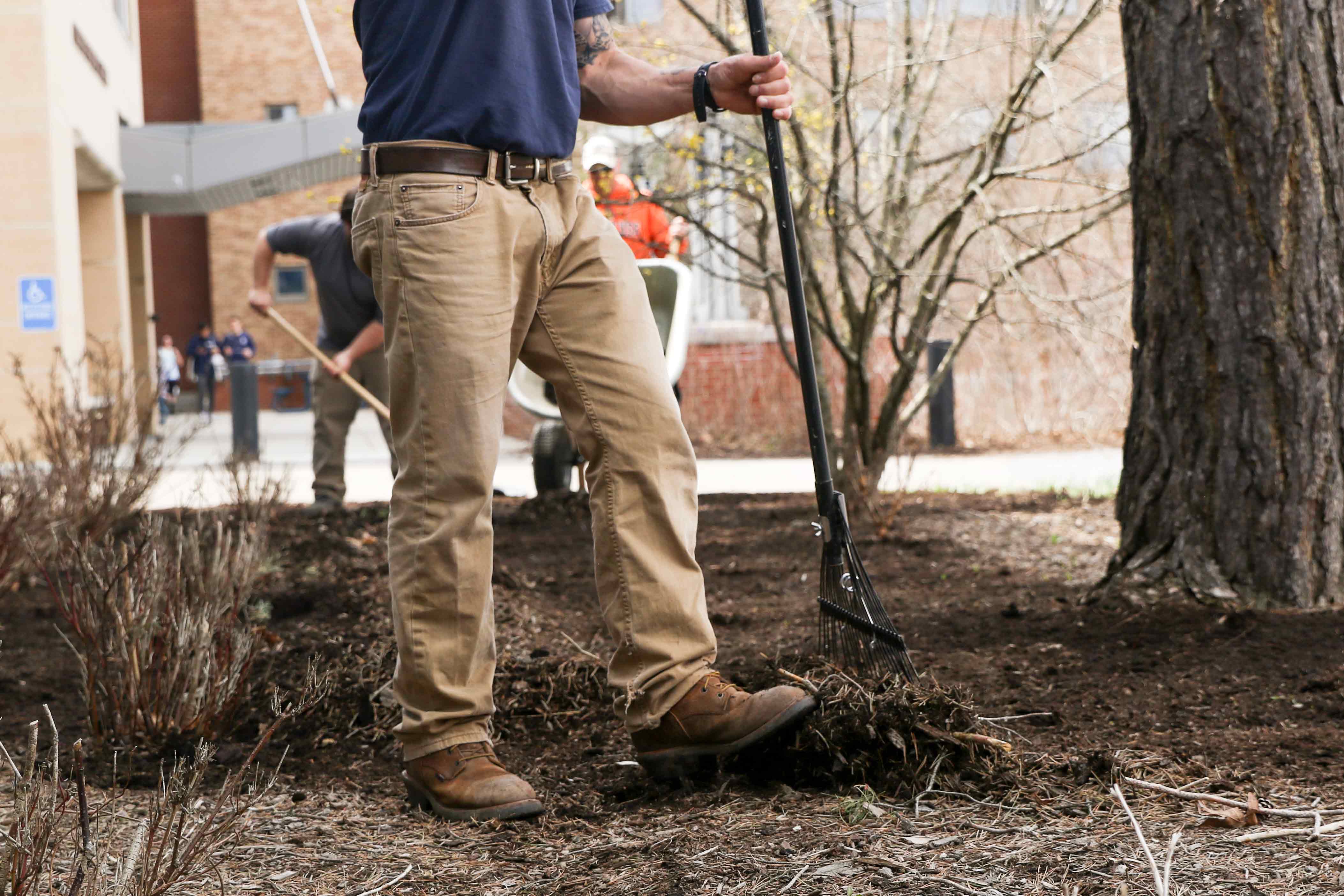 Aside from planting flowers, the grounds crew also mulches and cleans out flower beds, picks up garbage and clears walkways of snow in the winter. Kristen Harrison/The Ithacan

Much of the work the grounds crew does revolves around commencement. Until the seniors start the walk to get their diplomas, the crew is making sure every inch of the campus looks its best for the graduating students and their families.

“That Saturday before Commencement, the whole crew is here and every weed wacker that we have, every mower, is going,” Ward said. “We pretty much mow the entire campus.”

As everything culminates for graduation, the pressure and the time demands to make campus look its best for graduating students and their families tend to increase. Some days, the crew will start at 5:30 a.m. and will not leave work until 7:30 p.m., Ward said. As of now, the grounds crew members see one another more than their families, Ward said.

“There are all the things at home that you need to do or want to do, and you don’t really have the time to do it,” Fischer said. “I like to do a garden every year at my house, and this is the time you do that. You’re trying to fit that in when you get home. It’s tough.”

However, Ward said the members of the crew talk, joke and argue, and he described their relationship as a brotherhood.

McClatchie said it is always satisfying to see the campus finished with every flower planted and all the grass mowed because he knows all the hard work that everyone puts into it.

“Undoubtedly the most rewarding aspect is seeing the finished product and knowing the part that each individual played in making the campus as beautiful as possible,” McClatchie said. 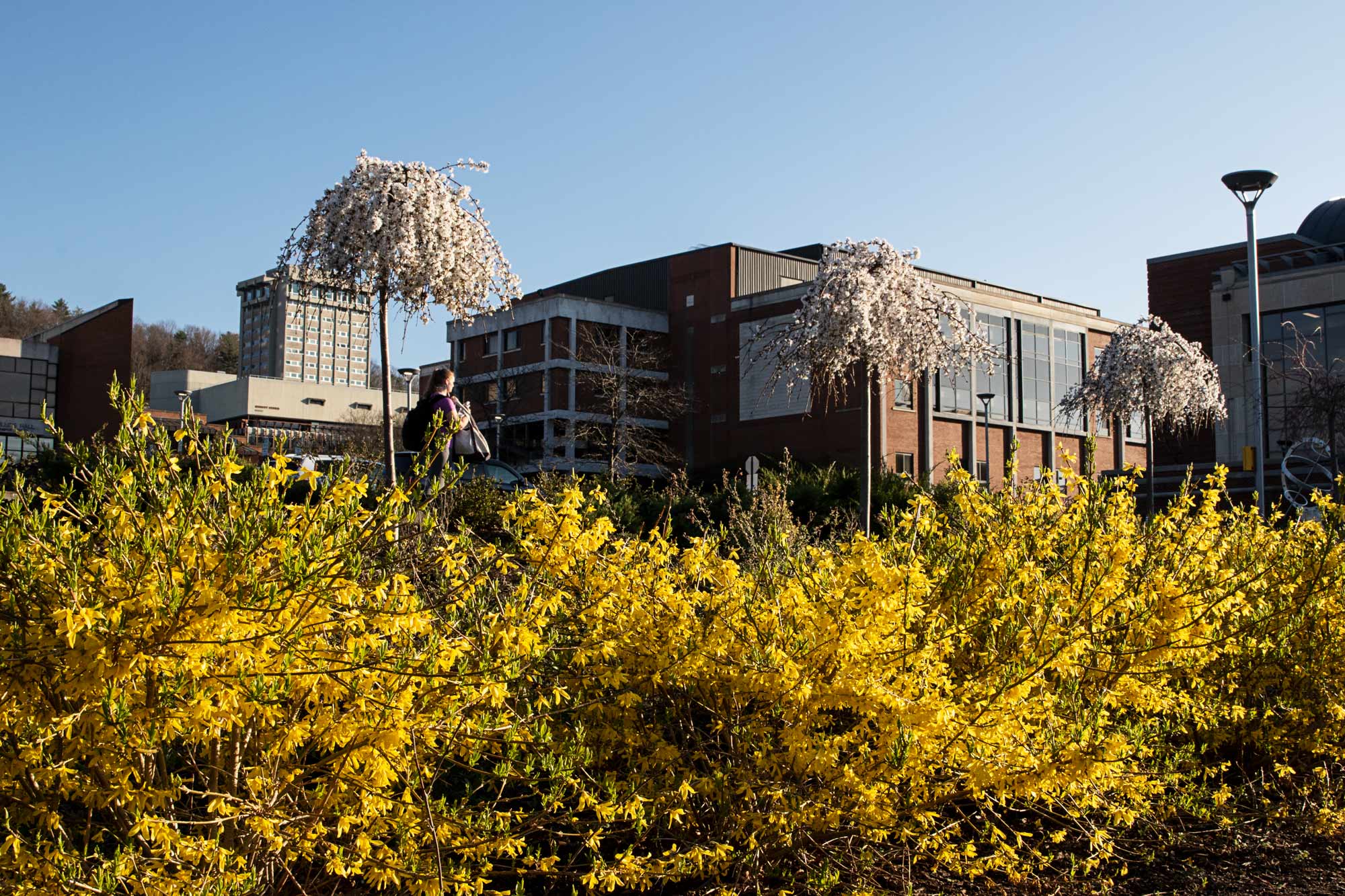 In preparation for Commencement in May, the grounds crew puts in long days of work, sometimes beginning at 5:30 a.m. and ending at 7:30 p.m. Kristen Harrison/The Ithacan

Carpenter said that the compliments and appreciation from everyone on campus are satisfying. Carpenter said that sometimes he can forget all the progress that he and the crew have made because he is so focused on the work he still has to do. He said receiving compliments reminds him to step back and remember all the hard work he has done.

“Our grounds are always kept nice,” she said. “I feel like they preserve the campus really nicely. It’s all really well-kept.”

Carpenter said it is important for the grounds crew members to make the campus beautiful because they all want everyone — students, faculty, staff, prospective students and families — to enjoy it. He said he likes making the campus look its best and hearing feedback from all students and faculty.

Ward said those compliments are what make all their hard work worthwhile.