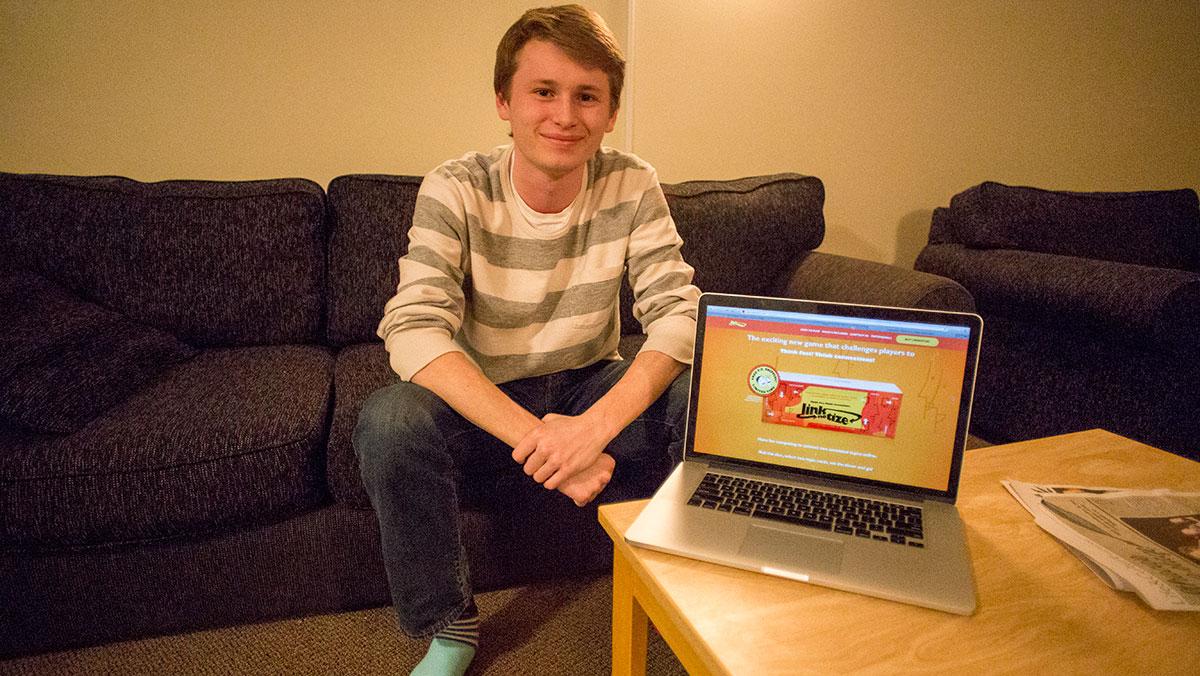 A few friends drove down the highway on a road trip to New York City last June. Making conversation, junior Jack Janson brought up the “Five Clicks to Buddha” Wikipedia game, which is based on the idea that anything could be connected to Buddha within five clicks on embedded Wikipedia links. His friends scoffed in disbelief, but pulling out his phone, Janson proved them wrong. Little did Janson know, this idea would grow into a full-fledged, Web-driven game.

Inspired by “Five Clicks to Buddha,” Janson began to explore what other topics he could connect online. Janson said he was intrigued by the endless possibilities of finding links between seemingly unrelated topics on the Internet.

“We kind of got to thinking, my [partner] and I, that if you can link Buddha to anything in the world, why can’t you link anything else?” Janson said.

After researching and checking the concept’s feasibility, Janson came up with the idea to turn it into a modern board game incorporating online tools to find connections. Within a few short months of that car ride in June, Janson and his team turned his idea into a Web-driven board game: Linknotize.

On shelves as of early January, Linknotize is an interactive party game where players try to connect two topics in the fewest number of steps using embedded Wikipedia links. The game has 450 topics across six categories: history, entertainment, sports, science, the arts and geography.

According to the Linknotize game rules, each round starts when each player rolls the dice, selects two topic cards and sets the timer for 3 minutes. Each player will use a phone, tablet or computer. Starting on the Wikipedia entry of one topic, each player races through links on the page until the second topic is reached or time runs out. The player to connect the cards in the fewest number of steps wins.

Susan Berkowitz, a friend of Janson’s parents, is Janson’s main project partner and Linknotize’s main developer. Berkowitz was driving to New York City with Janson when he originally brought up the game idea.

Berkowitz said she believes Linknotize has modernized the traditional board game, tailored it to current generations and brought educational fun to kids of all ages.

“This generation of kids really has learned to do everything online,” Berkowitz said. “Now we have this intersection of online and offline. It’s kind of the best of both worlds, and I think that’s really resonating with people.”

Several reviewers have since helped promote the new game. Linknotize was recently featured in In Touch magazine, receiving a shoutout from Ellen DeGeneres who “exercises her knowledge of pop culture with Linknotize.” Berkowitz said she hopes this will boost Linknotize’s popularity.

This modern twist on the board game isn’t just fun and games, Janson said. Apart from amusement, he said the game also offers educational value and encourages constructive use of technology.

“In a world where everybody has a computer in their pocket, it kind of makes sense,” Janson said. “It provides, at least in my mind, some educational benefit, while at the same time of course being fun.”

Juan Arroyo, assistant professor in the Department of Politics at Ithaca College and Model United Nations moderator, has worked with Janson both in class and in Model U.N. since Fall 2013. Arroyo said he has come to know Janson very well and said Janson’s own ability to link topics is reflected in Linknotize.

“It doesn’t surprise me the content of the game is fact based, but it’s a game,” Arroyo said. “The simulations are kind of the same way. They’re fact based, but it’s simulated so we can take things in different directions, and the students can be creative. It’s a good fit with what he does in the Model United Nations.”

Arroyo, who just recently learned about Linknotize, said he was impressed by the concept of the game and appreciated the creativity that went into its creation.

“I think it’s very interesting, and it’s a fun way to introduce people to encyclopedias, the Web and to the links between everything,” Arroyo said. “It gets people to understand how many different things are linked together, either immediately or in a more distant way.”

Now available in the U.S. for $25, Janson said Linknotize is opening players’ eyes to the possibilities of the Internet.

“It teaches you a different way to think about the world,” Janson said. “Everything is interlinked.”