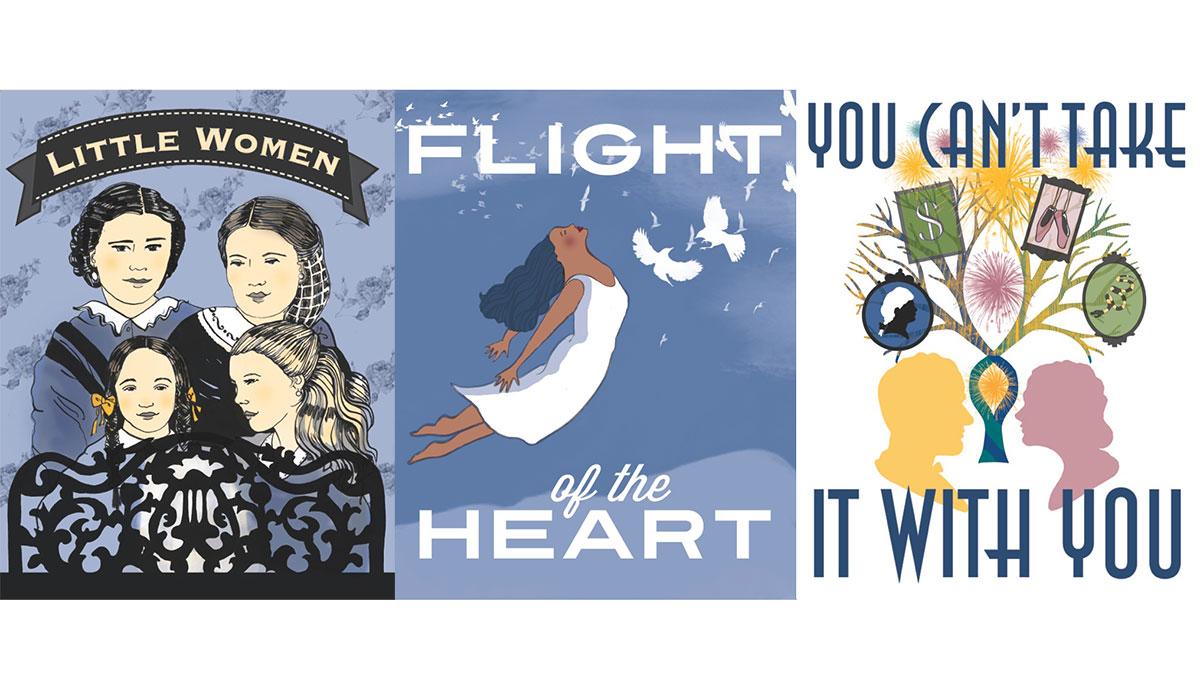 Ithaca College’s Main Stage Theater will explore themes of family, romance and more with its three final productions of the 2014-2015 theater season: “Little Women,” “Flight of the Heart” and “You Can’t Take It With You.” Staff writer Josh Vitchkoski spoke with the minds behind these shows to explore the themes and philosophies driving their production.

“Little Women” is a 1998 opera written and composed by Mark Adamo, based on Louisa May Alcott’s widely read novel of the same name. Featured as Ithaca’s annual collaboration between the Department of Theatre Arts and the School of Music, it is directed by Patrick Hansen and conducted by Brian DeMaris.

The opera’s primary theme looks at holding on to the way things were versus facing the reality that life is ever-changing. Jo begins the opera piecing together how Amy had ended up going off to Europe and marrying Theodore “Laurie” Laurence, a man whom Jo had previously rejected, played by senior performance and voice major Torrance Gricks, and how Jo had ended up with less success than she had hoped for. The opera then travels back 3–4 years and journeys through the four sisters’ lives in New England during the Civil War.

“Sisters love it, anybody who knows about sibling rivalry or anybody who’s a lover of 19th century literature,” Hansen said. “When I’ve gone to see the opera, you have whole families that come. It’s a cross-generational opera.”

As a creative twist, Hansen personifies the characters of the four Alcott sisters, whom the March sisters are based on, as opposed to using four distant background voices to symbolize them in Adamo’s original version. The Alcott sisters are there observing the story and sometimes represent the opera’s more emotional aspects.

Set to a ghostly operatic score that mixes English speech into its lyrical style, “Little Women” brings music to a classical story of family life, defying gender stereotypes of the 19th century with strong female leads.

“Flight of the Heart”

“Flight of the Heart” is an original dance concert created, directed and choreographed by Roy Lightner, Lindsay Gilmour and Amy O’Brien, dance instructors at Ithaca College. Solely showcasing dance to tell its story, it comprises three dissociated movements: “Hop On, No Stops” by O’Brien, “Tiny Rebellions” by Gilmour and “Under the Covers” by Lightner.

Each movement of the performance features its own artistic style, production and distinct choreography. There will be three separate themes that correspond to the overall cumulative theme of human values and issues of the heart, while at the same time displaying dance as a representation of flight.

“I personally think dance is the closest thing to flying humans can experience,” Lightner said. “The title’s a play on words, because not only are we dancing, but the audience is getting three individual tastes of three different unique people.”

“Flight of the Heart” will include dance styles such as modern, hip-hop, ballet, street jazz and traditional, with separate musical accompaniment.

“Under the Covers” features mostly musical covers of popular songs, being the only performance of the three that tells a story. “Tiny Rebellions” brings a number of conflicts into perspective, such as nature and technology as well as masculinity and femininity. “Hop On, No Stops” employs the concept of taking family memories and life experiences and using them as patchwork and the layering of one’s identity.

“Hop on the ride of life, because there’s no stopping,” O’Brien said. “After you leave the nest, you experience your own things. How you deal with that experience is what you were taught when you were a child.”

Because dance concerts are biennial productions at the college, “Flight of the Heart” will be the only Main Stage dance concert until the 2016–17 academic year.

“You Can’t Take It With You”

“You Can’t Take It With You” is a 1936 three-act comedy written by George S. Kaufman and Moss Hart and directed by Susannah Berryman. The play is set in a wacky household, inside which live the Vanderhof, Sycamore and Carmichael families.

“It’s a very exaggerated way of living,” senior Stage Manager Kelly Frisch said. “When you open that curtain, it’s just an unbelievable-looking house. It’s not from the same world that we’re used to.”

As such, Alice must face the difficulties of her family life getting in the way of her relationship with Tony. Hilarious antics begin to ensue when the two polar-opposite families become acquainted with each other.

The play’s central theme contrasts willingness to follow one’s desires with the pressure of staying in the status quo and conforming to societal standards, jostling Alice between family and love, and pitting Grampa against Mr. Kirby’s button-down, status quo way of life.

“[Grampa] kind of goes along with this idea that Mr. Kirby is working on Wall Street and he’s making all this money, but if he’s not doing anything with his life, then why is he even doing that?” junior Assistant Director Danica Kelley said. “Finding what you enjoy in life and spending your time doing what you want to do is the big one here.”

The show previews April 14. Opening night is April 16 and it runs until April 25 in Hoerner Theatre.