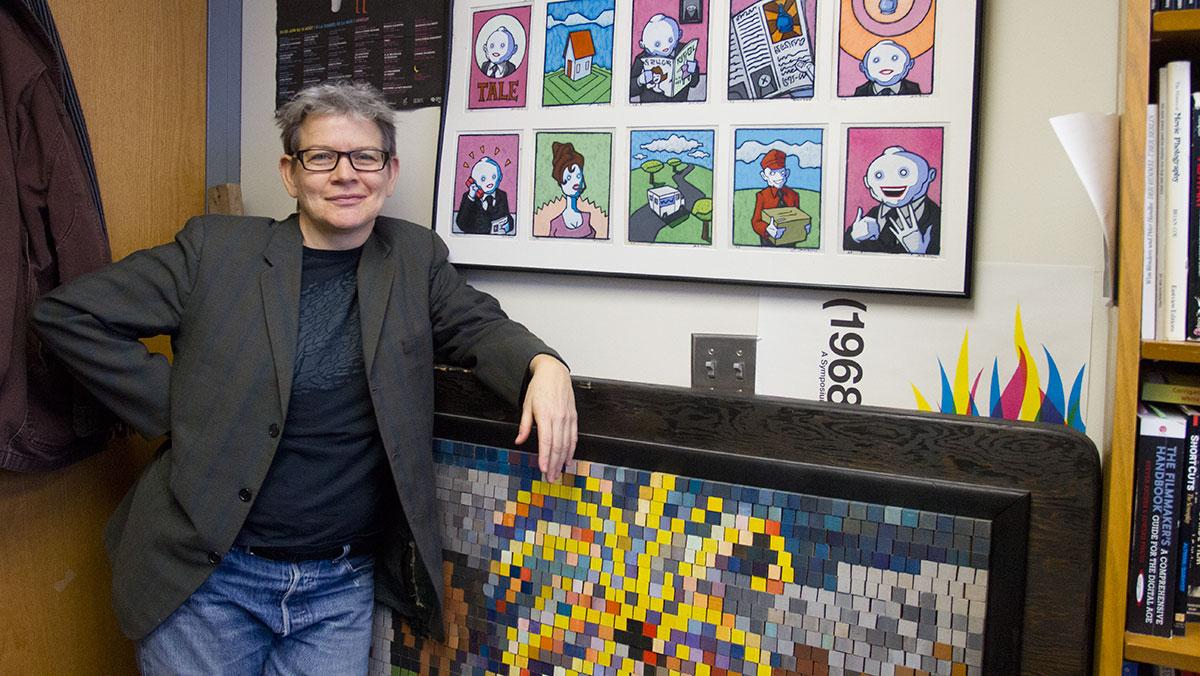 Creating 16mm films ranging in topic from mortality to a man’s last meal for over 20 years, Cathy Lee Crane, professor of cinema and photography, has had her work featured worldwide. Her films have been shown on television in Germany, Austria and Switzerland, as well as on the Southern Circuit in the United States in 2003. Crane was the 2013 recipient of the Guggenheim Fellowship in film-video.

Crane’s short films from 1994–2010 will be featured Feb. 21–22 during the “American Originals Now” series at the National Gallery of Art in Washington, D.C. The series focuses on internationally known artists from the Americas who come to the gallery to share their current practices and production methodologies with visitors.

Contributing Writer Cristina Saltos spoke with Crane about her upcoming feature and her life as an artist.

Cristina Saltos: What elements do an idea or story have that make you want to turn it into a film?

Cathy Crane: Usually, it starts from something I’ve read. In fact, all the films that I’ve made have started from either a biography, piece of fiction or historical account that I have encountered by reading. For instance, “The Girl from Marseilles” is in dialogue with its author, French surrealist Andre Breton. I read his book entitled “Nadja” and decided I wanted to make a film from her point of view.

CS: Are there specific challenges when you take what you’re thinking about and turning it into a piece of screenwork?

CC: At every juncture there’s the challenge of what I think of as translation. There could be a number of images that come to my mind while I’m reading a book, but that doesn’t necessarily structure it in terms of the story. I’ll then have to write, do an adaption of my original images and work directly with the text to try to find a structure for it. Then I have to translate those written words and ideas into images. That is a whole other chapter of transition where the idea always changes. Then I have my material, which I get back from the lab because I shoot most of my material in film. Then I get the material back, and I edit it. That’s where the film really comes into being. Sometimes it might take on a set of new concerns.

CS: Your works from 1994–2010 will be featured at the NGA. How do you think these films reflect your growth as an artist?

CC: They were all shot on 16mm film. The thing about that period is that it’s hard to know how much longer I can continue to shoot my film on film. In that way it’s of a time and of a beginning really. Those short films in my opinion constitute my life as an emerging artist. I would say since 2010 I’ve entered into what’s oftentimes called the “mid-career.” I think I’m making more mature work, longer work, utilizing actors now in a more pointed way.

CS: How do you think being featured with the NGA will shape the rest of your career?

CC: Well it’s hard to know, but I would say that it puts me firmly in the ground of fine art. I think it positions my work and my practice there, which is not to say it can’t be commercial film. But it seems clear right now that I have a particular destiny at this stage in my career to continue to consider the language of cinema so that my own practice is not just about the content but also about the form and innovating within the form of what is known as a single channel projection. [This means] that you just sit down and watch a film being projected in front of you rather than in hyper-length on various online platforms or anything like that. I’m constantly asking what the limits are of a single channel projection. I don’t know how people will respond to it. I hope they enjoy it.

CS: As a person who is now in the middle of her career, is there anything you would say to aspiring filmmakers?

CC: The only thing I have to say is based on my own experience. I didn’t start making films until I was 30. So for me life is to be lived, and you don’t need to ask anybody’s permission to express yourself. I think sometimes young artists feel that they can’t say what they really want to say or say it in a way they feel they would like to say. I would say don’t worry about whether your work was going to be “commercial.” Think about what you want to communicate and say to human beings.