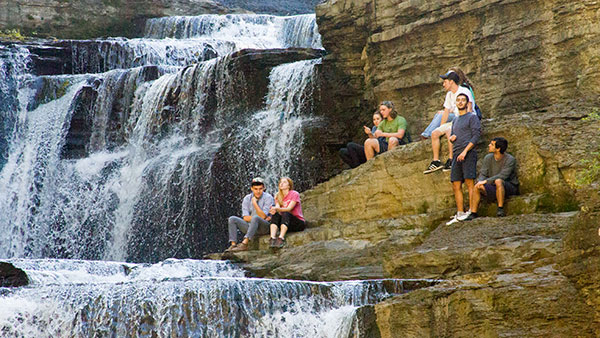 It is Sunday afternoon. While most students are rushing to finish their homework, seven new members and three officers of Explore Magazine lounge at the top of the waterfall on Six Mile Creek.

Explore Magazine is a new publication on campus this fall. Junior Caitlin McCaul, founder of Explore Magazine, said she wants it to be a resource that Ithaca College students reach for to find out about all things outdoors, including teaching readers how to set up a tent and educating them on where to find trails near campus.

“I want it to be a major resource for people on campus, so they know where things are going on or how to do things or where to rent equipment,” McCaul said.

McCaul started Explore Magazine with the help of four friends, junior Trevor LaRose, senior Anna Foltzer and sophomores Sam Rubin and Tatiana Malkin, all of whom serve as officers for the organization. McCaul, who is switching from an outdoor adventure leadership major to an English major, wants to write adventure journalism after graduation. She said she was surprised to find there wasn’t already a magazine like this on campus.

McCaul said Explore will be published using WordPress, although a web address has yet to be claimed by the magazine. She said the magazine will ideally be published once a month, with their first issue going online in early October with a goal of 10 stories.

However, LaRose said Explore will be more than just a publication.

“It’s called Explore, and that’s really what it’s all about: just exploring Ithaca and everything it has to offer,” LaRose said. “So a big part of it is going on group trips.”

Rubin said the officers hoped the hike on Sunday would be a fun way for members and officers to not only get to know each other, but also get a feel for what the magazine is all about.

“By getting our club together and exposing them to things here, it’ll give them the opportunity to get hands-on and get started,” McCaul said.

Rubin said the hike on Sunday was designed to be more of a bonding exercise, as opposed to the camping trips and other outdoor adventures he expects members to do on their own. He anticipates visceral writing will come from these excursions.

“I want the writing to be very experience-based,” Rubin said. “Kind of like National Geographic, where they have the writer and photographer go out and have this incredible nature-based experience.”

And it doesn’t have to stop at secondhand accounts and photographs. The magazine officers were unaware of the funding process through OSEMA until it was too late and therefore have no funding at the current time. This means the first several issues will have to be published solely online. Rubin said the benefit of this is that they’ll be able to work video and audio into the mix of articles and photo essays.

“If something happens to you in your tent at 2 a.m., instead of just writing about it — if there’s an animal or something — it’s a lot cooler if you can take a video of it,” Rubin said. “I think online can be a little bit restrictive in that you don’t have an actual copy, but it’s also freeing.”

One problem the officers of Explore foresee is becoming a well-known publication on campus without having hard copies available in the Campus Center or other frequented areas, where students can easily grab the most recent issue on their way to class. McCaul said she is currently trying to get the magazine on the Student Organizations tab on Intercom. In the meantime, she said she plans on advertising the first issue of Explore by posting flyers around campus.

The officers are hoping to get a couple of issues under their belt and then will try to get more funding.

“I think our focus right now, for the first month, is let’s get 10 stories, let’s get solid content to put on the website to show people that we’re serious, that we want to have this outlet on campus,” Rubin said.

Over 100 people signed up at the organization fair on Sept. 3, and roughly half of those who signed up came to the interest meeting on Sept. 8.

“It’s kind of a testament to the interests of the people who go to this college,” Rubin said. “Obviously you don’t come here and go, ‘Wow, I hate the outdoors,’ because it’s everywhere and it’s beautiful.”

At the first meeting, McCaul established that Explore should never come from just one person’s vision. McCaul said she wants to make sure Explore is a collaboration that brings together the interests of students across campus. Rubin said the officers are comfortable with the magazine developing organically and changing with the members’ changing interests.

The officers agree that aside from deadlines, Explore Magazine won’t have any restrictions on content, so long as it is outdoor-related.