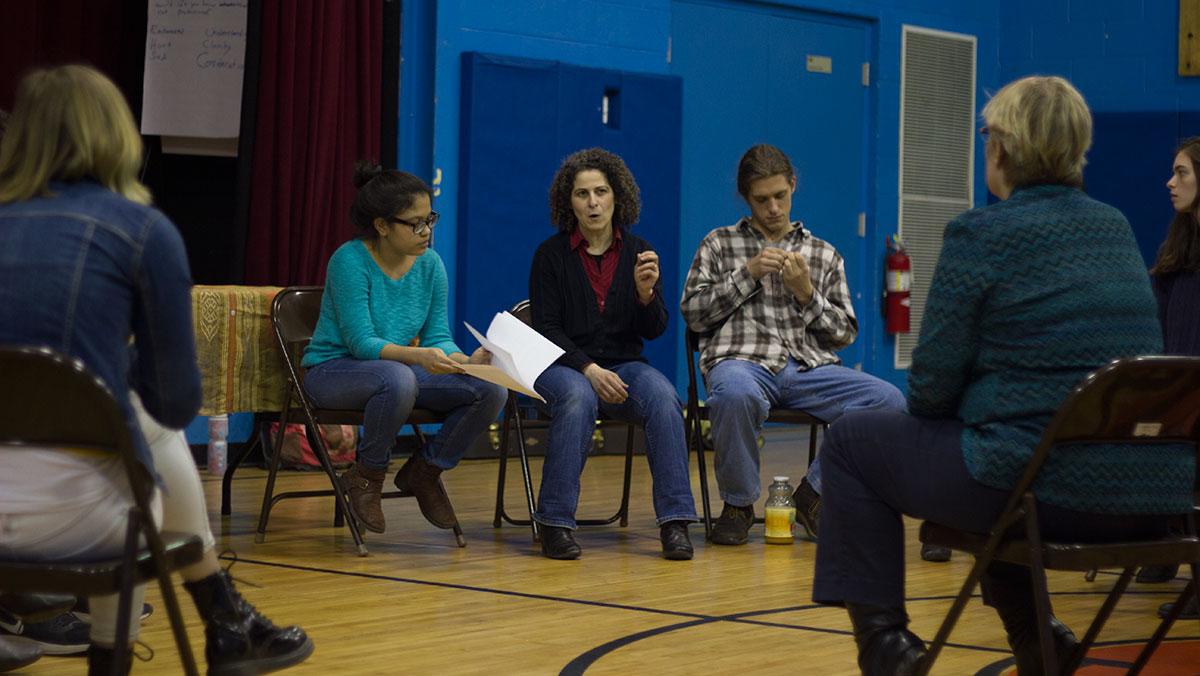 In Ithaca College’s Teatro class, students are faced with the task of putting on two short plays. Though the acts are only 10 minutes long, it’s no small feat: The plays are both bilingual and cater to three very different audiences.

The college’s Teatro course has students spend a semester in the fall writing plays and in the spring producing them for an audience. This year these plays come in celebration of the 50th anniversary of the realm of activist theater known as Teatro Campesino. Both the college’s Teatro and Cornell University’s Teatrotaller students performed in Wooster, Ohio, on April 10 and will be performing at the Greater Ithaca Activities Center on April 18 and Dartmouth College on April 25.

The two plays, “La familia moderna” and “Las noticias,” were written by student groups last semester in the Spanish course Teatro, offered by Annette Levine, professor of Latin American and Latino/a literature and theater. This semester, their acts are hitting the stage, with acting and stage direction decided entirely by the students.

Each play, or “acto,” is 10 minutes long and focuses on a specific issue that currently affects the Latino community. “La Familia Moderna,” in English “The Modern Family,” follows an immigrant Colombian family that is struggling with fitting into American society. “Las Noticias,” which translates to “The News,” is about a migrant family composed of a wife, husband and child. After the father is deported, the mother has to face the challenges that come with being alone in a foreign world.

The student teams that wrote each play were faced with the challenge of bringing awareness to issues that their audiences may not be familiar with, including unfair treatment toward immigrant families and unequal pay for Mexican farm workers. Senior Max Ocean co-wrote “Las noticias” and said it’s a personal story that places an emphasis on the anti-immigration messages portrayed by the media.

“The title sort of organically wrote itself,” he said. “The idea is that the story being told is a personal one, but we’re blending in all of the media messaging that sort of pervades in the U.S., which is mostly anti-immigrant.”

In addition to writing, Ocean is starring as the lead male role in his play. He said he is playing an unnamed farm worker that represents all Mexican migrant farm workers.

“La Familia Moderna” centers on the difficulties that immigrant families face in today’s society. Junior Emma Rizzo is acting as the mother in this family and said Teatro has done a great job of getting people out of their comfort zone.

“It brings awareness to different culture issues outside of our campus,” she said. “It’s getting us out of our Ithaca College bubble. In terms of the presentation, it’s educating the public about this issue that’s not just giving them data. It’s a realistic example of a person who lives this every day.”

El Teatro Campesino began in 1965 when founder Luis Valdez used these performances to provide a voice to farmers working under unfair conditions. They were originally performed on flatbed trucks and in union halls with minimal costumes and simple sets.

Sophomore Nathiel Tejada said she was honored to be a part of the 50th anniversary as she sees Teatro as a vital program.

“Teatro is doing the work that needs to be done on campus,” Tejada said. “It defends the stories that need to be told and need to be shared. I believe that any type of art can really have an impact on others. I respect the group a lot, and that’s why I come back whenever I have the time.”

Levine has been teaching the Teatro course at the college since Fall 2006. She said the class came to be after it was invited to perform in a theater festival by Cornell’s Teatrotaller in 2006.

“After that experience, I knew it was something we had to keep going,” Levine said. “It was an amalgam of students, theater and language students working together to create something in Spanish … Little by little I became more integrated into the whole production of the shows and realized we could really have something if we made it a class and made this a regular thing.”

Levine gave the students an additional challenge of working without a director in their groups. She said it was to make the process feel like more of a collaborative effort instead of going with the traditional theater approach. Ocean said while not having directors was a challenge the outcome will ultimately be positive.

“It’s a component that’s helped us embody Teatro Campesino because it gets everybody involved, and it’s sort of a back and forth process of ideas,” Ocean said. “What’s really great about it is that everyone really has been involved in creating this production and being a part of the final vision, which is pretty nice.”

Rizzo said programs like Teatro are ultimately positive in that they highlight relevant cultural issues.

“I think that the issues of illegal immigration and of farm workers is something we feel very distanced from because we have don’t have students in this setting, but it’s something very real that’s going on right now,” Rizzo said. “By doing this, it humanizes the situation a little bit and commemorates this really cool aspect of this country that we really don’t hear about that much.”