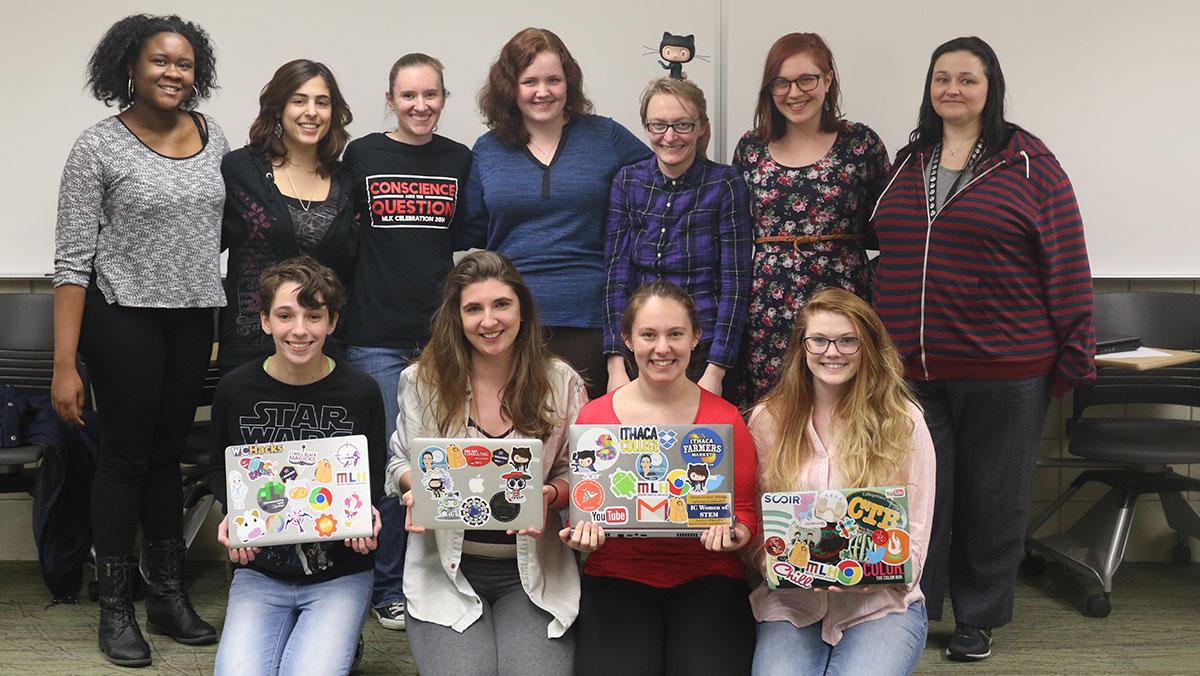 Alexis Liberatore/The Ithacan
Members of IC Women in Computing show off some of the prizes they won from the hackathon event.
By Kalia Kornegay — Staff Writer
Published: March 22, 2016

The Ithaca College Women in Computing club was filled with smiles and laughs all around during its last weekly meeting. There was much to celebrate after both of its teams won awards at the Rochester Institute of Technology WiCHacks hackathon event Feb. 27–28. Sunglasses, laptop stickers and T-shirts were dished out to every member as the group celebrated its wins.

Hackathons are collaborative events at which participants work together to create something in 24 hours based on a theme given by the coordinators. The themes for this hackathon were to create a program teaching someone how to code, one advocating for women or a wildcard option, where the team could design whatever it wanted.

Three members, seniors Mariah Flaim and Caitlin Wormsley and junior Shelby Cohen, tied with another team for the “Most Novel” award with their iOS application called “ResuMatch.” During the meeting, Flaim, the club’s president, described the app as being a “Tinder” for resumes. Companies interested in hiring would be able to swipe through people’s resumes and then generate a list of possible candidates.

The other team, consisting of seniors Beth Dellea and Kelly Sadwin, junior Carrie Lindeman and sophomores Chiara Marcario and Kristina Keenan, designed an interactive game called “Ada’s Pages: The Forgotten Code,” under the theme of teaching someone how to code. Users moved the character around a map in order to find a piece of code used in computer programming. Their game won an award for using server space on Amazon’s web services.

ICWC started in 2015 as a way to encourage and support women in the computer science field. Since its inaugural year, the club has hosted a variety of workshops for students and is planning to visit Google’s New York City office later this spring.

Flaim said the decision to go to a hackathon this year came after a few members went to one in 2015. She said they came back incredibly positive about their experience and wanted to share it with the rest of the club. This year’s executive board members pushed for more members to come, which Flaim said resulted in eight women coming out and having a fun time.

“It’s not the pressure of handing something in — it’s the pressure of getting something done,” she said. “There’s no pressure of making something perfect or meeting the professor’s guidelines, so you have this opportunity to build as much as you can in 24 hours and work with other people. You gain this new experience of ‘Wow, this person is amazing! They can do all these different things!’ So we knew that that was the kind of experience we would have, and it was great overall.”

In a study released by the American Association of University Women the number of women in computing and mathematical fields has dropped from 35 percent in 1990 to 26 percent in 2013. Clubs focused on women in computing are sprouting up in universities and colleges across the country as a way to build confidence in women looking to pursue the field as a future career.

Keenan joined the club after taking computer science classes and wanting to meet other women in the field. She said the hackathon was her first major event with the club and that it left her with a renewed sense of confidence toward her field.

“Although computer science is for everyone, there is a noticeable disparity between men and women,” Keenan said. “Not as many girls might feel as comfortable in situations because they feel like they’re not worthy of it even though they are. It’s a big confidence builder. My confidence in my computer science classes has definitely been built by talking with girls who’ve had different experiences.”

ICWC is still going strong with several upcoming events before the end of the spring semester. As for personal research projects, Flaim is working with her hackathon team to get ResuMatch on the App store as soon as possible. Meanwhile secretary Dellea and Sadwin, members of the club, are studying how gender plays a role in the way people interact online.

“Our idea is there have been a bunch of linguistic studies over the years saying when women speak, we tend to use more qualifiers instead of delivering information directly,” Dellea said. “There are people these days that try to say if women want to be taken seriously, they need to stop starting sentences like that. So what we’re trying to see is when you’re speaking to someone of a specific gender, how does your language differ from what those studies found.”

Flaim said events specifically catered toward women in computing and other science, technology, engineering and math fields were important for everyone. She said hearing about the positive and negative experiences other women have faced, while simultaneously exposing themselves to other computer programming skill levels, has helped her and others develop a strong support network.

“It’s really important to show that we are just as capable as anyone else in doing literally anything we set our minds to,” Flaim said. “Obviously, there is the whole idea there aren’t a lot of women in STEM, but when you look at how many are in computer science, it’s even lower. I think these events promote more and get it into people’s minds that we are in computing, we are real computer scientists, and we can do everything you can do.”