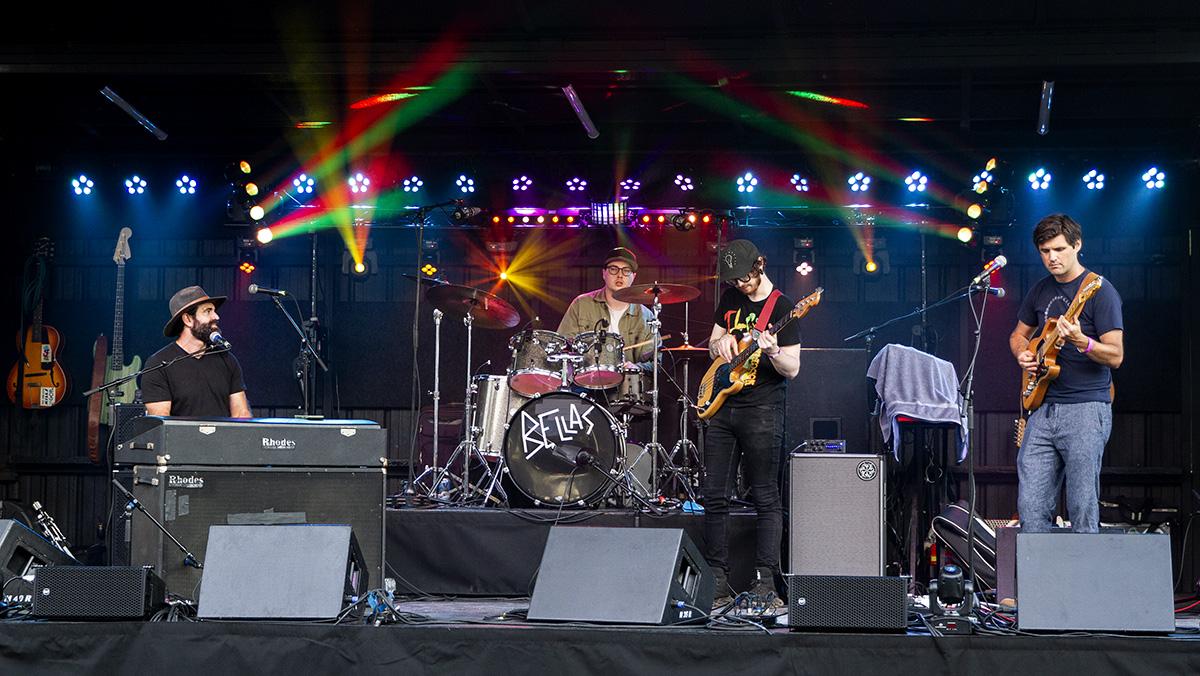 Beneath the warm glow of fairy lights, the sound of reggae and funk music filled the air as artists happily talked to guests about their art, and Ithaca creatives convened to dance the night away in a celebration of music, art and life.

The Ithaca Night Bazaar began for the first time in 2022 and runs monthly from May to September at the Ithaca Farmers Market with an eclectic mix of visual artists, vendors and performers. The bazaar takes inspiration from Asian street markets and European music festivals, welcoming a diverse crowd to peruse through the booths while enjoying live music. The Aug. 18 market featured artists, including Subdub, Bella’s Bartock and Ithaca local Road Man — as well as a performance by Parlor City Burlesque.

Jack Clausen, one of the event’s organizers, said the bazaar was a joint effort between him and his wife Sarah Clausen to support local and regional artists. Jack Clausen said he was especially surprised that there were no events like the bazaar in Ithaca prior.

“We were just talking about how it’d be super cool to do one of these late night markets, introducing different ideas and different aspects,” Clausen said. “Not just the food but apparel, vintage things … and then mixing a live music element as well.”

Jonathan Petronzio ’04, performed on stage with his solo experimental music project, Road Man, which mixes funk, blues and reggae through the lens of introspection and environmentalism. Petronzio previously performed with the funk band Revision — producing six albums and touring across the United States with bands including Sublime, Groundation and the Easy Star All-Stars. After turning away from the hustle and bustle of life on the road, Petronzio said he created Road Man, which documents the past seven years of his life.

“In all the traveling that I did, I never really found a place that was so special,” Petronzio said. “It took years, but we did it. … Everybody comes together and you get to see this beautiful local community of people who love live music. … Even though it’s a small town, [there is] a lot of rich music.”

Russell Posegate, instructor in the Department of Music Theory, History, and Composition, said it was his first time at the bazaar and that while he came to support Petronzio, he was also pleasantly surprised by how many people came out to support music and the arts. In the wake of the COVID-19 pandemic, Posegate said that it was especially important to support live music.

“I’m glad that there are so many people who are willing to come out for live music,” Posegate said. “It’s really encouraging to see.”

The effects of COVID-19 deeply impacted the concert industry, with many artists forced to close or postpone live shows in 2020 following the outbreak. In 2021, live music began its slow recovery as artists began to reconnect with fans and venue operators grappled with balancing COVID-19 restrictions with a desire to return to normalcy. With venues reopening, the next challenge lies in getting people to attend live concerts. Petronzio said he was glad to see there was still a need for it.

“The pandemic really shifted so much to the outdoor venue,” Petronzio said. “So even though it kind of feels like the tail end of that chapter, it’s kind of cool too that things shifted toward these kinds of venues that normally wouldn’t have had that same kind of draw. And we don’t play a whole lot. We’re hoping to play a lot more in the coming year.”

Olivia Gillespie, owner of Baked by Liv, said she was a first-time attendee at the bazaar. Gillespie said she initially heard about the bazaar while vending at the Freeville Farmers Market in Freeville, New York.

“There’s a lot of variety, which is really cool,” Gillespie said. “And in terms of the vendors that are here, I’ve heard great things about it just through social media and word of mouth. And so I’m just really excited.”

Becoming disillusioned by online classes during the pandemic, Gillespie said she decided to take time off from Cornell University in 2021 to focus primarily on Baked by Liv.

“I think there’s so much to be said about sharing with other people,” Gillespie said. “And, just like, the connection you have when you do something like that. I love seeing how happy little kids’ faces and adults’ faces light up when they see cookies and things like that.”

Similarly, Brighit May, a local witch and jewelry artist, said she took the pandemic as an opportunity to step away from retail work to create a business on her own terms. After losing her job due to the pandemic, May said she turned her attention toward figuring out what she wanted to do for herself.

“My main prerogative every day is just to have as much fun as I can,” May said. “The more I [made jewelry], the more fun it was, you know, printing things out, getting more and more competent at the machine, seeing like, what can I do? You know, how can I take the things that I can have and branch them out? What do I make for myself that I can make for other people? What delights me and might delight other people?”

Huyen Tang, owner of Suede Moon, said he was also in attendance at the bazaar for the first time. Tang said she was inspired by the celestial — turning her love of crystals and mushrooms into a business selling rings, necklaces and candles. The bazaar, Tang said, was a great opportunity to meet like-minded creative individuals.

“I think that’s really cool because right now it’s like a side gig for me,” Tang said. “I’m seeing people who were like, oh, yeah, I worked on this for two years, and now I do this for a living. That’s what I want [to do], so it’s really inspiring.”