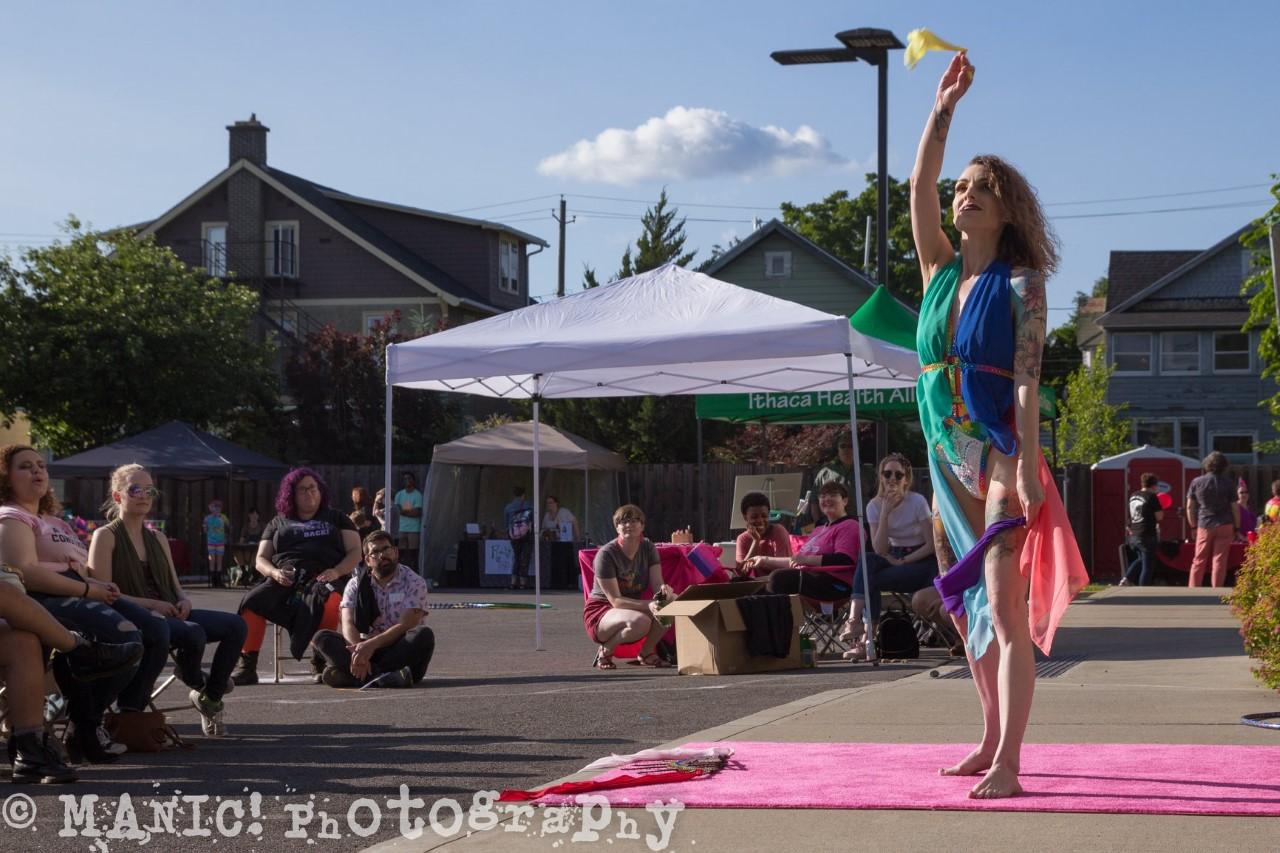 Courtesy of Manic Photography
The Downtown Ithaca Alliance will host Pride Week from June 26 to July 3, with events including drag performances, dance parties and documentary screenings.
By Matt Minton — Staff Writer
Published: May 5, 2022

The Downtown Ithaca Alliance (DIA) will be hosting pride week for the very first time this upcoming summer. As the temperatures rise and the academic school year comes to a close, the DIA is readily preparing for the festivities.

From June 26 to July 3, DIA will be organizing their very first Pride Week. The DIA, founded in 1997, is a non-profit organization in charge of development, promotion, revitalization and management of Downtown Ithaca. According to its website, the DIA’s mission is to work towards a more inclusive and representative town by effectively addressing issues that face the community and its surrounding neighborhoods. Pride Week will contain a series of events including drag performances, dance parties, a documentary screening at the Cinemapolis on the anniversary of Stonewall on June 28, 1969, and educational opportunities including a book club launch to discuss gender transition. Participating local vendors include Red Metal Jewelry, Via’s Cookies and Sciquatic Arts — among many others.

Pride Month is a celebration that honors the ongoing battle for the rights of lesbian, gay, bisexual, transgender and queer-identifying individuals. Following the Stonewall riots, gay rights activists proposed the idea of a march. The marches were a series of demonstrations by the LGBT+ community — led specifically by trans women of color — responding to a police raid at the Stonewall Inn, a gay bar in Greenwich Village. A year later on June 28, 1970, the first march occurred in New York City, inspiring other members of the LGBT+ community along with allies across the country to also march alongside them.

Gary Ferguson, executive director of the DIA, said the DIA is excited to launch a new initiative of hosting and organizing Pride Week for Downtown Ithaca.

“The Downtown Ithaca Alliance is excited to … help celebrate Pride Week here in Ithaca and Tompkins County,” Ferguson said via email. “This is a great opportunity for both local residents as well as visitors from throughout the northeast wishing to explore and experience our community.”

Danny Palmer, assistant director of special events of the DIA, said he is heavily involved in organizing the Pride events by strengthening community connections and working together with the other team members. Palmer said that while he originally worked with community organizational groups in Rochester, Ithaca is a uniquely passionate and present community.

“The level of community involvement and interaction here and the truly person-based style of festival celebration definitely drew me in,” Palmer said. “I’ve been to a lot of places, but there’s really nothing quite like [Ithaca].”

Pride Week will open June 26 with a virtual author event held on Zoom featuring local transgender author Elliott Deline along with an in-person kick off at Buffalo Street Books on the same day. Deline’s books include “Refuse” and “Show Trans,” and his essays and excerpts have been featured in The New York Times. Palmer said that Deline’s writing is heavily influenced by his own experiences with being transgender.

“[The Downtown Ithaca Alliance] wanted to highlight folks from the LGBT+ community who are producing art and work that depict a wide variety of experiences and explore where we have similarities and where there are differences in experiences,” Palmer said. “Elliott’s deeply personal storytelling is a great representation of one such perspective of individual experience and powerfully colors his fiction, making it deeply relatable.”

Palmer said that his team made it a point to keep the events substance-free due to how the LGBT+ community is frequently more affected by substance use. He said that they will also include connections to mental health and harm reduction resources as well as legal assistance information for name and gender change processes.

“We want to celebrate and have a great time, but it was important to us to also be aware of the disproportionate impact of substance use and abuse on the LGBTQIA+ community,” Palmer said. “Our aim is to go beyond entertainment and to treat this as an opportunity to build connections and strengthen our community.”

Darlene Wilber, communications and grants development director of the DIA, helps to promote the Pride event, develop their external communications strategy and handles media inquiries. Wilber said that since this is the DIA’s first Pride event, she hopes the Ithaca community will check out all of the opportunities they have to offer.

“[Our event] stands out because it will provide educational and entertaining opportunities,” Wilber said. “Ithaca is diverse and inclusive; we here at the Downtown Ithaca Alliance value and support the LGBTQIA+ community. Organizing and promoting pride is one way to help demonstrate our support of the LGBTQIA+ community.”

Palmer said that community can be a loaded word, as one can provide a lot of support but can also leave people falling through the cracks. He said that his own experiences in the worst parts of the nightlife and substance fuelled LGBT+ scene has led him to live with PTSD.

“‘Out of the bar and into the streets’ has been a long-time echo throughout the LGBTQIA+ community from the very beginning, and more than 50 years later, our community is still often relegated to nightlife,” Palmer said. “I saw a need, and thankfully have support from other businesses and partners who do as well … For me, this is about the fact that sometimes being a member of the LGBTQIA+ community is hard, but we can certainly do more to build up than tear down.”

A Hispanic student’s sense of poder and pride at IC