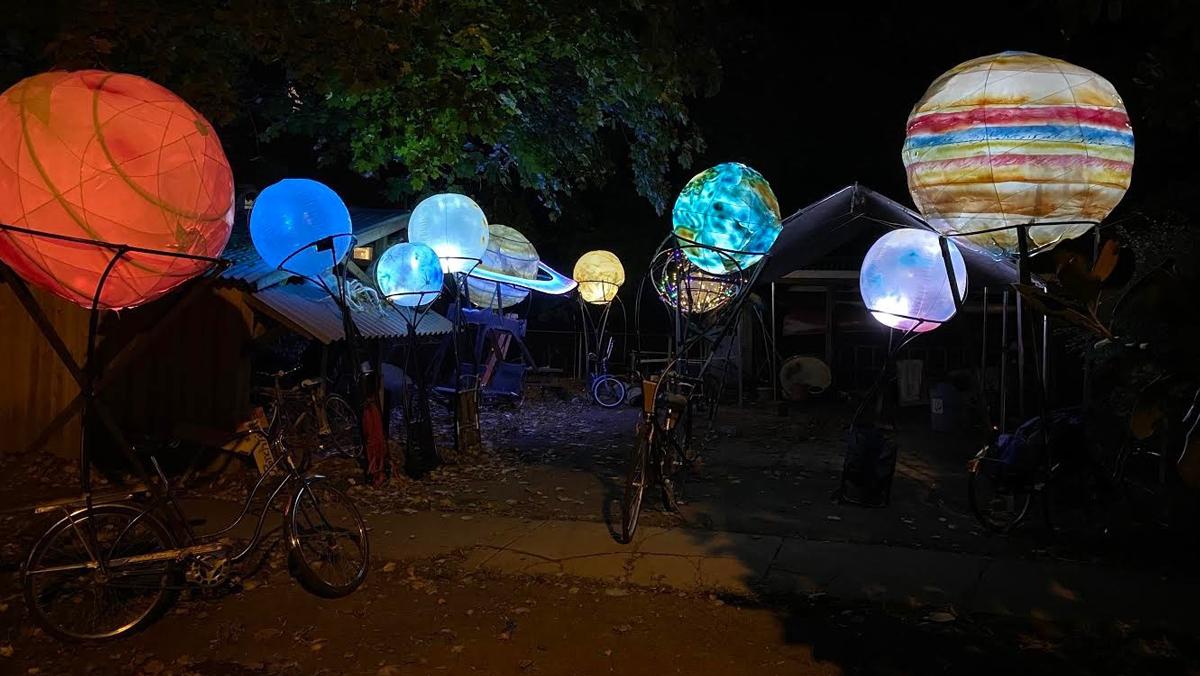 On Halloween night, The Commons in downtown Ithaca will be adorned with spooky costumes and decorations alike. However, passersby will be surprised to see glowing bikes riding the streets, with all eight planets, the sun and Pluto in tow.

Starting at 6 p.m. Halloween night at Hickey’s Music Center, Dave Davies and his band of bikers will set off on bright bicycles with 19 sculptures made by local artists. Along with the solar system, there will be a caterpillar, a bowling pin, a spider, a circus tent and more. At approximately 7 p.m., they will make their way down North Tioga Street to The Commons, where they will display a re–creation of the planets revolving around the sun along with all the other sculptures.

“This is an unusual year because if you’re not going to trick or treat, what are you going to do?” Davies said. “Instead of trick-or-treating, I’m already hearing, ‘Let’s do that weird bike parade they always do!’” 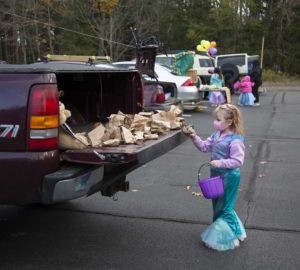 Fiona Nicholson, dressed as a mermaid for Halloween, trick or treats Oct. 30 at the Bethel Grove Bible Church Trunk or Treat in Ithaca. Jill Ruthauser/The Ithacan

Because of the COVID-19 pandemic, Halloween festivities are looking a little different this year. The Tompkins County Health Department (TCHD) has classified traditional trick–or–treating as a moderate–risk activity, causing local residents to become more creative in how they can still celebrate the day. Members of Facebook groups and online communities, like Ithaca Issues, have said they will be putting up signs that say they will not be handing out candy. Some community members are finding ways of distributing candy to trick–or–treaters using devices like polyvinyl chloride, or PVC, pipe and other methods to make trick-or-treating possible. Other locals are hosting events that allow for social distancing.

“Halloween night is one of the only nights you can really do this, and people really appreciate it,” Davies said. “Anything to get people out of their hunkered–down COVID mindset, to me, is a really important thing to do.”

For Ithaca College students, Halloween is typically spent on campus with friends. Sophomore Kurt Mannick is at home for Halloween this year. He has been getting into the spirit with his family, carving pumpkins and decorating the house. He said that keeping in touch with others from campus has been hard but that he wants to celebrate Halloween with friends.

“There might be a Zoom call that some of the people from my dorm last year might attend,” Mannick said. “Maybe I’ll put on a witch’s hat or a mask and have some fun there.”

He remembered socializing last Halloween and how he had fun being with his friends during the holidays on campus. He liked how the dorms were decorated and people would wear costumes around.

“The main thing that I look forward to during holidays on campus is that you’re there with people, and that can’t happen this year,” Mannick said.

As for students who are in Ithaca, senior Ariyahna Bernard is celebrating with her roommates and neighbors this year. She said Halloween is her favorite holiday, so she worked with her friends to organize a small gathering.

Bernard said that there may be trick-or-treaters showing up at her door. Though she was not aware of the TCHD guidelines regarding Halloween, she said that she is taking precautions anyway to stay safe.

“I’m hoping that, not just with Halloween, with things in general, that people are a little more safe and concerned about health, with how they party if they’re a college kid, how you have gatherings with family and children,” Bernard said. “I’m hoping that COVID’s not just going to go away and we’re going to forget about safety concerns.”

While celebrations all over are limited this year, Bethel Grove Bible Church in Ithaca has been one of the local organizations that is keeping trick-or-treating going. The church is hosting a trunk-or-treat event from 4 to 8:15 p.m. Oct. 30. The first hour of the event will allow families to walk from car to car and receive candy from the backs of cars in a socially distanced manner. The last hour of the event will be drive-thru trick-or-treating. 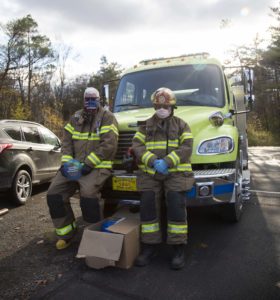 Ithaca community members Rachel and Jeffrey Thompson are two of the five church members organizing this event. They worked with TCHD to make sure the event goes smoothly.

“I think one of the biggest questions was, how are we going to get the candy from our hands to the guests’ hands?” Rachel said. “And thankfully, there’s a lot of really creative out ideas out there. I will share that one community member had a great idea of tossing the candy from us to the kids.”

Despite the restrictions, like being unable to have more than 50 people there at a time, they are working hard to make the event something memorable for the community at large.

“I hope that children will be able to look back at this event and not feel anxiety but to be able to remember the good things about it and maybe even some fun, unique aspects,” Rachel said. “As adults, they’ll be able to maybe joke around about wearing masks and that one Halloween when we went to that trunk or treat and people threw candy at us.”

Jeffrey works as a youth pastor and he noticed that morale among children has been falling during the pandemic. Schools in the area, including the Ithaca City School District, have been closed or on hybrid schedules because of the spread of the virus.

“I think hope [is important], putting hope back in people’s lives,” Jeffrey said. “Just an opportunity to love people, and I think seeing the hope in people’s eyes is the thing I look forward to the most.”