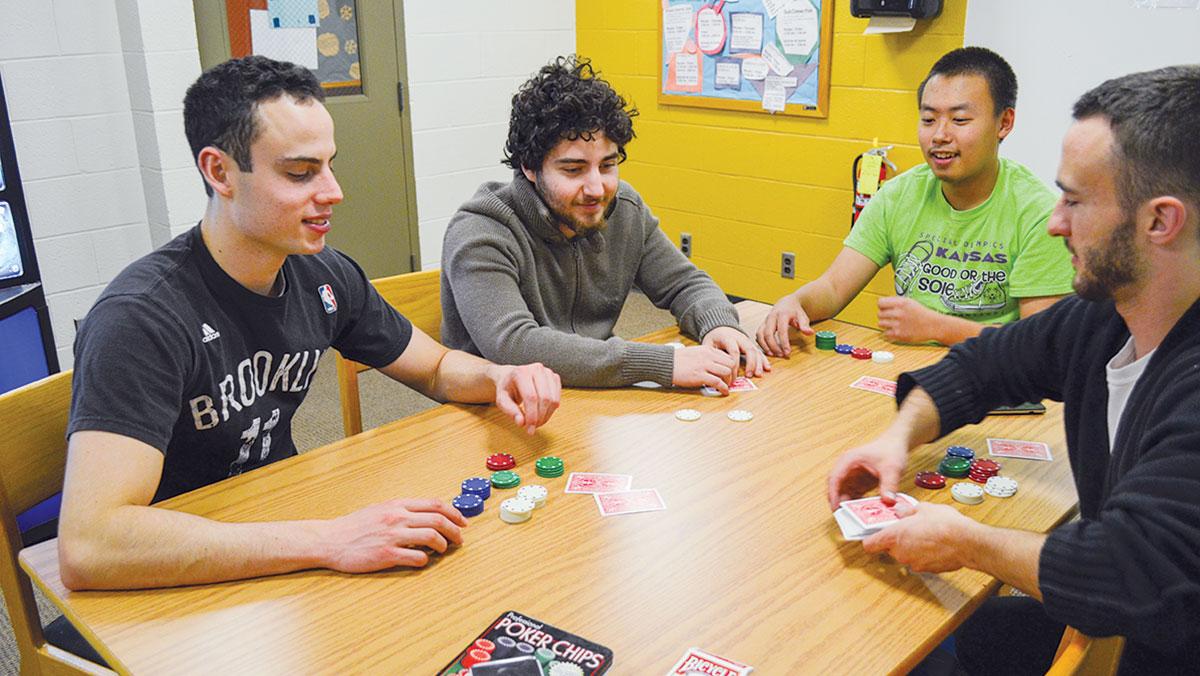 MAX GILLILAN/THE ITHACAN
From left, freshmen Charles Mauser, Gabriel Bosco and Jimmy Tang and junior Sean Themea sit down for a round of poker Dec. 4 in the Boothroyd Hall lounge. Tang said he has been a fan of poker since his upbringing in China.
By Mary Ford — Staff Writer
Published: December 10, 2014

Card games may be a casual hobby to most, but the world of professional poker is becoming more prevalent with television and the Internet providing easy access to participation in professional poker tournaments. Inspired by poker’s growing popularity and media attention, a group of students has set out to form a poker club at Ithaca College, hoping to see it eventually grow into a club sport.

Professional poker first gained popularity through the World Series of Poker, which was founded in 1970 in Las Vegas as a tournament for a few players who took poker more seriously than the rest. According to the WSOP website, the event was barely known outside of Las Vegas for its first few decades. However, over the past 10 years, prize money, media coverage and the number of players have increased, causing dozens more tournaments to be added. Now, the main events are covered internationally, and the majority of winners are amateurs or online players.

Freshman Jimmy Tang said he has always had an interest in poker. It began during his upbringing in China where he played cards casually with friends and family, and it followed him to the United States when he moved to Kansas at age 16. Tang said poker continues to be part of his life at the college. When the World Series of Poker was broadcast on Nov. 11, he was thrilled to find that it was on the TV during Late Night in the Towers Dining Hall.

Though Tang has been playing poker for most of his life, he has never been a part of a formal league, only playing for fun with his friends and family. At the college, he started playing poker with his floormates and friends informally and soon decided he wanted to form a club of his own. The club has no official name or a first meeting date set yet, but while Tang is working out the formalities, he also has put some thought into how his club will be structured. As president, he said he will run the meetings based on the level of experience of his club members. He expects many will try the game out for fun and will have little to no prior experience with poker.

“I used to play poker a lot when I was still in China, mostly blackjack or three-person poker, but my favorite was Texas Hold ’em, so that’s what we’ll focus on,” Tang said. “We’ll start off talking about the game because some people will come in who don’t understand the game. It will be about teaching them and involving students who know about the game already.”

Mike Surman, a fifth-year physical therapy student and one of the club’s first members, said the game requires a great amount of study to truly be a master. Though many assume the bulk of poker success is based upon luck, Surman said Texas Hold ’em has much more depth to it than most people realize, and he hopes the club will be able to convey skills beyond the basics.

“It’s a long-term game,” Surman said. “If you know a few basics and play just for fun you’ll get a lot of fluke wins, but you’ll never beat the professionals consistently if you don’t know the skills. There’s a lot of things that people don’t realize poker even has to it: tons of math, general strategy, advanced strategy, bankroll management. It takes a lot of thinking.”

Surman said as soon as he heard about the club he knew he wanted to join, and he thinks others will have the same reaction.

“A lot of people who want to learn would do a lot better if they were introduced,” Surman said. “They see it on TV and want to learn how to play but never have the opportunity.”

Tang mentioned the idea of starting a poker club to his major advisers. One of them, his physics adviser Michael Rodgers, associate professor of physics, agreed to advise the new club. Rodgers said the club is in its infancy, but he will help it grow using his experience advising other clubs, such as Society of Physics Students Club, the Engineering Club and the National Society of Physics Students Ithaca College Chapter.

“I’ve been advising clubs for a long time, so I’m familiar with the process,” Rogers said. “It’s just about giving the right paperwork to the right people, but it can be very confusing the first time you do it.”

Rodgers helped Tang submit a club proposal form to the Office of Student Engagement and Multicultural Affairs, which required that he list any available officers for his club and 10 interested members. When he proposed his idea, Tang discovered that a poker club existed previously as an intramural sports team, but had faded out over the years. Now that his club proposal has been approved, Tang said he hopes to turn that around in a big way by continuing to post announcements on Intercom and promoting it on several social media outlets.

“I want to expand it to put it on the same level with the club sports,” Tang said. “I hope we can actually compete with other schools, too. I don’t have a big enough social media circle for that to happen yet, but eventually I really want this to be explored by other schools.”

Tang’s passion for poker is the driving force behind this club-creating venture. His end goal is a competition team, but first he wants to form a community where people can feel free to make mistakes, relate to one another and have fun.

“I don’t care how much I play or if I win or lose,” Tang said. “I just want people to come and play. I care about this sport.”