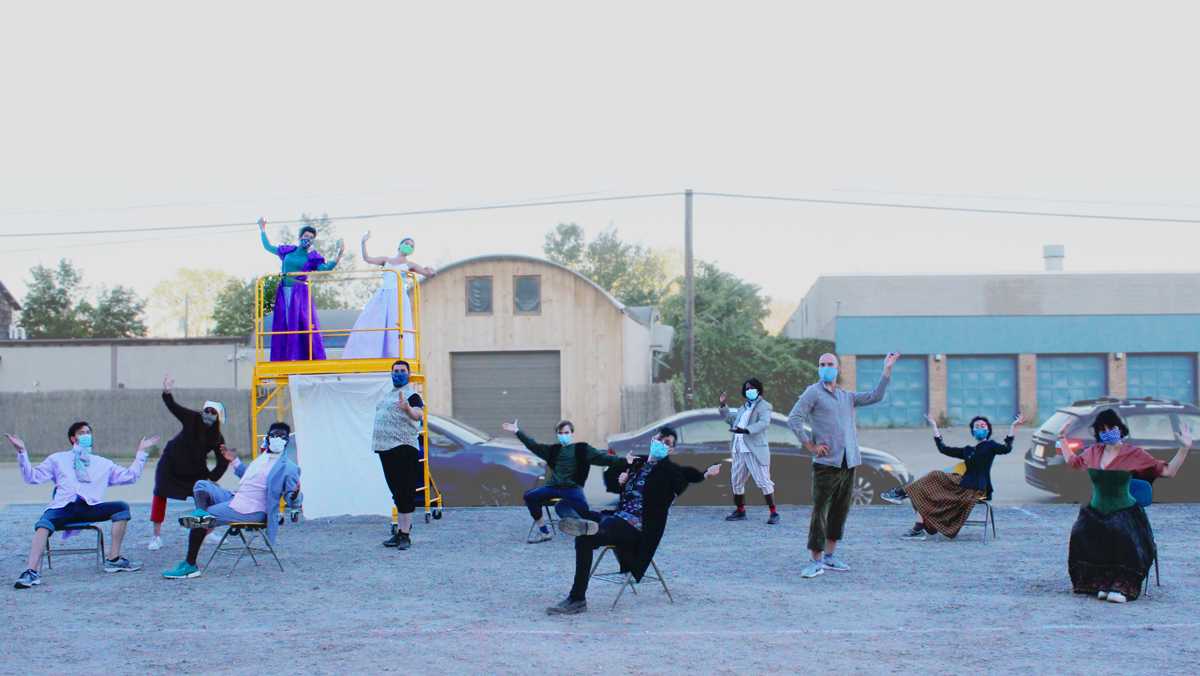 Courtesy of The Cherry Arts
The fall seasons at Ithaca College’s Department of Theatre Arts and local theaters in Ithaca will look different this year because of the coronavirus. At The Cherry Arts’ first production in September, actors will wear masks, while The Cherry’s later fall performances will be streamed live.
By Gabrielle Topping — Staff Writer
Published: September 11, 2020

The fall season at Ithaca College’s Department of Theatre Arts and local theaters in Ithaca is looking different this year. Because of the coronavirus pandemic, the college decided to hold the fall semester online, the theater department’s shows cannot take place in person. The theater department’s delays and changes in production are shared by many local theaters amid the pandemic.

Catherine Weidner, chair and professor in the Department of Theatre Arts, said the department is still trying to obtain the streaming rights and finalize the shows to create a new performance schedule for Fall 2020. Originally, there were eight productions scheduled for the 2020–21 season: “She Kills Monsters,” “Sweeney Todd: The Demon Barber of Fleet Street,” “Witch,” “Shifting Spaces,” “The Magic Flute,” “Head Over Heels,” “Stop Kiss” and “The Trojan Women.”

Wiedner said the theater department is collaborating on the virtual productions for Fall 2020 with the Roy H. Park School of Communications, but the streaming plans have not been confirmed. She said that the finalized titles and performance schedule will be announced on the Ithaca College Theatre website.

“We are shifting some things around to accommodate a lot of changes and are still in the final stages of obtaining the rights to be able to stream certain shows,” Wiedner said. “We are adding some new titles, suggested by students and faculty, and you’ll hear about it soon.”

Even though the fall season has not been confirmed, professors are beginning to prepare for the spring. Gavin Mayer, assistant professor in the Department of Theatre Arts, said he will direct the college’s spring production of “Head Over Heels,” which is currently in the planning stage. He said that he is hopeful that the production will be performed in front of a live audience, but he is remaining flexible.

“Head Over Heels” is a musical loosely based on the plot of “The Countess of Pembroke’s Arcadia.” Mayer said it challenges heteronormative expectations of love with characters who are nonbinary and LGBTQ relationships. Mayer said the audition style for “Head Over Heels” has not been confirmed yet.

“I’m excited to tell a story that deals with the many ways love can be expressed between people,” Mayer said. “My favorite part is the fun and inventive ways the script marries a story from ancient Greece with the classic pop music of The Go-Go’s.”

Christopher Zemliauskas, assistant professor in the Department of Music Performance, will direct the college’s musical production of “The Magic Flute” in the spring. He said the actors interested in auditioning for “The Magic Flute” will submit their auditions remotely with a recorded accompaniment track for auditions.

“The Magic Flute” tells the story of a Tamino, a young prince who rescues a princess named Pamina. Zemliauskas said the story is flexible in that it allows for fantastical and modern variations of its story.

“Working on Mozart with the music students is my favorite aspect,” Zemliauskas said. “There’s so much to learn and discover about being a musician and working on a Mozart score. It’s exciting to dig into the music and find the connections between the score and the drama. … Art and music have flourished in times of strife, historically, and my hope is that will continue today.”

Students from majors can audition for the theater department’s productions. There will be auditions for plays, musicals and a dance concert. For more information about how to participate in auditions, email ICStageManagers@gmail.com.

Samuel Buggeln, artistic director of The Cherry Arts, said The Cherry is incorporating masks into performances for actors and utilizing live productions with advanced forms of video streaming. The fall productions at The Cherry are “The Fan,” Sept. 17–26, and “A Day,” Nov. 13–21.

The production of “The Fan” features a socially distant cast wearing masks and acting with heightened movement to ensure that it can be seen by an in-person, socially distanced audience. Throughout the comedic performance, characters fight over a fan. The entire production will be performed to a prerecorded track consisting of dialogue, music and sound effects.

Buggeln said that each character is played by two actors. One actor creates the vocal performance while the other actor is the character’s body.

“We realized that an old-fashioned big farce would probably work best in terms of broad physicality, and it seemed like we could all use a laugh right now,” he said. “I’m so excited that this long process led us to ‘The Fan.’”

Senior acting major Joseph D’Amore is performing in his second production at The Cherry as Geltrude in “The Fan,” which is voiced by Cynthia Henderson, professor in the Department of Theatre Arts.

“One of my favorite aspects of this kind of show is the specific physicality each of the characters have,” he said. “With masks on, all the characters’ intentions must be portrayed and understood through movement and eye contact, which lends itself to the physical comedy of the play.”

Junior acting major William DeVary is playing the live embodiment of Crispino in “The Fan.” DeVary said he is excited to take part in a play that he hopes will bring entertainment to people from the Ithaca community.

“We find ourselves in an extraordinary moment, both with the COVID-19 pandemic but also in regard to worldwide protests against racial inequity,” he said. “My hope is that this production can provide people some joy and laughter during this moment.”

Senior acting major Lillian Herrick will play Timoteo and Limonato in “The Fan.” She said that she missed in-person rehearsals in a theater space and is excited to rejoin that aspect of performance.

“I’m most looking forward to just being involved in live theater again,” Herrick said. “Even though Zoom can be an interesting medium for performance, nothing really beats the energy of doing a show on a stage in front of a live audience, so it’s incredibly exciting that [The Cherry has] found a safe way for us to do that.”

The production of “A Day” is a story about four mysteriously connected characters who are guided through the obstacles of an ordinary day. The production will be presented in a live video stream and have five performances. Four actors will perform from multicamera green-screen booths in the theater, and their performances will be mixed in real time with recorded video for the stream.

Buggeln said that last season The Cherry did a livestream production of “Felt Sad, Posted a Frog” with six playwrights from around the world and 13 actors all calling in via Skype from their homes in real time.

“On [Felt Sad, Posted a Frog], we learned a lot about the possibilities of the livestream form and got very ambitious about how next time we could make it much more visually sophisticated,” he said. “In the end, the idea is that [“A Day”] looks like a cool kind of experimental TV show, not like a Zoom meeting.”

Tickets for “The Fan” and “A Day” can be purchased online at https://www.thecherry.org/the-cherry-artists-collective-2020-2021-season/.

“I would say our summer productions were successful because of the talent and true dedication of our artists in addition to support from our patrons for continuing our mission through a difficult time,” Gitlin said.

Chrissy Guest, assistant professor in the Department of Media Arts, Sciences and Studies, worked at The Hangar this summer to produce the theater’s virtual shows, as previously reported by The Ithacan. Guest said that the summer shows at the Hangar were performed and streamed live, and only the musical was edited together because of the limitations of audio over Zoom.

Other companies, like Running to Places Theatre, usually rent theater space from the Hangar during the fall, but the productions were canceled because of the pandemic.

“We hope to produce the season that was originally planned for summer 2020 live on the Hangar stage in the summer of 2021,” Gitlin said. “We also hope to have a live 2021 Lab Company for emerging theater artists.”

She said the Hangar Theatre plans to produce a virtual production and world premiere of “Dear Hope” by playwright Joy Peskin on Nov. 1, which is inspired by Peskin’s conversations with a Trump supporter. Details for the show are still being prepared, according to the Hangar’s website.

Marissa Accordino ’16, connectivity associate at Kitchen Theatre Company, said the pandemic did originally postpone the theater’s plans for the fall season. However, it is preparing for its upcoming season, “A Journey to 30: A Celebration of KTC’s Past, Present and Future,” which will showcase theatrical performances tailored to fit the pandemic.

Accordino said virtual offerings, both interactive and noninteractive, will be part of the season. She said the majority of content will be offered from January through June. A full season announcement with more details and titles will be announced Oct. 2 on its website.

“Because of the current pandemic, our staff had to think outside of the box in terms of what we could realistically offer our patrons while simultaneously maintaining a safe and healthy environment,” Accordino said. “I think KTC patrons and the Town of Ithaca will really enjoy what we have planned. The theater has been an instrumental part of our community for so long, and to have a celebration of that for our 30th season, even through virtual mediums, is going to be an incredibly rewarding experience.”

Joey Steinhagen, founder and artistic director of Running to Places Theatre Company, said that the pandemic caused the company to cancel all of its productions for the entire year. Steinhagen said that although the company’s shows are canceled for the foreseeable future, they will continue to explore their options.

“We are going to be laying low for a while just to make sure that we can survive long enough to get to the other side of this crisis,” he said. “We hope to offer some kind of additional virtual programming, but we haven’t solidified those plans yet.”

Steinhagen said that Running to Places instead switched to online programming and offered a free, eight-week program in July and August on Zoom that included acting, singing and dancing classes.

“Our goal is to bring kids together from all across the region,” Steinhagen said. “We bring them together to do theater, but, ultimately, the goal is to teach life skills, everything from working under pressure and a deadline, improvising when the unexpected happens and all the other things that go along with learning theater.”