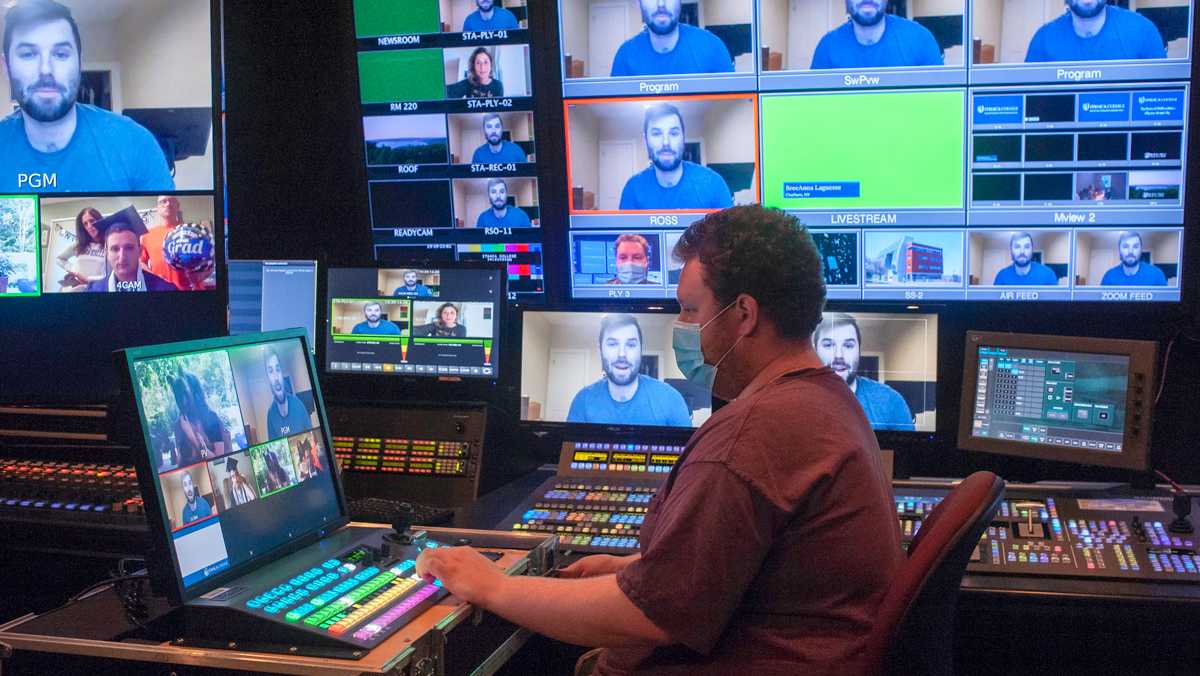 Courtesy of Rhonda Vanover
Griffin Schultz '17, technical director and graphics producer, operates the video switcher in Control Room A during one of five virtual graduations for the 2020 graduates.
By Madison Fernandez — Editor in Chief
Published: August 16, 2020

While students from the Ithaca College Class of 2020 were unable to celebrate their Commencement on South Hill, a group of faculty, staff and alumni worked together from the control rooms of Roy H. Park Hall to produce five unique virtual Commencement ceremonies.

The virtual ceremonies took place from Aug. 2 to 6. The 125th Commencement ceremony was originally scheduled for May 17 but was postponed until Aug. 2 because of the COVID-19 pandemic. President Shirley M. Collado then announced in early June that the in-person ceremony was canceled.

After this announcement, Chrissy Guest, assistant professor in the Department of Media Arts, Sciences and Studies, approached the Commencement Committee with the idea of holding a virtual ceremony that would have every graduate on screen live using Zoom. This was a novel idea — other college virtual ceremonies typically integrate slideshows and pictures of the graduates or a rolling list of names. Guest, who teaches live event production at the college, said she wanted to ensure that the ceremonies were unique by incorporating musical performances and special live guests.

“This is my expertise,” Guest said. “As a faculty member of the Park School, I felt it was really important that we look at ways to be innovative with our Commencement offering.”

Guest; Paul Galgoczy, audio visual services manager for Conference and Event Services; and Joe Menduni, audio visual services technician for Conference and Event Services, produced the events, with Guest also directing. Approximately 20 faculty, staff and alumni volunteered to help with the production, from mixing between live and pre-recorded footage to gatekeeping the Zoom to ensure the right graduates were shown, and approximately 30 additional people assisted with other aspects of the production.

“As much as virtual ceremonies are not the ideal thing for anyone, we have made a program that will celebrate our students and our graduates and the traditions of a good college, but in a 2020 way that’s innovative,” Guest said.

After the idea was approved, the team had about a month to get all of the pieces together. This included registering students, organizing the guest speakers and figuring out how to incorporate the ensembles from the School of Music, from essentially no blueprint.

“Chrissy had an idea, but I don’t think anybody had ever actually implemented the idea she had,” said Dave Prunty, co-chair of the Commencement Committee and executive director of auxiliary services. “The actual behind-the-scenes mechanics of all the pieces that had to be in place to actually facilitate the call-to-screen piece was super complicated and involved a bunch of people figuring that out, how to register people and how to have the right controls in place.”

Prunty said the committee knew the ceremonies had to take place on different days because of all of the preparation that was needed for every event. The order of the ceremonies was determined by the schools’ dates of founding, although power outages caused by Tropical Storm Isaias postponed the Roy H. Park School of Communication’s ceremony by two days. The School of Health Sciences and Human Performance’s ceremony was also impacted by the storm but could not be rescheduled because many of the people working on the Commencement worked on virtual orientation, which began later that week. Health sciences students were able to join the Park School celebration if they were impacted by the storm, said Griffin Schultz ’17, technical director and graphics producer of the Commencement ceremonies.

The next step was figuring out how the technical production of the ceremonies was going to work. Schultz added the graphics with graduates’ names and swapping between cameras. In a typical production setting, a person would sit in front of a production switcher to pick which cameras are on and when people’s names show up on the screen. However, given that the graduates were separated, the team used four different Zoom channels to get the graduates’ faces on the screen. Schultz also helped to create a spreadsheet of all of the graduates who RSVP’d to ensure that they had access to the Zoom and had to work to include graduates who did not RSVP but still wanted to take part in the Zoom on the day of the ceremony.

Some team members monitored who was allowed into the Zoom to ensure that it was just the graduates. Pinners were in charge of scanning the gallery view and using the Zoom pin feature to show the graduate full screen when it was their time to be shown. Then, Ari Kissiloff, assistant professor in the Department of Strategic Communication, who was in charge of computer graphics, followed the list Schultz compiled to put the right name on the screen.

“It’s a lot of management,” Schultz said. “One of the worst things you can do is misidentify someone. During that part, that was the most stressful part. When you work in a production landscape and you have people who are experienced, you’re still joking around. You’re still having fun. The real thing is, you’re entertaining people. You’re not doing open-heart surgery.”

Schultz said that because the team was working solely with the equipment that was already in the Park School, it was a challenge to coordinate and use two control rooms for one event.

“There was a hard, hard, zero dollar budget for this,” he said. “We had to make do with what we had, and it really was incorporating different elements from a slew of different television production resources and techniques to be able to do this.”

Some inspiration for using Zoom in this way came from the Hangar Theatre in Ithaca, where Schultz worked with Guest this summer to produce virtual shows. Schultz said that working on those shows provided him and Guest with the basic framework for working with Zoom, including figuring out how to use the program to control who is shown on screen at one time rather than the traditional gallery view. Although it took a lot of guess and check work, he said he was proudest of the fact that every graduate could be isolated on the screen to have their moment to celebrate.

“Every other school that I’ve seen do a virtual Commencement is just photos or names on screen, and that’s nothing,” he said. “You’re not really trying. You’re not putting the effort in to give these students after four years of intense work and getting a degree.”

Kissiloff said that one of the biggest challenges was the Zoom camera function, which only allows the camera to turn on if the individual selects the option to. When they logged on to the Zoom, some graduates selected the “turn camera on later” function, although the crew members needed it to be turned on earlier so they could see them in the preview. Kissiloff said that although there were some snags — as there are in every live event — the production process was enjoyable.

“Everyone acted professionally, but there was also a good amount of humor happening,” Kissiloff said. “I got to know people a bit better.”

Nigel Martin, director of technical operations, joined the college in June, coming from Howard University in Washington, D.C. This was the first large project he worked on at Ithaca College, and he said it was exciting to begin working with the rest of the Park School faculty and staff so quickly.

“I don’t think Zoom ever intended for their product to be used the way we used it on Commencement,” he said. “It was definitely a truly unique experience. It made me even more excited about my decision to come up here. Seeing this creative use of technology to solve a problem, it’s a rare occurrence and it was awesome for me to see.”

Prunty said the turnaround time to plan the ceremonies was challenging, especially while coordinating the packing and shipping of the Commencement boxes, which included diplomas, covers, the Class of 2020 medallion and personalized gifts. It took a team of approximately 20 volunteers two weeks to assemble and fill the boxes.

Normally, approximately 1,500 students walk across the stage at the May Commencement ceremony. Among the five ceremonies, there were over 1,200 attendees in Zoom, which included students, staff, faculty, guest speakers and technical staff.

“People’s expectations were hard to manage,” Prunty said. “We’ve received a lot of positive feedback. We’ve received some negative feedback, and that’s a little tough when you saw the amount of work that went into making it actually happen.”

Gabrielle Picca ’20, president of the Class of 2020, said she appreciated the format of the ceremony.

“I think overall it went really great and exceeded everyone’s expectations of a virtual ceremony,” she said. “Other colleges and universities just listed off names on a screen where the interactive part of our virtual Commencement allowed graduates to actually be engaged and involved in the ceremony.”

Anna Bornstein ’20 said that the ceremony was a memorable way to end her senior year.

“While I wish we could have all been together in person, it was special to watch the ceremony with friends and family at our sides,” Bornstein said. “My one issue is that the only topic of discussion from the numerous speakers was how our senior year was ripped away because of COVID-19. I think the entire senior class is already constantly reminded of that enough and didn’t need to be reminded once again that we didn’t get a chance to really say goodbye.”

Prunty said he is proud of the work that the volunteers put in to produce these ceremonies. While there is no replacement for an in-person ceremony, he said he thought that the virtual ceremonies were a good way for graduates to show their personalities. He said that with the changing nature of the pandemic, plans for the December Commencement ceremony are too far out to consider now.

“I think it was pretty inspiring, actually,” Prunty said. “Nobody has any of this as part of their job description at all, so it’s all volunteers coming together. … People put a ton of time and effort into this because they thought it was important. This was all faculty and staff because there’s not many students around, so it was a lot of faculty and staff just really giving up themselves to try to make the best experience possible.”