Ithacon brings its fandom traditions to the virtual universe 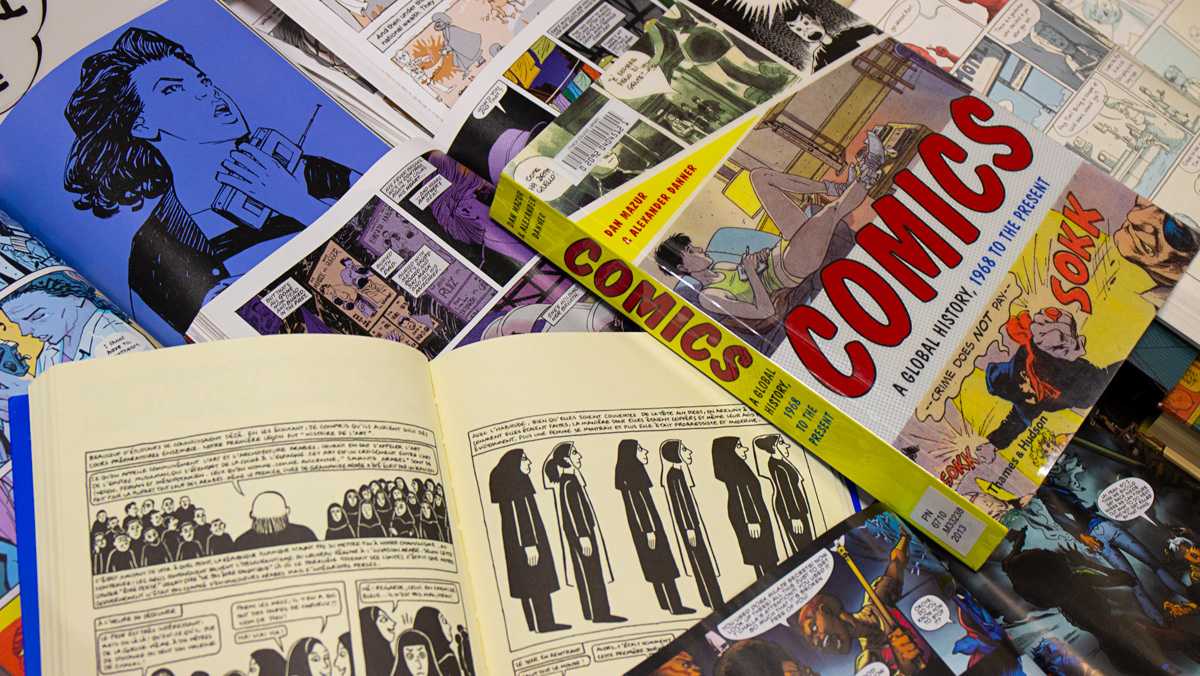 Ash Bailot/The Ithacan
From 10 a.m. to 7 p.m. April 24, Ithacon will hold its first online convention in its 45-year history. The convention will be on Zoom and will host 39 events.
By Elijah de Castro — Staff Writer
Published: April 21, 2021

This year, for the first time in its 45-year history, Ithacon, Ithaca’s comic convention, will be hosted virtually.

Hosted by the Comic Book Club of Ithaca, America’s oldest comic book club, Ithacon is a convention that is normally hosted over two days at Ithaca College’s Emerson Suites. Last year, Ithacon was canceled due to the pandemic. This year it will be hosted online from 10 a.m.–7 p.m., with extending online activities, April 24th. Over 40 events will take place throughout the one-day convention. The convention will be broken up into three Zoom rooms where attendees can attend virtual panels with workshops on illustrating and discussions about LGBTQ+ comics. Most events will be around 50 minutes long. The Virtual Dealers’ Room will feature regular Ithacon vendors giving half–hour presentations.

Attendees can also take part in gaming events, like “Batman: The Final Rogue RPG,” an hour of the popular game “Among Us” and “Kobolds Ate My Baby! RPG.” Sign–ups for gaming events are required. After the convention, two hours of virtual karaoke will happen from 10 p.m. to midnight.

While many comic book conventions have transformed into giant media events, Ithacon offers a small-scale convention experience that focuses on comic culture in the Ithaca community. The next in-person Ithacon is set to take place in April 2022.

Bill Turner, a founding member of the Comic Book Club of Ithaca, has been involved in organizing Ithacon since its inception. Turner said planning a virtual Ithacon has been a challenge. Part of the experience of Ithacon is being able to walk around, talking to new people and buying comic books. With a virtual convention, this cannot be done.

“A lot of our discussion has been around thinking to what extent we could replicate that personal experience if it was only online,” Turner said. “Of course, it’s very difficult, but we’re trying to make sure that we have a lot of sessions that are interactive and will allow audience comments during the session.”

Senior Julia Hurlburt, a member of the Graphic Novels Advisory Board, said she suspects that the experience of a Zoom Ithacon might miss the best part of what she believes made Ithacon great — roaming around the physical convention space.

“My favorite part was the ambiance,” Hurlburt said. “I’d like meeting the vendors and just kind of chilling out there. Like most things with cons, the joy in it is kind of just being able to be in the same space with a bunch of people who all like the same things that you do.”

Michael Watson 13’ is the writer of “Ithaqa” — a Lovecraftian horror comic series with its first issue available on Watson’s website for free — and was going to appear at Ithacon for the first time in 2020 before it was canceled. Now attending his first convention as a creative, Watson will finally be a panelist. Watson will appear at the 2 p.m. panel “From Silent Films to Indie Comics: Ithaca’s Contributions to Writing, Art and Culture,” alongside Diana Riesman of The Wharton Studio Museum; Stephen Frug, the creator of the photo comic “Happenstance”; and local essayist, novelist and writing teacher Leslie Daniels.

During the pandemic, Watson put on multiple livestreamed performances of the Ithaqa comic over Zoom. The characters in the comic were portrayed by different people, all livestreaming from their homes.

“I’m not sure what to expect,” Watson said. “This is such an interesting format to kind of do. To go from a panel and a room full of people and live questions to a Zoom call, … it’s obviously going to be totally different.”

Other guests will include Roger Stern, a comic book author who has written comics for Superman, Spider-Man, the Avengers and other superhero franchises since the 1970s. Additionally, Hart Seely and Tom Peyer will represent Syracuse-based comic book publisher Ahoy Comics at the convention. AfterShock Comics and BOOM! Studios will also appear.

Gabby Krogstad, an Ithaca-based photographer who runs The Dragon’s Spark, a website of photography, digital artwork and clay, will be a guest at Ithacon. Krogstad has been to three previous Ithacons. Krogstad said the variety of artists and panels that Ithacon has makes a helpful and familiar atmosphere for young artists.

“Unfortunately we have to do this amazing event online,” Krogstad said via email. “But I have to say, they are the first that I know of to do it. From everything I’ve read so far and see on their site, it’s almost like nothing is changing, it’s just going to be online; which is fantastic.”