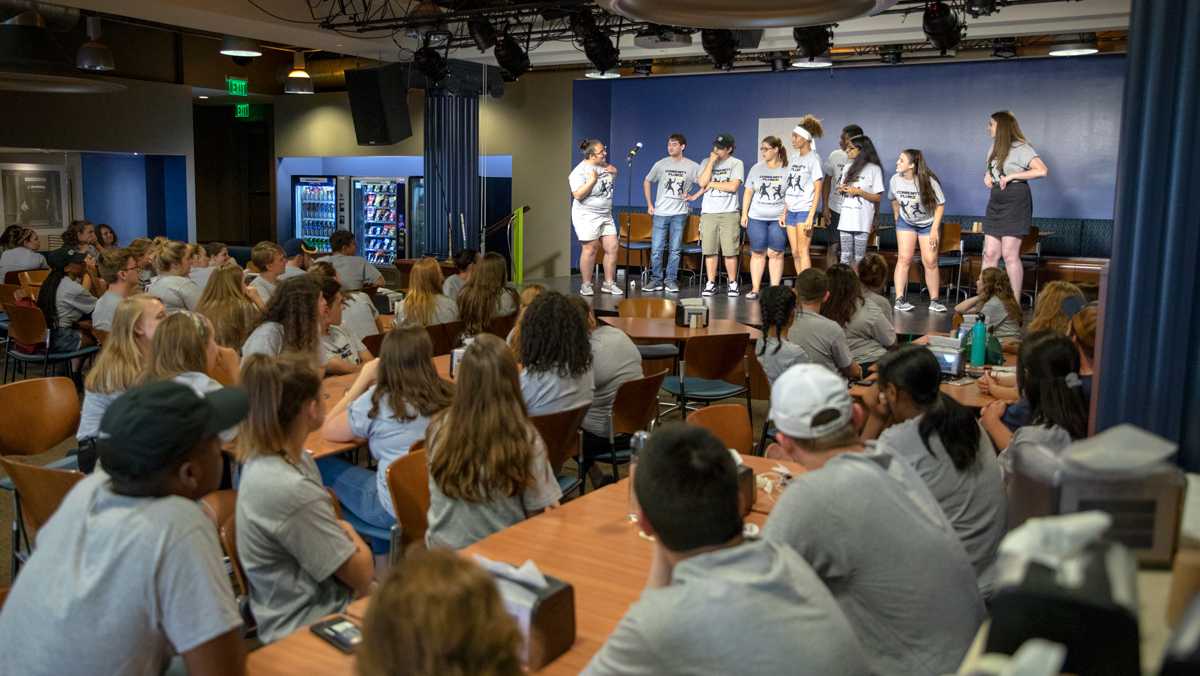 Elias Olsen/The Ithacan
Jumpstart is a program for incoming freshmen and transfer students. Students can choose from four program tracks that introduce them to the city of Ithaca.
By Jake Leary — Assistant Life and Culture Editor
Published: August 27, 2018

Across Ithaca, incoming freshmen are hiking the Finger Lakes region, swinging through ropes courses and volunteering throughout the community as part of Ithaca College’s Jumpstart program.

Students arrived Aug. 22 and participated in a series of group activities through Aug. 24. Jumpstart is designed for incoming freshmen and transfer students who apply to arrive on campus early and participate in a series of leadership and service events. Applicants can choose from Community Plunge, Experiencing Connections by Heading Outdoors (ECHO), The Green Tour or Lead-In. Don Austin, assistant director of community service in the office for Student Engagement, said 185 incoming students participated in Jumpstart this year.

Community Plunge gives students a chance to work with charitable institutions in the Ithaca community. Previously, Community Plunge participants have helped out at Big Brothers Big Sisters, the Ithaca Youth Bureau and the Ithaca ReUse Center. Lead-in students split their time among a ropes course and group activities designed to make them better leaders. The Green Tour provides students with an opportunity to take a kayak or boat tour of Cayuga Lake and features a dinner at the Ithaca Farmers Market. ECHO is also a nature-based program, giving students a chance to camp along the Finger Lakes Trail.

“They’re starting to develop friendships and closeness with other students who have common interests,” Austin said.

Some students, like sophomore Sean Herb, return to the program as student leaders — older students tasked with guiding early arrivals through scheduled activities and helping the younger students acclimate to college life. Herb participated in Lead-In as a freshman and said he decided to become a leader this year because of the friendships he made during the program.

“Some of my best friends are from Lead-In or through people I met in Lead-In,” Herb said. “While leadership is the main aspect of it, making friends and getting to know more people, in my mind, is more the focus of Jumpstart as a whole.”

Tristan Berlet, a freshman who participated in Community Plunge, saw Jumpstart as an opportunity to familiarize himself with the local community.

“I originally wanted to do the … Lead-In one but didn’t get in and ended up doing community service, which I think is going to be a lot more interesting,” Berlet said. “Because you’re also getting to meet the actual people of Ithaca and also getting to move around, see the town and see possibly what some of the cool people afterward would be.”

Jumpstart’s future is currently undecided. Starting in 2019, the college will no longer hold a midsummer orientation and will instead move orientation immediately before classes. Changing orientation will potentially make Jumpstart obsolete, Austin said. Naturally, the students who had the greatest involvement in Jumpstart, like Herb, don’t want the program to end.

“We all believe that Jumpstart potentially being closed … shouldn’t happen because it’s a great way for freshmen to know one another and make those friends that you wouldn’t make otherwise,” Herb said. “I know a lot of people wouldn’t be involved in the community or as much or involved as much as they are now if it wasn’t for Jumpstart.”