While at most theater shows the audience can expect singing, dancing or acting, one unusual theatrical element is puppetry. More specifically, one doesn’t expect puppets that contrast with the typically cheerful, singing, “Sesame Street”–style characters that people have grown up with.

The Kitchen Theatre in downtown Ithaca is hosting “Hand to God,” a show that breaks social boundaries through raunchy and hilarious puppet characters. This is the first production of “Hand to God” in the Ithaca area since the show debuted off-Broadway in 2011.

Written by Robert Askins, the story follows a pastor in Cypress, Texas, who asks a woman named Margery to lead the Church Puppet Club. Eventually, a character named Jason owns a puppet that becomes possessed and turns into Jason’s inner voice, providing a channel to his subconscious wants and deepest, darkest thoughts.

Actress Erica Steinhagen ’99, who plays Margery, has been working on this production for the past couple of months. She said the play crosses boundaries on sensitive topics, like religion while properly showing the stages of grief and despair that characters go through during difficult times. 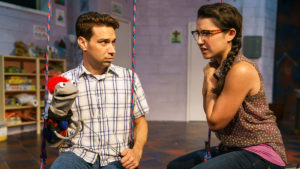 “Hand to God,” intended for mature audiences, covers topics such as compassion, grief and religion while using comical puppets. (Courtesy of Dave Burbank)

Steinhagen said the play also explores these more serious themes by mixing in raunchiness and humor. She said this makes it more accessible to older audiences, and especially to college students.

“The Kitchen Theatre put an age 16-plus on it,” Steinhagen said. “It’ll appeal very broadly to the college–age set, but I also think older people are going to get a kick out of it. It’s going to be enjoyed by a wide range of people.”

Ithaca College senior Kathryn McGeorge was invited to design the puppets for the show and has been working for the past two months on perfecting them, under the direction of Scott Hitz, the puppet director. McGeorge said she has been impressed by the messages that come across in this production.

“It uses a lot of theory and how are we able to communicate through an externalized thing,” McGeorge said. “I think the themes are repression, angst, religion and setting — and using puppets and language to keep all that lighthearted. We’re able to accept so much more with puppets than if it were humans doing it.”

McGeorge said she’s had to create tricks for the puppets, such as one that has to fall apart onstage and then come together for the next show, but this is surprisingly easier than making the tricks for puppets she’s made for previous shows.

“This is my first time being the executor for the project, and I’m lucky to have the director to help me,” McGeorge said. “It’s less-funny Muppet people. … [It’s] how can we use objects to articulate human life in a beautiful way.”

Michael Trimm ’16, who plays Timmy, said not only does he want this performance to be entertaining, but he also wants it to be reflective for the people who see it.

“The Kitchen Theatre has a mantra of ‘Important conversations happen in the kitchen,’” Trimm said. “We want people to say, ‘What can I take away from this that will make me reflect on my own life?’ I think people in college are the most important to have that conversation with.”

“Hand to God” premiered Sept. 8 and runs until Sept. 25, with tickets running at $36. However, student rush tickets are $15 because the Kitchen Theatre is encouraging college students to attend this production.


The Kitchen Theatre is located in Ithaca on 417 W. State Street.