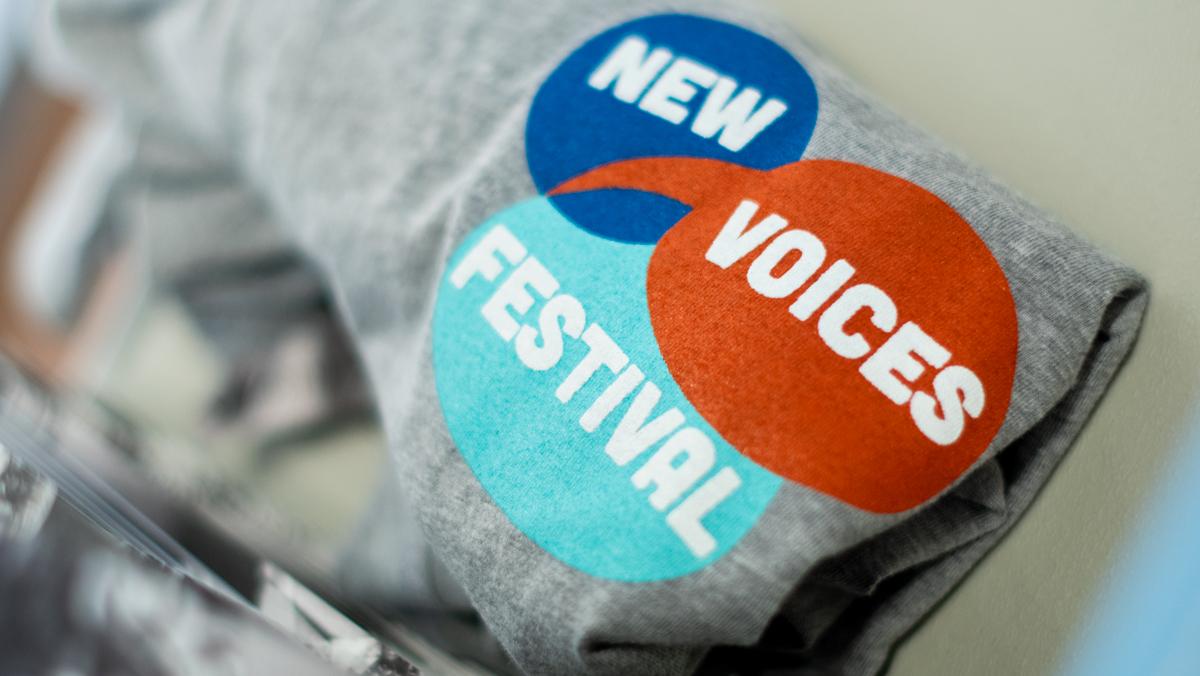 Kristen Harrison/The Ithacan
At 2019's New Voices Festival, attendees gathered in person to celebrate seven visiting writers of different genres. While student guides continued to play a role in this year's festival, the event was held virtually through Zoom.
By Arleigh Rodgers
Published: May 13, 2020

In a different year or universe, attendees of the Ithaca College New Voices Literary Festival would have hustled to the opening reception, which is usually held at Buffalo Street Books in Downtown Ithaca. But amid the global coronavirus pandemic, the events that would have taken place in the bookstore’s small setting were replaced by a Zoom link and gallery view of Ithaca College students, professors and Ithaca community members.

The video conferencing application Zoom allowed the New Voices Festival — an event that is usually in-person and occurs over three days on campus and in Ithaca — to take place virtually April 22–24. Approximately 100 participants were able to join the Zoom event from the convenience of their homes. Every year since 2013, the festival has been hosted by Eleanor Henderson, associate professor in the Department of Writing, and Chris Holmes, associate professor and chair of the Department of English.

“Even though we weren’t able to operate as many events, … they were attended by people who normally wouldn’t be able to attend,” Henderson said. “I think a lot of our students have mourned a lot of the festive campus events, and being able to participate even remotely was really enjoyable.”

Approximately seven authors who have recently published their first or second major works are invited to visit the college at the end of April for the annual New Voices Festival. This year, the festival showcased essayist Andre Perry; poets Elizabeth Lindsey Rogers and Nomi Stone; novelists Alexandra Chang, Brendan Mathews and CJ Hauser; and playwright Jonathan Spector. The authors tackle a spectrum of topics through their works, from a mumps outbreak at a private school in Spector’s play “Eureka Day” to climate change and life on Mars in Rogers’ “The Tilt Torn Away from the Seasons.”

The festival always begins with “The Short Short,” an evening in which the visiting authors read portions of their writings. Hours of panels and readings are usually scheduled for the subsequent days. But this year, New Voices hosted only two additional events after “The Short Short”: a panel called “Literature in the Time of Corona” on April 23 and a musical collage showcase from senior Kyra Skye, the festival’s music director, on April 24.

Skye provided a YouTube link to the video and instructed approximately 50 attendees over Zoom to click “play” at the same time. Skye’s video began with clips of early news coverage of the pandemic that then shifted into videos that correlated with excerpts of the writers’ works. Skye composed the background score with synth pads, MIDI keyboard and guitar.

Skye said they initially wanted to explore escapism, a theme they found in all the writers’ works, for the collage, but they were instead drawn to the pandemic and how it affected the world.

“I put together a collage focused on what it means to be in quarantine and trying to tie together the fragmented pieces of our lives and really speak to what it feels like right now — this melancholy strangeness of being isolated and missing the parts of our lives that we no longer have but still finding ways to celebrate it,” Skye said. “I wanted to lean into that and use the authors’ works to tell a new story.”

Students can apply to the semester-long, one-credit course that accompanies the festival to study one of the visiting author’s works, with two students per author. Accepted students become student guides for a chosen writer. When the authors visit at the end of April, the student guides show them around campus and spend time with them over the three days of the festival.

“There really aren’t that many festivals like this where students are so integrally involved in planning and executing the festival,” Holmes said.

Inviting writers who are in the early stages of their literary careers shows students the paths writers can take professionally, Henderson said. Gallant said she took advantage of this opportunity as a former student guide and now as the student director of the festival.

“This is a way for these authors and these students that participate not only as guides but also go to these panels, go to these readings, to see these people as fully dimensional individuals … rather than just the name embossed on the cover of a book,” Gallant said.

This year, freshman Amulya Ravitej Bachala was a student guide for Chang. Bachala read Chang’s novel “Days of Distraction” with senior Kate Sustick. “Days of Distraction” focuses on a Chinese American narrator who leaves her job as a technology journalist to move with her boyfriend, who is white, from California to upstate New York.

“Reading her work was … such a pleasure because of the way she writes,” Bachala said. “[The book] makes you feel very vulnerable … because of the issues she talks about, like race and identity. … It brought up questions I’ve been asking myself for a long time about the way we view race.”

Chang lives in Ithaca, and she said that before she was invited as a writer, she attended the festival every year since she moved in 2013.

“New Voices Festival to me has been a defining part of the literary experience in the town,” Chang said. “I think what was so special about this year’s is related to it being virtual and it being during a pandemic. … It was so heartwarming to see students who, despite having to navigate being a student during [the] COVID-19 pandemic, are still finding ways to connect with works of art.”

Editor’s Note: Sustick was previously opinion editor at The Ithacan.