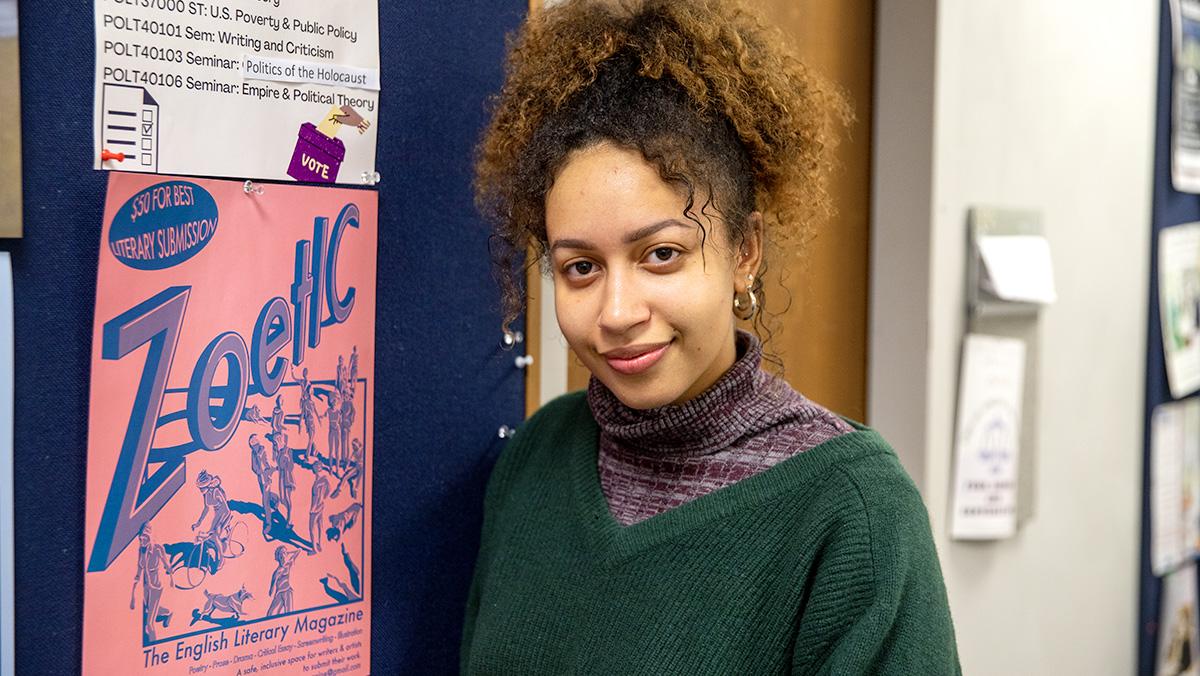 Maddy Tanzman/The Ithacan
Senior Journey Singleton, managing co-editor of ZoetIC, stands next to a flyer for the magazine. Singleton, who has served on the board for two years, is looking forward to creating new content.
By Matt Minton — Co Life and Culture Editor
Published: November 30, 2022

Many different student and local publications, like Buzzsaw Magazine and The Ithaca Times, can be found all across Ithaca College’s campus, waiting to be picked up and read. One literary magazine that has been absent from these distributions for four years is starting back up in the hopes of being included: ZoetIC.

Funded by the Sigma Tau Delta International English Honor Society in partnership with the Department of Literatures in English, ZoetIC (derived from the word “zoetic,” meaning “relating to life”) is currently accepting submissions in different fields, like poetry, prose, drama, critical essay, screenwriting and art. Submissions for their first issue of the academic year will be accepted until early March 2023 by emailing zoeticliterarymagazine@gmail.com, although the deadline may even be extended, depending on how many submissions there are. The best literary submission will be rewarded $50 and students from all majors are encouraged to submit. This is the magazine’s first new issue since 2019 and will be published at the beginning of April 2023.

“We call it a student-run publication, and it really is [that],” Adams said. “We’ve built up the editorial staff. So now you not only have copy editors, but you have section editors. … Over the course of the last nine years, I’ve done less and less of that kind of work because we’ve actually placed more of the responsibility onto the student editors.”

Senior Journey Singleton, managing co-editor of ZoetIC, said that coming out of the pandemic, it was difficult to re-establish the magazine and promote it because of the campus struggling to connect virtually and the personal effects the pandemic had on ZoetIC’s own editors that left them unable to dedicate time to the publication. As a result, there was no print magazine last year. This is Singleton’s second year on the board for ZoetIC.

“This year, hopefully we can get it back up and get it to where it needs to be,” Singleton said. “We’re also going to try to do sponsored events like spoken-word poetry, just trying to facilitate more events where people can be around writers and the literary population on our campus.”

Past issues of ZoetIC had all been published entirely in print once each academic year until 2019, Adams said. In 2019, a virtual PDF was created online along with a print edition.

“I think we’re going to continue on with that,” Adams said. “But we’re trying to do more with the digital edition. Now we’re looking at the possibility of being able to include more submissions because with a print copy, you have a real limit to what it is that you can put in there … in being more expansive, it can be more inclusive.”

While other publications on campus provide spaces for student work to be published, Adams said there is less room for academic work and essays that English students have written. One student-run publication, Stillwater Magazine, is on the more creative side, accepting fiction, poetry, nonfiction and art.

“There’s space in [Stillwater] for the academic work people are doing, but it’s primarily in the writing courses that they take,” Adams said. “And so students who are in the Literatures in English department didn’t feel like their work aligned with the vision for that magazine. We wanted to create an opportunity for academic works to be published.”

The opportunity for students to have their work published in college is extremely important, Singleton said. According to undergraduate research conducted at the University of Illinois at Urbana-Champaign, publishing as a college student can help professionalize a student’s resume and improve writing skills before they enter the professional industry.

“Even just to kind of dabble in that field I think is a good start for students,” Singleton said. “Especially if you’re interested in being an editor eventually. I think being a part of a magazine, or even submitting work to a magazine, you can kind of see the early steps of what publication looks like. It’s something that you should definitely take advantage of.”

Junior Angelina Larkin, the other managing co-editor of ZoetIC, joined the board for the first time in Fall 2022. Larkin said that while ZoetIC is a smaller and lesser-known magazine, it is not looking for one specific type of thing and wants to hear from all different voices across campus, which helps set it apart from other publications.

“We don’t really put limitations on what is submitted unless we think it might be very triggering for some people,” Larkin said. “We’re really trying to broaden the spectrum of what kind of stories are shared because I think a lot of the time, writing is a way for people to process things … [and] to get the weight off of them. So we want to be a safe space for people to do that.”

Larkin said that writing is something that means everything to her. The question of whether writing is a necessity or a luxury was posed in one of her classes.

“For me, it has definitely been a necessity,” Larkin said. “It’s helped me through a lot of hard times, to understand myself and how I think and become self-aware. Writing has been my primary tool for self discovery and processing life experiences.”