Over 70 students clambered onto raised stools, donned black smocks and said goodbye to their hair March 6. Three stylists sped through haircut after haircut as they tried to keep up with the flood of donors.

The Shoshana RudnickInch-A-Thon is an annual fundraiser run by Ithaca College Hillel, the Jewish community on campus. The event is named after Shoshana Rudnick, a major sponsor of Inch-A-Thon and Hillel. Professional hairdressers from Center Haircutters, Pesco Barber Shop, Hair It Is Salon and Karma Salon trimmed locks from 9 a.m. to 5 p.m. March 6 in the North Foyer of Phillips Hall. Students and faculty members willing to donate 8 inches of their hair were entitled to a free cut, while donors who wanted a trim were charged $10. Participants either made appointments online or stopped by for drop-in hours.

All proceeds from the event were donated to Sharsheret, a national Jewish organization that supports families struggling with breast cancer and ovarian cancer. The hair was sent to Pantene Beautiful Lengths, an organization that makes wigs for cancer patients.

The 2017 event attracted 72 donors and raised $648, which is less than last year’s total. In 2016, IC Hillel aimed to raise $500 and ultimately received $1,000. Sophomore Rachel Steinmetz, executive vice president of finance and social justice for IC Hillel, said she was unsure whether IC Hillel would be able to top last year’s donations.

“My goal would theoretically be to top last year, but that’s not going to be possible,” Steinmetz said during the event. “We’re having minor issues getting stylists to come to the event. It seems a lot of our stylists canceled at the last minute.”

Satori, a salon near the Ithaca Mall and one of Inch-A-Thon’s regular salon participants, dropped out of the 2017 event, but members of IC Hillel said they didn’t lose hope. Junior Amanda Dworkin, vice president of communications for IC Hillel, said the organization was making do with fewer stylists.

“We have more people interested in getting their haircuts than the amount we can accommodate with how many stylists we have this year,” Dworkin said. “But we’ve gotten some other salons we haven’t had in the past to come, which is good. But that is one of the issues we’ve been running into all morning. … As of [March 5], we had over 70 people already signed up [online] before the event. … So there’s a bit of a wait, but we’ve got a better flow now.”

Dworkin has been involved with Inch-A-Thon since her first year at the college and said the event has grown in scope since then.

“When I was a freshman, I was kind of just involved because I had friends that were on board,” she said. “It was a lot of fun and really rewarding because … we got a lot of donations, so it’s a really great event.” 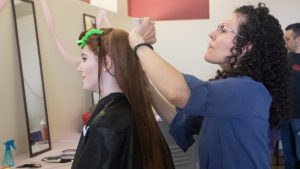 Ed Pesco, co-owner of Pesco’s Barber Shop, said the type of hair styling he was doing at the event was outside of his comfort zone. He said he typically cuts shorter hair but that he was willing to try something different for a good cause.

“I don’t usually cut hair … like 8 inches long, but I liked the idea of where the hair gets donated to,” Pesco said.

Haircuts have the potential to be economic burdens for college students — a cut at Center Haircutters costs $15. At Pesco’s Barber Shop, a standard men’s cut costs $16, and at Supercuts, a typical women’s haircut is more than $20. Steinmetz said she believes the low cost of the haircuts at the event was a key motivator of student participation.

“They’re getting a $10 haircut — what could be better than that?” Steinmetz said. “I mean, a normal haircut for a woman I feel like is about $40, so to cut that price in half — even more than half — is incredible, and it’s still a fantastic haircut.”

Sophomore Ryan Downie discovered Inch-A-Thon through the myriad posters around campus. He said he decided to drop by because he could kill two birds with one stone: He could donate to an important charity and get a haircut. Downie said events like Inch-A-Thon are simple ways to help the community.

“It’s not that difficult to go get a haircut,” Downie said. “I mean, I just had a conversation with a girl kind of debating whether she should or not and … the obvious answer is yeah.”

Pesco also said participating in fundraising events is a no-brainer.

“If you can make money for a good charity, I think that’s important,” Pesco said. “All it is for me is time. … It’s hard for me to say no.”

In a matter of seconds, several of senior Katherine Fields’ years were snipped away. She knows the cut was for a wonderful cause, and after all, it is only hair. For the many people who participate in Hillel’s annual Shoshana Rudnick Inch-a-Thon, getting a new haircut is uplifting and inspiring. Originally, the traditional hair donations…