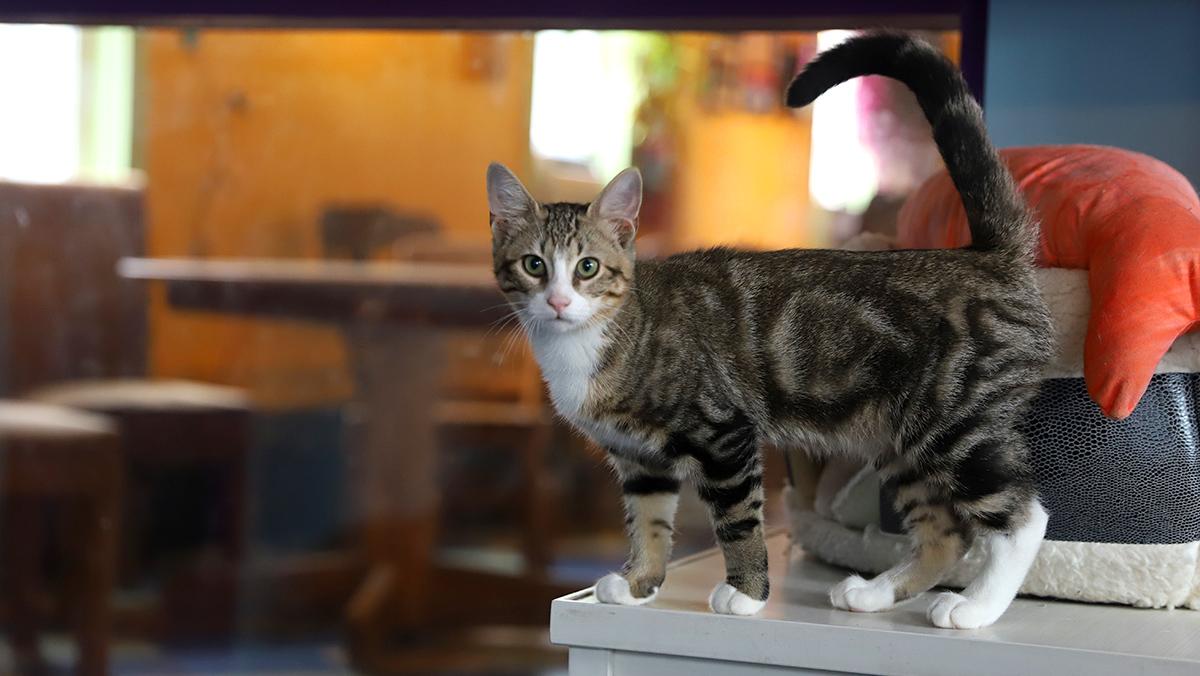 Rory Cassidy/The Ithacan
The Alley Cat Cafe, featured in the recent Netflix documentary "Inside the Mind of a Cat," is home to cats, like Emilia, drinks and food. The documentary was released Aug. 18 and focuses on cat research.
By Prakriti Panwar — Contributing Writer
Published: September 14, 2022

Alley Cat Cafe, a place that prides itself on being a shared community for coffee and cat lovers of Ithaca, was used as a shoot location and set for a recent Netflix documentary “Inside the Mind of a Cat.”

The documentary, produced by Red Rock Films, was released Aug. 18 and focused on cat research conducted by scientists across the world as well as the science behind cats’ behaviors and actions. Several action shots within the documentary were shot in the Alley Cat Cafe, located in Downtown Ithaca. It was the Red Rock Films crew that reached out to the cafe after already being in touch with Bruce Kornreich, senior extension associate director at the Cornell Feline Health Center, Kristin O’Scammon, owner of the Alley Cat Cafe, said.

“In kind of brainstorming together, [the producers] thought that, you know, that the Alley Cat Cafe would be awesome,” Kornreich said. “Because they’re just a great local entity. What they’re doing is very consistent with what we’re trying to do, which is trying to provide people with really positive experiences with cats and the benefits that cats can provide. ”

The documentary crew spent a significant amount of time in the cozy and aromatic shoot location, while Kornreich said he shot his clips in a local AirBnB because of the COVID-19 pandemic.

When the crew first came into the cafe, their emphasis was different, O’Scammon said. It was more focused on what she called the “cat and human connection,” or the emotional bond between the two. The crew was initially interested in talking to someone who had adopted a cat from the cafe — which they did get on camera, but did not use for the documentary, O’Scammon said. The documentary focused more on the science behind cats’ behaviors and cat research by the time it came out.

Ithaca College first-year student Paris Agiomavritis said she recently visited the cafe and talked with O’Scammon about the documentary.

Kornreich said he did not seem to mind the fact that the documentary took a more scientific turn. He said much of the research featured in the documentary (such as the experiment seeing whether a cat recognizes its name or not) dealt with investigating the human-animal bond, which was congruent to the idea of informing people about the relationship between cats and human beings.

“Well, I think it’s fine and very informative, because although they did get more into research, primarily behavioral research, much of the research was focused on how people interact with cats,” Kornreich said.

Regardless of the outcome, O’Scammon said she enjoyed the process. But at the same time, she would have liked it if the documentary focused more on educating people about fostering cats and taking care of them.

First-year student Samantha Guzman, who has two cats of her own, said she liked the accurate representation of cats in the documentary.

“In terms of the documentary, it’s just nice to get scenes of the cats just playing around and being their natural selves rather than getting a sad view of the cats caged in a shelter,” Guzman said. “I think that’s what we need because cats aren’t meant to be caged, they’re meant to be roaming around free. So I’m just glad that they got a good representation or view of what cats are like.”

The cats at Alley Cat Cafe are from Browncoat Cat Rescue (BCR), a volunteer-run organization that brings “adoptable kitties” to the cafe. Along with BCR, the cafe hopes to “create a sense of community; a place for people to come together with a common interest.”

The cafe has “high” and “low” energy rooms that cater to what mood one is in. The high energy room is an option for people with allergies who can watch the more social, high energy cats play from the cafe seating area. The low energy room, located at the back of the store, is better suited for those who want to cuddle with the more laidback kittens while enjoying their coffee.

“I was able to start off easy with cats in the low energy room that just like to sleep and then build myself up to the more playful ones,” Agiomavritis said. “So I definitely think as a person who hasn’t really had experience with cats, it’s well worth the hype and I would definitely go there again.”