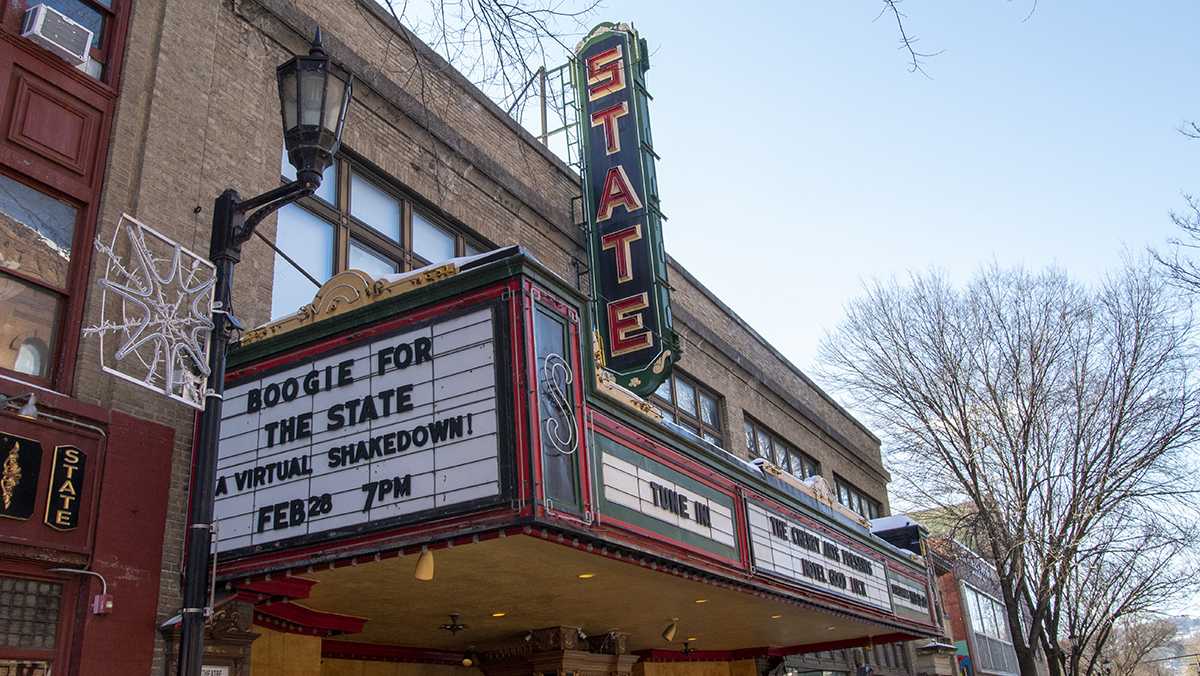 Mikayla Elwell/The Ithacan
"Boogie for the State" is the name of this year's virtual Boogie Shakedown concert and fundraiser for the State Theatre.
By Parker Schug — Staff Writer
Published: February 24, 2021

The annual Boogie Shakedown celebration is typically held during a chilly Ithaca Memorial Day weekend. However, this year, Boogie Shakedown is becoming Boogie for the State, a virtual event to celebrate local music and raise money for The State Theatre of Ithaca.

The Shakedown will take place at 7 p.m. Feb. 28 and will showcase performances from over 10 local bands. Since 1998, Boogie Shakedown has been a backyard get-together for Ithaca musicians and their families. Due to the COVID-19 pandemic, live performances have mostly been put on pause. The State Theatre has adapted to a virtual setting to maintain the tradition. The concert, which will be streamed on Facebook and YouTube, is free to watch, but donations will be encouraged throughout the event.

Viewers can expect performances from artists who have graced the Boogie Shakedown stage in the past, like Plastic Nebraska, Maddy Walsh & The Blind Spots, Sim Redmond Band, Johnny Dowd, Mary Lorson and Billy Cote of Madder Rose, Common Railers, The Small Kings, The Rungs, Janet Batch, The Sutras and Don Bazley and The Moles.

Brian Fiorello, manager of Plastic Nebraska, said it is important to keep the spirit of local music alive amid the pandemic.

“This area is big with original local music and music festivals, so [Boogie Shakedown] was kind of the first gathering of people, and you started to get that first taste of music and a little mini music festival,” Fiorello said.

Many in-person festivals in Ithaca last year were canceled or shifted to virtual programming because of the pandemic, including Ithaca Festival, Porchfest and the Finger Lakes GrassRoots Festival of Music and Dance.

Maddy Walsh, lead singer of Maddy Walsh & The Blind Spots, said that for performers, this is an opportunity to reunite — even if it is over a screen.

“I remember when we first started playing, there were a few musicians who had babies, and now there’s this whole other part of the party,” Walsh said. “There’s a bunch of kids running around, and they all know each other from having been at this party for years and years.”

The State Theatre opened in 1928 and is located in Downtown Ithaca. It is the last historic theater in Tompkins County.

Doug Levine, executive director at the State Theatre, said many live event venues are struggling amid the pandemic. Nearly 90% of independent concert venues are at risk of closing their doors due to the pandemic, according to a June report from the National Independent Venue Association.

Boogie for the State is not the theater’s first effort to keep itself afloat. In November, the theater launched the Save Your Seat campaign. Supporters had the opportunity to purchase a customized plaque to be placed on one of the theater’s seats. With 1,600 seats in the theater, the goal was to raise $160,000 to cover the deficit from not hosting a show since March 2020. The theater also held a virtual concert as part of this effort Dec. 1. The State Theatre announced that it met its goal Dec. 30.

Prior to the pandemic, students from Ithaca College would attend concerts at local music venues like the State Theatre and The Haunt, located near the Ithaca Farmers Market. However, the local music scene has changed rapidly over the previous year. The Haunt was sold last year, and the demolition of the building began the week of Feb. 22.

Junior Brooke Bernhardt attended a Walk the Moon concert at the State Theatre in 2019 and said she would be sad if the theater had to close.

“It’s a beautiful old-fashioned theater and a nice concert space,” Bernhardt said. “I’d hate to see a space like that shut down.”

In an effort to make Boogie for the State run smoothly, each performer pre-recorded their performances. All of the performances will be edited together for the livestream.

“One thing that we learned is with true live streaming, there’s a lot of risk and a lot of stress involved because so much can go wrong, but when you have people recording them in advance, you get the good take,” Levine said. “Then you can put it all together, and the way we stream it out, we kind of ensure that it’s a smooth, good stream, so there’s no buffering, there’s no hiccups.”

Walsh said she is looking forward to not only participating in the concert but also watching other performances.

“We’re happy to submit a musical contribution from ourselves, but I love tuning into the other bands, and that’s sort of the joy of this particular festival, party, is that musicians get to watch other musicians bring their stuff to the stage,” Walsh said. “To see them and hear them again will be a total joy.”