Local ‘Once Upon an Eye’ gallery open in Ithaca until Dec. 18

Kendyl Bennett and Maxine Hansford
Ithaca-based artist Alice Muhlback unveiled her exhibition “Once Upon an Eye” on Dec. 3 in the Eye Gallery, located at 126 East State St. Muhlback’s work combines minimalist characters with pastel and neutral tones. The gallery will be open to the public for free until Dec. 18.
By Silas White — Staff Writer
Published: December 7, 2016

A tree with miniature plastic viewfinders dangling off it sits in one corner of the room. Upon looking through the tiny glass opening of one of the viewers, one can see paintings of giants, crows, cats and a wandering eye. This is just one of the attractions in the “Once Upon an Eye” exhibit, which is running from now until Dec. 18 at the Eye Gallery, located at 126 East State St.

The exhibit is named after an animated short film of the same name, which features original work by local artist Alice Muhlback. The film has yet to be shown to the public, but the exhibit features sculptures and paintings inspired by characters who appear in the short. The entire film will be released this summer by Little Whale Productions, an independent film company in Ithaca.

The film and the exhibit are the result of a collaboration between Muhlback and local film producer Pamela Tan after Tan had emailed Muhlback about creating a movie together. From there, the two started an Indiegogo campaign that funded the film and exhibit.

The art in the exhibit is minimalist; some pieces are without color and drawn with few shapes and lines. Certain features on some of the drawings tend to be exaggerated, such as the giant’s extra–large hands.

In most of the paintings, however, Muhlback uses wide paint strokes in pastel and neutral colors while emphasizing characters through thick black lines.

In addition to the tree sculpture, the gallery features numerous works of the same group of characters. All the images in the gallery are available for purchase.

A self-taught artist, Muhlback said that as a child, she had been interested in art, such as Disney magazines. As she grew older, Muhlback found work as a cartoonist, illustrator and graphic designer, but did not start painting until she had a prophetic dream.

“One day I had … this amazing dream that I became a painter and everyone loved my art,” Muhlback said. 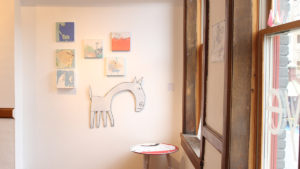 She has since become an artist who has been compared to a modern–day Picasso by Ithaca.com and whose work can be found at Manndible Cafe and Fork and Gavel Cafe at Cornell University and at Ithacamade in the DeWitt Mall. In 2006, Muhlback was named the Ithaca Festival Artist.

After Tan reached out to Muhlback about creating an animated film, Muhlback said, she jumped at the opportunity. She said she had never made an animated film before and was excited by the idea of it.

“What was important to me is we go into this together,” Muhlback said. “Our story wouldn’t have happened without us interacting and hanging out and creating. The story came from a lot of brainstorming and a lot of laughing.”

At one point in the development process, they said they were thinking of using stop–motion animation, but Tan said it posed too many challenges.

“Eventually, we decided on Alice doing actual drawings that were scanned in using Adobe After Effects,” Tan said.

Muhlback said one of the challenges was syncing the animation to go well with the music in the film.

“The majority of films are made where the musician watches the film and then adds the music, but we were animating and filming to the music,” Muhlback said. “The music is actually an emotional character.”

All music for the film was composed by Joshua Handal, a friend of Muhlback’s.

Muhlback said she already knew that Julie Simmons-Lynch, director of the Eye Gallery, was looking for an interactive installation show. Muhlback and Tan decided it was fate, especially considering the name of the animated short.

“We were thinking, ‘Wouldn’t it be fun if some of the characters escaped from the movie?’” Tan said. “This idea that the characters are running around Ithaca … is something you see here.”

“I see her everywhere, and I see her as kind of iconic of Ithaca,” Michael said. “I have little pieces of her art. I think there is a lot in her art I respond to. … It’s sort of spiritual but whimsical at the same time.”