Stoically and with impassioned, rhythmic speech, Gillian Wenzel recites the opening lines to her poem, “An Afternoon at a Maximum Security Juvenile Detention Center.”

Her stance seems unshakeable: shoulders pulled slightly back, feet planted, head held high. As she speaks, her body compounds the strength of her words, hands moving with purpose, eyes glancing deliberately from page to horizon and back. All the while, her voice unwaveringly announces the conviction of her innermost thoughts.

Wenzel’s performance showcases the art form known as spoken-word poetry, which brings the words of a poem to life through public performance. This artistic form of expression demonstrates the poet’s performance capabilities, sense of rhythm and his or her connection to the audience.

These performances of spoken-word poetry can be found on Ithaca College’s campus, notably though Spit That, the only spoken word student organization at the college. Senior Malika Giddens, president of Spit That, said spoken-word poetry is an avenue for people to express themselves in new and unexpected ways.

Oftentimes, before becoming immersed in the spoken-word art form, performers such as those found in Spit That begin with page poetry. Sophomore and Spit That member Paola Ayala said she wrote poetry in high school but did not begin performing it in a public space until she began college and was exposed to the environment of Spit That through one of its spring showcases.

“I had mutual friends who took me to Spit That,” she said. “And there I really feel like I flourished a little more because I was able to write, and it was a comfortable space with people that I didn’t even know but felt OK with.”

Wenzel shared a similar experience and said she began involving herself in spoken-word poetry last semester with the influence of Spit That.

“More acoustic and narrative styles of poetry kind of just started naturally happening simply because I was in the group of Spit That, which is really incredibly nurturing of the spirit and the soul,” she said. “The way I feel about Spit That is probably the same way some people feel about church.” 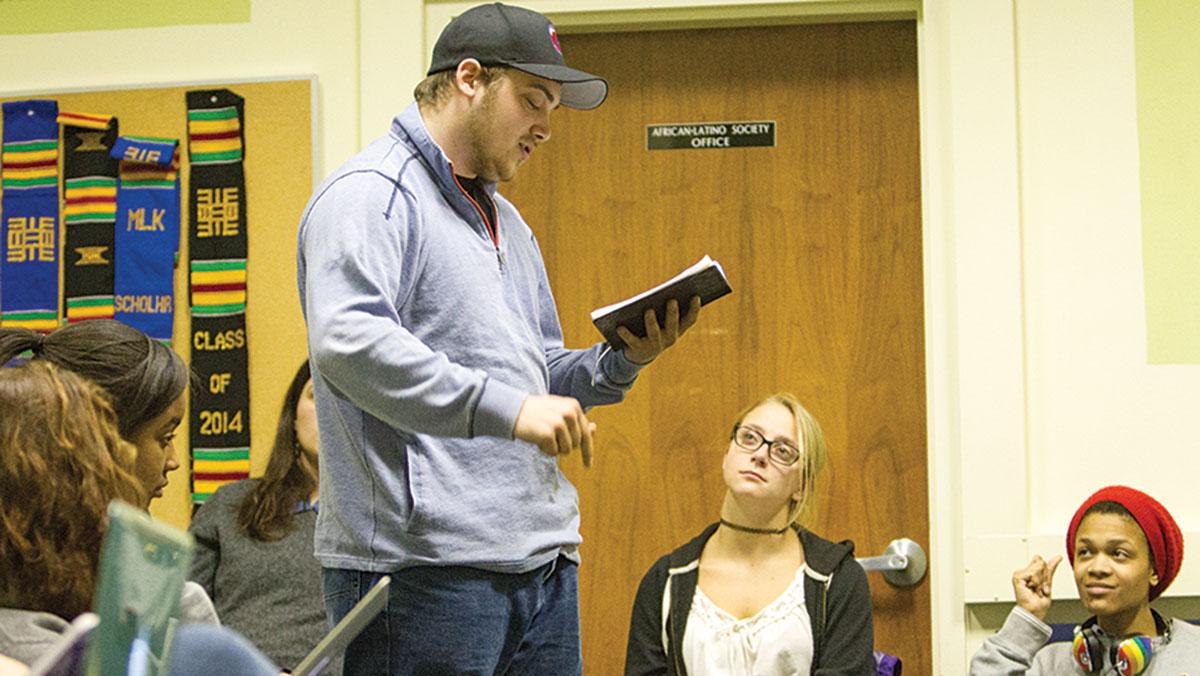 Sophomore Daniel Levine performs April 7 during a meeting of Spit That in the ALS Room in West Tower. CLARA O’CONNOR/THE ITHACAN

Spoken word falls under the larger umbrella of oral storytelling, an art form that has its own place in the larger Ithaca Community. This is reflected in Trampoline, a monthly competitive storytelling event hosted by Buffalo Street Books. Bob Proehl, host of this audience-interactive event, said participants are given five minutes to tell a story without notes. The presentational dynamic of the event, he said, allows these stories to be heard from a variety of different perspectives.

“It really stresses that anyone in the audience can participate at any time, and it’s a fascinating act of sharing to see people get up there and perform,” he said. “There’s a real strength in that, and it’s really amazing to see people realize that about themselves and their own experiences.”

Being part of Trampoline since its start three years ago, Proehl said audience members are driven by different motivations to share their stories.

“Like some people it’s very performative or it’s very confessional or it’s very cathartic,” he said. “We’ve seen a lot of people with a lot of different stuff coming up for very different reasons. So it varies a lot from person to person, and I think that makes it a really diverse event in a way as far as the content of the performances.”

For artists such as Wenzel and Ayala, poetry is often utilized as a means of catharsis and emotional release, and while spoken word places performers in a state of vulnerability, Ayala said the fear dissipates as she performs.

“When it comes to, I guess, sharing that kind of emotional part of myself, I feel very vulnerable when I’m onstage, especially when I know that I’m going to perform this piece that most of the time has some sort of relevance to me and to my life and to the people that I care about,” she said. “But I guess when I get up there I’m afraid, but as I’m performing it the fear just kind of leaves me as I’m going through stanzas, as I’m going through lines. And by the end of it I just kind of can breathe.”

With spoken-word poetry placing an emphasis on the aspect of public performance, the first experience with the craft can become a defining moment for artists who may feel timid in sharing their personal works with others. Ayala said her defining moment unfolded last semester when she chose to share a deeply personal poem about somebody she cared about.

An avid member of Spit That for the past four years, Giddens has seen firsthand how passionate and invested students are for the spoken word and can attest to the ways in which this intimate sharing of personal stories have provided a cathartic experience for the performers.