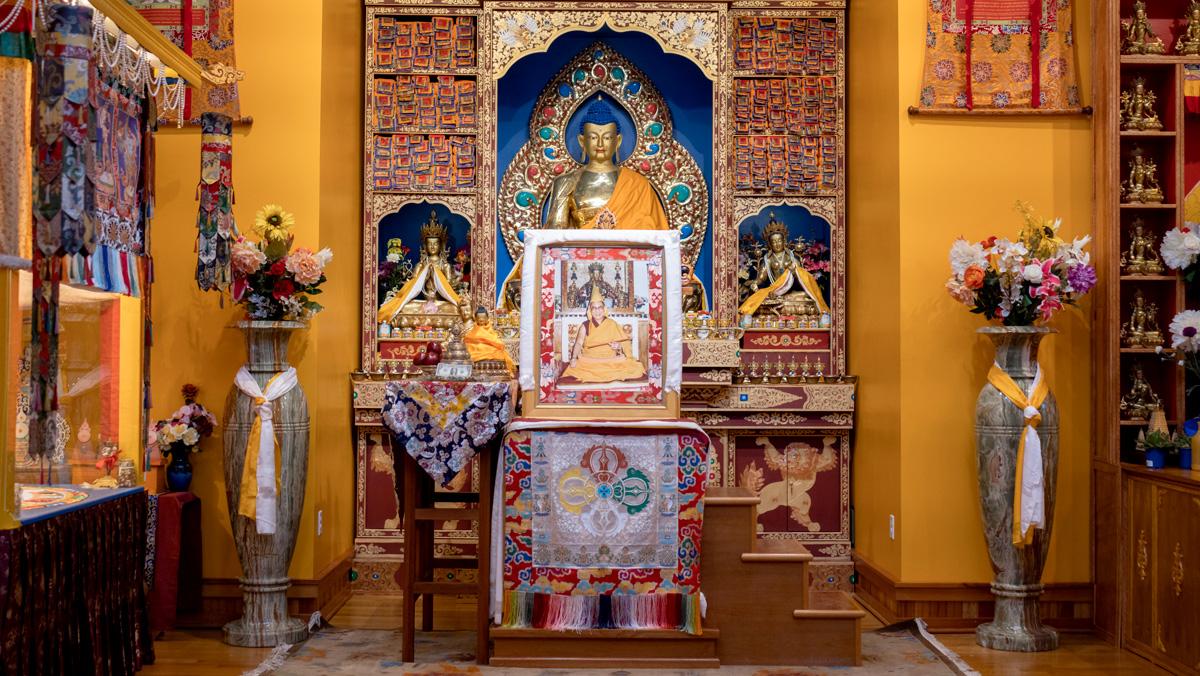 Reed Freeman/The Ithacan
The Nyamgyal Monastery Institute of Buddhist Studies is a Tibetan monastery located approximately one mile from Ithaca College. It is the North American seat of the personal monastery of the Dalai Lama.
By Connor Ahern
Published: February 25, 2020

In the Namgyal Monastery Institute of Buddhist Studies, approximately a mile from Ithaca College, Tibetan chanting echoes in a warmly lit chamber. A brass statue of the Buddha sits atop the main shrine at the back of the room, watching over Tibetan monks and Ithaca visitors meditating.

Meditation can help to reduce anxiety and stress, along with other minor health benefits, according to the National Center for Complementary and Integrative Health. College students are especially susceptible to stress, according to The American Institute of Stress. Ithaca local Lisa Bertuzzi, who has been practicing meditation at the monastery, said she believes meditations can help with mental health.

“There is so much anxiety and depression and confusion in the world,” Bertuzzi said. “Now it is pretty extreme, so it’s nice to have this peace to practice. You don’t know what [the monks] are saying in Tibetan, but you feel wonderful meditating with everyone.”

The monks teach classes on philosophy, Buddhism, Tibetan language and meditation through shorter classes and semester-long courses, which are advertised online and in the monastery itself. Ithaca College junior Anton Popov has been studying with the monks for over a year. Popov is an anthropology major at the college who takes classes on religion and philosophy at the monastery every week. He said he hopes the college and the monastery can build a stronger bond.

“I will say that I do hope that IC and Namgyal Monastery build stronger ties, especially with the philosophy and religion department,” Popov said.

Popov visited the Namgyal Monastery in India while studying abroad in 2019. Now, he takes a class on Lamrim, a Buddhist philosophical system that includes four major sections that detail the paths that lead to enlightenment. The monastery’s resident geshe, a monk with a degree in Tibetan Buddhism, teaches the text. The monks teach from the perspective of Gelug tradition, which is the newest school of thought in Tibetan Buddhism.

“The Gelug tradition [emphasizes] intense study and debate to develop the correct philosophical view before engaging in intensive meditation,” Popov said. “I consider it to be the most gradual path to enlightenment compared to the other schools.”

Among those who organize the classes at the monastery is the administrator Ngawang Dhondup. Dhondup said he believes simple answers about Buddhism and the monastery can be found by asking about the faith and the monastery, but true understanding comes from attending meditation and classes.

“Come to meditation to learn about us,” Dhondup said. “You do not ask about the monastery. You experience it.”

Dhondup is originally from Tibet. He studied in India and has worked at the monastery since 2007. Dhondup said that to understand Buddhist ways and the philosophy of the monastery, one should work to become more selfless.

“You must wake up in the morning thinking about other people,” Dhondup said.

Freshman Tenzin Dongtoe is part of a new generation of Tibetan Americans whose families immigrated to Ithaca and has lived in Ithaca his whole life. Dongtoe said the monastery has long been an ally to Tibetan refugees, who in the mid-20th century were given refugee status in the United States. He also said the monastery partners with the nonprofit organization Tibetan Association of Ithaca.

“Me, personally, and the rest of the new generation of Tibetans in Ithaca are very close to the monks of Namgyal Monastery that reside in Ithaca,” Dongtoe said. “We used to go to Sunday school to learn how to read and write in Tibetan until we reached high school. [This] created a bond between us and the monks.”

This connection is preserved by the monastery’s summer retreats and yearly activities, Dongtoe said. Every summer in Ithaca, the monastery hosts a retreat called Kalachakra. The Dalai Lama’s personal monks from India visit for the summer and recite mantras. Dongtoe said that the summer retreat allows participants to form personal relationships with the monks from India.

“We show [the monks] around Ithaca since they’ve never been here before, and we get to connect with the monks,” Dongtoe said. “We also play games like soccer and volleyball with them and go swimming.”

At the end of the Kalachakra, the monks from both Ithaca and India create a sand mandala and help to put together a fire puja. Sand mandalas are intricately designed symbols made of colored sand, crafted and hand-poured by the monks. Per Tibetan Buddhist tradition, the monks create and destroy the mandalas as a way to spread a blessing over the world. A fire puja is a ritual in which a series of offerings are burned to bless the environment and create hope for world peace.

“Ithaca is known for being very nice toward immigrants,” Dongtoe said. “Ithaca is a small town, so most communities in Ithaca know about the Tibetan community and support our beliefs.”

Center dives into the history of Tompkins County