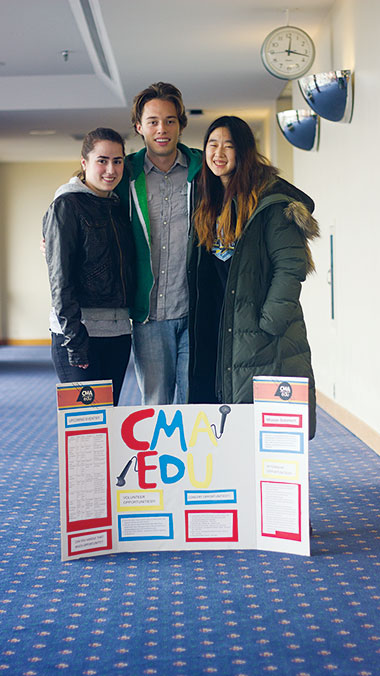 Country music is known for its roots in the South, but its fanbase can be found around the world. Although New York may seem a bit too far north, many fans have made their way to campus and have shown their appreciation in the form of a new club from the Country Music Association called CMA EDU.

Seniors Christie Bonacci and Taylor Tarantello started the club last semester when they saw there wasn’t a program at Ithaca College centered around teaching students about the industry, despite Ithaca’s strong music community. Both are currently studying in Los Angeles but are still active members on the board as president and vice president of communications, respectively. Bonacci said she sensed a strong interest in the music industry on campus, which fueled her decision to get the club started.

“Ithaca has a huge music community,” Bonacci said. “It has a ton of music programs, but there weren’t any programs structured around the business of music. I thought that the students might want to know about the business of the industry.”

While the club was founded last semester, it is but one of many chapters across the nation. In order to start a chapter at a college or university, an application needs to be submitted to the CMA EDU organization in addition to the college’s club approval process. Bonacci said each chapter coordinates with its supervisor and each chapter has a specific set of guidelines that they need to follow. She also said they need to be in constant contact with their assigned adviser.

In addition to holding monthly meetings, CMA EDU has hosted events this year that aimed to inform members about the business side of the industry. On March 26, Dan Smalls, a local talent buyer for State Theatre in Ithaca, visited the college to talk about his experiences and to hold a Q&A with the members. Sophomore Jamie Shum was one of the members who attended the event and said she learned much from this first networking event.

“I learned about a lot of things having to do with being in the music industry and how to handle issues and concert promotions,” Shum said. “He also gave us advice and shared his experiences with being a concert promoter and music business entrepreneur.”

Bonacci said she hopes to hold one more networking event in April with another person in the music business. She said she would prefer having a manager or agent speak to the club because they usually have much more to say.

“It’s all about networking and making connections,” Bonacci said. “We want to have music industry professionals come in and talk to them. We want them to make those connections and give advice about what they wish they had known when they were college students.”

In addition to working with outside resources, members are also planning to collaborate with on-campus groups in order to raise awareness of their club. Shum said they want to promote themselves at the next student organization fair and by working with IC After Dark for its Urban Cowboy event, a Western-themed program.

Stefanie Tanaka, vice president of membership, said this first year has been a bit slow with five or six students consistently showing up to meetings. Tanaka said the executive board has been working hard this semester to get more people involved for the coming semester. Tanaka said one of the ways CMA EDU plans to expand in the near future is by working with the existing alternative music scene in Ithaca.

“We’re really trying to work with the alternative music scene in Ithaca,” Tanaka said. “We’re going to try to bring bands like The Gunpoets and we brought in Dan Smalls who works in the [local] music industry. I think that that’s the most important: giving them that experience. It’s beneficial no matter what genre it is.”

When it comes to what CMA EDU has planned for the future, Bonacci said she is positive it will take off due to how active Ithaca’s music scene is. She hopes that once the club has properly established itself, more professionals will want to speak to the members.

Tanaka shared Bonacci’s sentiments and said CMA EDU has potential. She also said she’s looking forward to how far the club will go in the near future.

“At first I thought it would be hard to get it off the ground and to get students interested, but it seems to be spreading on campus,” Tanaka said. “We’re getting our point across — that we want to teach people about the music industry and the music business.”