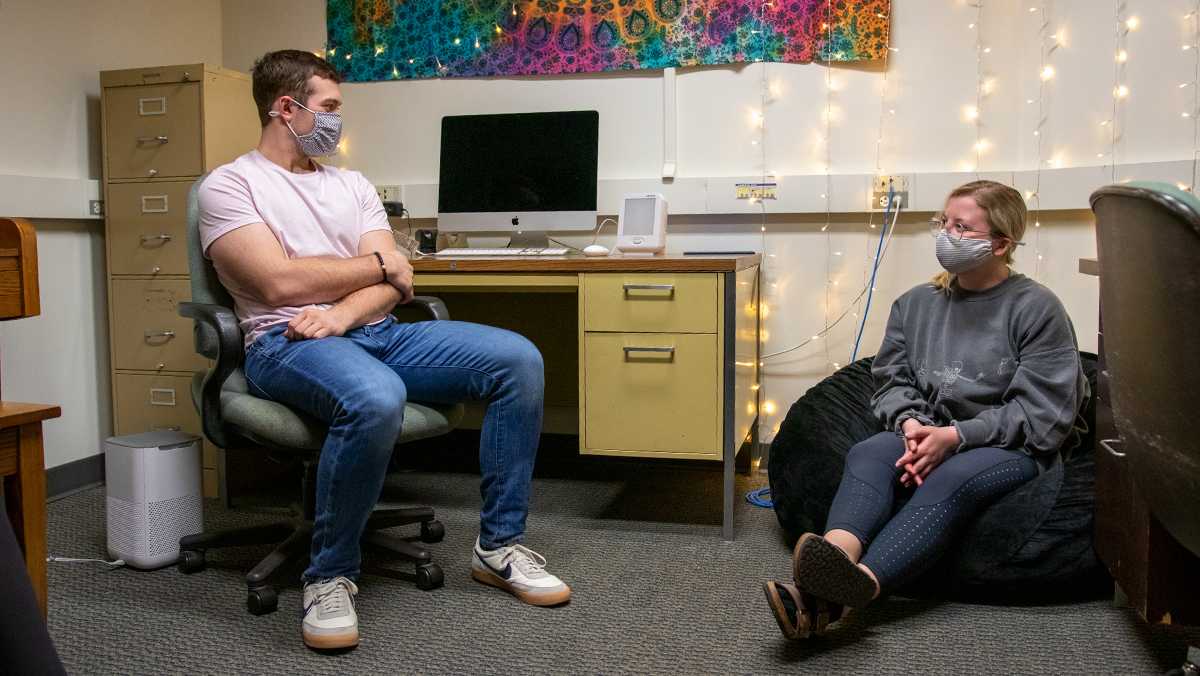 Mikayla Elwell/The Ithacan
From left, sophomore Tim Coene and junior Erin Smith use one of the new mental health rooms they helped to create in the James J. Whalen Center for Music.
By Grace Azaula — Staff Writer
Published: April 7, 2021

Ithaca College’s Mental Health Awareness for Musicians Association (MHAMA) created six of these wellness rooms this semester. The spaces are set up in old faculty offices throughout the School of Music and can be signed out by all music students through a form on 25Live.

Junior Caitlin Dansereau, president of ICMHAMA, said the organization first thought of creating wellness spaces last year, but the idea had to be put on hold due to the pandemic.

Junior Caitlin Glastonbury, treasurer of ICMHAMA, said the idea was sparked when they went with junior Gavin Tremblay, an officer of MHAMA, to the rooms set up in the Hammond Health Center that are designated for stress relief.

Glastonbury said they enjoyed the spaces but felt that it was inaccessible to students in the School of Music.

“We had to dedicate a lot of time out of our day, which we didn’t necessarily have, to engage with this resource,” Glastonbury said. “And that then brought up the conversation that I think a lot of Whalen students have, which is that we don’t often leave that building. During the day, students tend to get there in the morning and be booked with classes and study time and practicing until the evening, and so it’s often hard to separate that work into a safe space where you can relax and unwind. And so we wanted to create that in the building.”

Freshman Emma Commisso, a music education major, said she took a test in the wellness space and found that it was a much more relaxing place to spend time than the practice rooms.

“You can hear everyone from other practice rooms,” Commisso said. “You’re here for the first time with other people, and you’re like, ‘Oh my gosh, am I good enough?’ and you’re just so in your head. And so then to be in a space that says, ‘Hey, you’re allowed to relax,’ and you’re allowed to just go at your own pace, whatever that might be, if it’s faster or slower than others. It’s just a nice reminder to take care of ourselves.”

Smith said that shortly after the meeting, MHAMA met with Dow to discuss mental health issues further and to propose the wellness spaces.

Dow said he has been working as a consultant for the School of Music for 8–9 years.

“Even though they know that they’re here in school to learn, there’s still a part of them that feels like they should be perfect,” Dow said. “So that feeling of being able to share that they’re struggling with anxiety or depression, with a professor or with other students, it’s just really hard because they don’t want anyone to feel like they can’t do their part or be a part of the ensemble.”

Dow said that after this meeting he told Interim Dean Keith Kaiser and Interim Associate Dean Ivy Walz about the wellness spaces idea.

Smith said the deans reached out to MHAMA this semester and agreed to fund the project.

Tremblay said the administration’s support of the wellness spaces was generous and is a good start, but that it does not resolve how students’ mental health is impacted by Whalen’s high-pressure culture.

“This is not a small-level, insignificant change,” Tremblay said. “This is a huge cultural phenomenon, … this idea that, because we’re such a prestigious music school, it has to be like lava and you’re a diamond. And if you can stand the pressure, then you’ll harden into something amazing and beautiful and artful. And I’ll be totally honest, I think that’s total BS. I think that is a cop-out philosophy and it teaches people that their mental health is not something that should be taken care of.”

“I think that this letter was an important step because often when issues occur, college administration will pretend to fix or address the problem without really solving anything,” Smith said. “Change happens so slowly in universities in general, but we needed solutions as soon as possible because students were really suffering.”

Smith said that after publishing the letter, she heard that some faculty members altered their courses, but said she still is unsure if any concrete changes were made. This semester, Smith said the mental health subgroup of the Whalen Student Council presented at a faculty meeting about mental health and students’ needs.

In addition to the wellness spaces, MHAMA has been hosting virtual events this semester, including mindfulness activities, paint and sips and a community cleanup on the commons.

Dansereau said that in future MHAMA events and initiatives, she hopes to continue advocating for mental health, particularly in areas that are not frequently addressed.

“I think we’re just continuing with finding topics that aren’t necessarily talked about, or that we want to talk about but other people are kind of shying away from,” Dansereau said. “But we want to be bold and confident about that and be like, ‘We need to talk about this because this has some issues right now.’ Let’s bring some awareness to it, let’s start that conversation.”