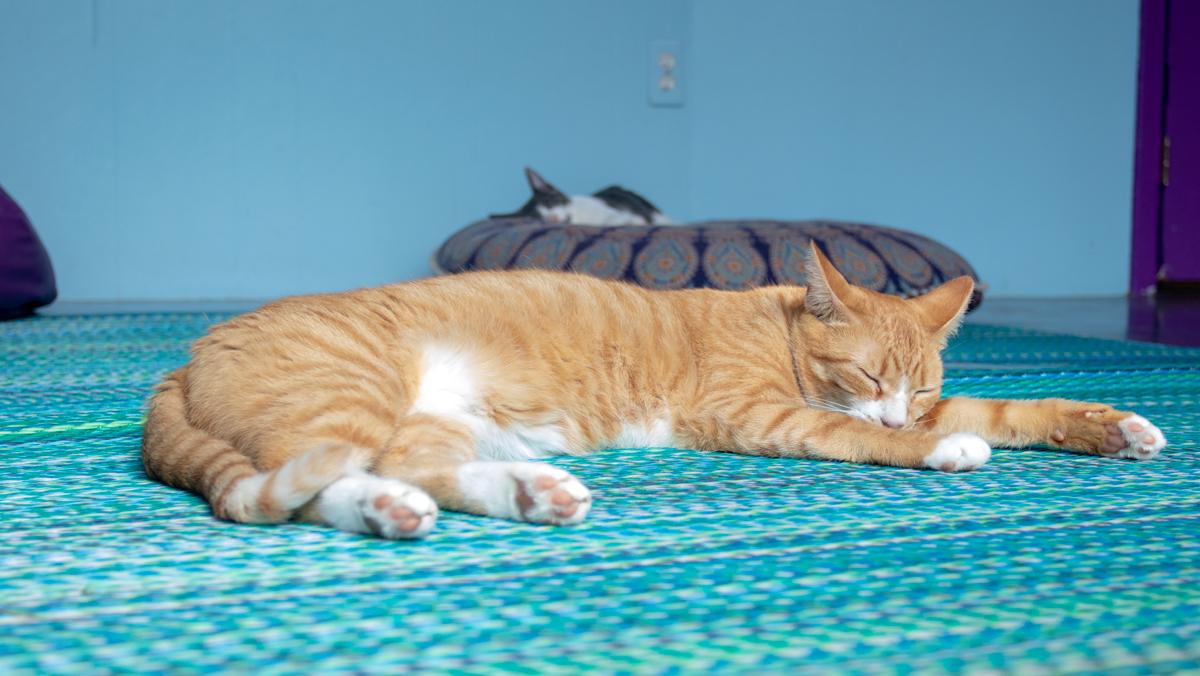 Elias Olsen/The Ithacan
Marigold sleeps on the rug at Alley Cat Cafe, Ithaca's first cat cafe. Customers can purchase coffee, tea and baked goods in the front room and cuddle with cats in the back room.
By Kara Bowen — Life and Culture Editor
Published: August 29, 2018

In the back room of Alley Cat Cafe, a group of college-aged women sits cross-legged on a rug. Two of them hold rainbow-patterned wand toys. A bright orange cat, Marigold, walks around the circle, rubbing against the women’s legs.

“Does this entice you?” one of the women asks, laughing, as Marigold sniffs the toy. Across the room, a black kitten, Moira, balances on a windowsill on her hind legs, trying to reach a feather wand that a couple is holding just out of her reach. Next to them, a teenager holds her phone up to another kitten, showing her to a friend via FaceTime.

Alley Cat Cafe is the only place in Ithaca where customers can sip a hot cup of coffee while surrounded by cats. The front half of the café has tables, chairs and a long counter where “purristas” prepare coffee, tea, sandwiches and other baked goods typical of a café. Against the back wall, however, two double doors lead to a square, purple room lined with toys, rugs, a bench and shelves, which is where the cats hang out. And the cats aren’t just for entertaining guests — they can be adopted too.

The owner, Kristin, has been involved with cat rescues for 18 years before opening the café. She did not disclose her full name because she said she has received threats from people after taking cats from unsafe or abusive homes. 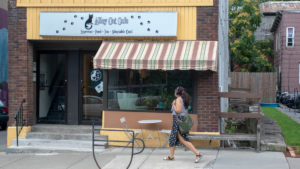 Cat cafés are a recent phenomenon. After the first opened in Taiwan in 1998, the concept soon spread to Japan. The first American cat café opened in California in 2014, and there are now over 90 cat cafés currently operating in the United States.

“It gets them out into the world a little better,” Kristin said.

All cats are available for adoption except the “café cat,” Marigold, because she has a heart murmur. Kristin said 12 cats have been adopted in the two months since Alley Cat Cafe has opened.

Whenever a cat is adopted, new cats are brought in from foster homes to the café to fill the space. These introductions only occur on Tuesday evenings. The cat room is closed on Wednesdays while the café remains open, giving new cats the day to adjust to the space without having to interact with humans. Once introduced, the cats stay in the building until they are adopted. Kristin said if a cat does not acclimate to the others in the room, it is brought back to its foster home and replaced with another cat. The room can fit up to 10 kittens but only three to five adult cats.

One of the challenges in opening a cat café is the federal guidelines put in place to maintain sanitary conditions. In the United States, cat living areas and food service areas must be separated. Kristin said she had to renovate the space to follow codes from the health department. Alley Cat Cafe uses a double door system to prevent runaway cats, includes a hand sanitizing station and has a back entrance where litter can be taken out.

Customer Sarah Carpenter stroked Moira’s head as the kitten nestled in a shelf against the wall, eyes half closed. She said she had never been to a cat café before, though she had heard of the trend. She said that although she was a dog person, the café might change her mind.

The cats are most active earlier in the day. During peak hours, the cat room is crowded with people, mostly children, kneeling on the floor and waving toys around to entertain the cats. 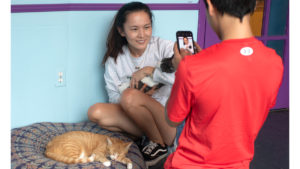 Lucy Xie holds the kitten Mel in her arms during cat nap time. The cats sleep from 2:30-3:30 p.m. every day. (Elias Olsen/The Ithacan)

“He’s licking my shoe!” a girl shrieks, as one of the cats, Mel, sneaks up behind her and sniffs the bottom of her sneaker. The room let out a collective “aw.”

Against the window in the front half of the café, away from the sound of tinkling bell toys, Sierra Cook sits with her laptop open in front of her. Cook said she usually stays out of the cat room, but the café has become her favorite place to be when she has free time.

“The things I look for in a coffee shop are having lots of plants around, friendly staff, really good coffee, and then, obviously, the cats,” Cook said.

Not everyone is as enthusiastic about cat cafés. The concept has drawn criticism from international animal rights groups, such as the Royal Society for the Prevention of Cruelty to Animals, that argue that cats should not be kept in close quarters with one another or come into contact with large groups of people. Kristin said that although people have expressed concern about the cats’ constant interaction with humans, all cats in the café are social, and the cats can choose to leave the room or sit on the cat room’s shelves that humans can’t reach. She also said the café is working on a low–energy room for calmer cats, which will have a visitor age minimum of 8 years old.

Currently, customers of all ages are accepted into the cat room. Kristin said the youngest visitor was 3 weeks old while the oldest was 98 years old.

The cat room is open from 11 a.m. to 6:30 p.m. every day except Wednesday, and the cats sleep from 2:30 p.m. to 4:30 p.m. every day. Kristin said this cat nap time appeals to people that want quiet company from cats while they read or relax.

During this time, Marigold sleeps on a shelf. Two kittens — Moira and Mel — lounge on cat beds. Even as people bump shoulders while crowding around the cats, trying to find a spare bit of fur to pet, they continue to sleep. Lucy Xie picks up Mel from her cat bed and stands her up on the ground. Mel stumbles forward a few steps before plopping back down on the rug, draping her body over a toy and falling to sleep. All the cats are unruffled by any of the human contact.

Kristin said a cat café allows people to spend time with animals when they may have housing, financial or health limitations that prevent them from adopting long-term cat companions. She also said the calming cat atmosphere appeals to people, particularly if they are stressed or overwhelmed.

“We don’t get enough human interaction, never mind nonjudgemental animal interaction, and I just think it meets an emotional need in a lot of people,” Kristin said. “And we don’t make as much poop as a dog café, so there.”