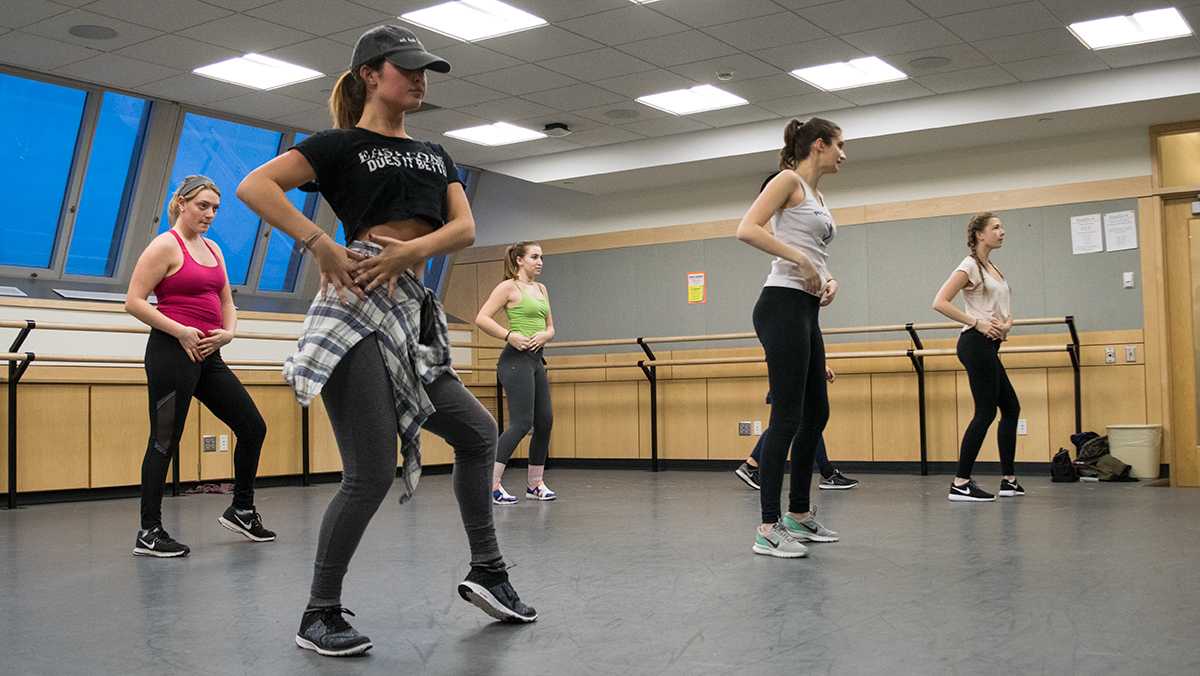 Freshman Madison D’Amico remembers her dance days, spending endless hours practicing and bonding with her dance group as a child. When she arrived at Ithaca College, she immediately began auditioning for the college’s dance groups — IC Unbound, Pulse and the IC Dance Team — to try to recreate this feeling.

However, D’Amico yearned for an experience more similar to what hers was growing up. Her nostalgia drove her to create her own dance company.

“Dancing in a studio, you would practice two hours a day, Monday through Friday, in a different style every single day,” D’Amico said. “None of the companies did that, and that was so weird to me.”

She found a group of nine other women at the college who said they felt similarly and created IC Defy, a dance group that seeks to deliver an interconnected, nostalgic experience and invite a variety of dance styles into one group. She created the group in Fall 2016, but the group only started dancing this semester.

One of the dances they perform is to the beat of Ariana Grande’s “Side to Side” in a hip-hop style. The dancers’ body language suggests grace yet power as they move and slide to the beat in unison.

“The difference between my company and the other opportunities to dance on campus is that a lot of the companies … either focus on one style or don’t have as big of a commitment,” D’Amico said. “For a lot of people who dance at a studio or at home … they would do a different style every day.”

Freshman Miriam Ludwig, a member of the group’s executive board, said she likes the group because it not only practices dance to prepare for a performance but also to work on technique and improve on an individual basis.

“All other companies are great, but I like IC Defy because of the focus on improvement, and that I get to do a lot of different types of dance,” Ludwig said. “We’re very much about helping each other and boosting each other up.”

Ludwig said she had been practicing dance from a young age and that it had been an important part of her life as she was growing up. However, she didn’t pursue dance at all in Fall 2016.

“I realized I missed it a lot, and then Maddy came to me with this great opportunity, and it brought back something to my life that I really love,” Ludwig said.

Freshman Maya Lazar, also an executive board member, said she likes the group because it reminded her of being at a dance studio as a child. Lazar is also a member of IC Unbound, but she said she wanted to be part of a dance group where members have a closer personal connection to one another.

“We all are girls who come from a background where we had practice every single night, and we grew up with and became close with the girls in our studio,” Lazar said.

The other dance groups on campus, Lazar said, are more performance-based. In IC Unbound, dancers audition for each dance separately and only know the people also performing that dance. After the performance, there is no guarantee a dancer will remain in Unbound since each dance holds separate auditions. Lazar said IC Defy focuses on growing as dancers and closeness to one another, which is what she likes most about the club.

Sophomore Hikari Leon, social media chair of IC Unbound, said that while dancers may participate in only five dances, they’re the opportunity to choreograph dances after completing a semester with the company. Every other weekend, Leon said, the company meets as a whole to for a rehearsal to give company members a chance to see each piece.

IC Defy meets from 5:30 to 6:30 p.m. Monday through Wednesday in Job 161. Its first performance is planned for September, D’Amico said. They will be performing dances in the style of hip–hop, lyrical, contemporary and jazz.

D’Amico found her own love for dance at the young age of 3.

“Dancing has become such a big part of who I am,” she said. “When I’m upset, or frustrated, or stressed out, I just want to dance. There’s something so freeing about being able to forget about what’s going on and focus on something else.”

The group is currently in its trial semester, testing how it will function in the future. For this reason, D’Amico said, the group is not taking any new members until the Fall 2017 semester. She plans on recruiting more members through auditions.

D’Amico said the dance world can be very cutthroat, particularly about body image and technique, but she wants a place where everyone is welcome.


“I don’t want to impose stereotypes, like ‘You have to be 6 feet tall and skinny,’” D’Amico said. “I want it to be a place where any shape, size, color, gender and sexuality is welcome. I want anyone who loves to dance and believes in what we do to be a part of my company.”