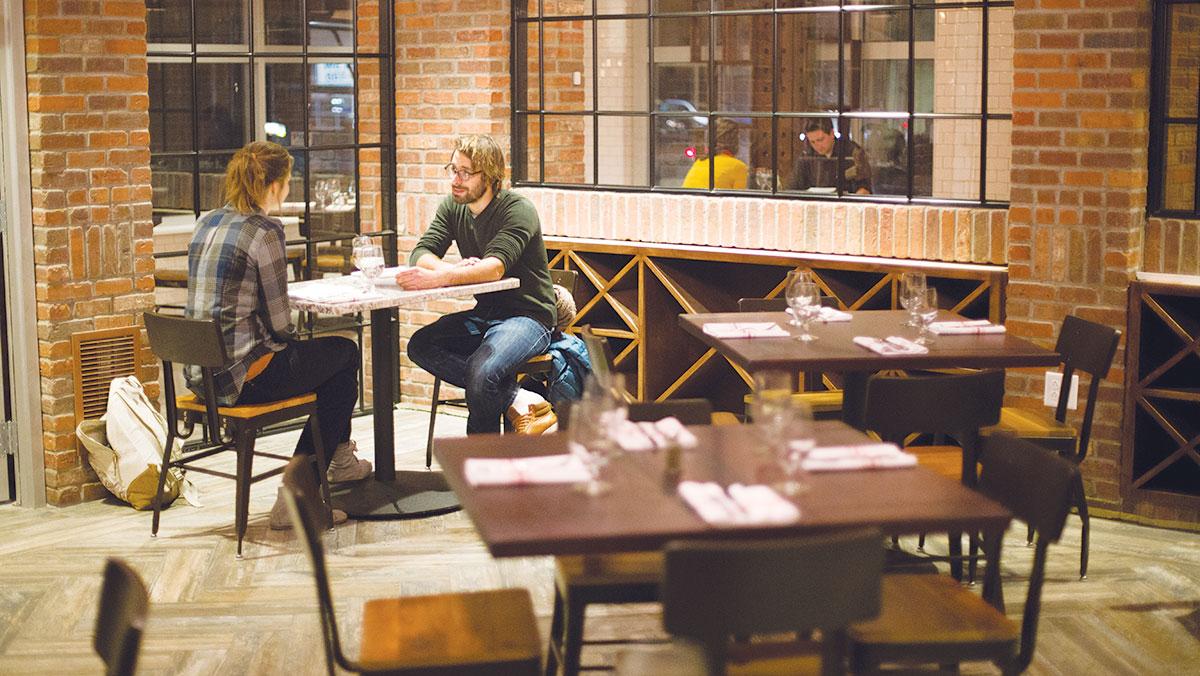 Denis Boucher struts around the construction site energetically. The white hard hat balanced atop his balding head doesn’t fit with the rest of his attire — a snappy maroon-colored shirt, black pants and striped tie, complete with a polished fork tie clip. His booming, baritone voice echoes in the space and is easy to hear over the hammering of nails and the whining of drills.

His excitement is palpable as he explains what will go where. He points to a slab of plywood: There’s the bar. A brick wall with a hole in it will be the wood-burning oven for pizzas. The wine cellar will be housed in the circle of bricks in the middle of the dining room. He runs over to a cavernous room bathed in sunlight spilling out of the large windows, which he explains is the event space, and, after getting the OK from the construction workers milling about, he hits a switch. It activates two black wings hanging from the ceiling. They buzz and slowly crest down to the floor, bifurcating the room so that when the restaurant is open they can split up the event space.

This is Nov. 10, about a month before the Dec. 13 opening of Coltivare, which aims to serve as both a restaurant and a place of learning for Tompkins Cortland Community College students in the Hotel and Restaurant Management, Wine Marketing, Sustainable Farming and Food Systems, and Culinary Arts programs. The focus of Coltivare is farm to bistro. In order to achieve this, TC3 has opened a farm near the campus, which will work in partnership with the restaurant, sending food to the restaurant to be implemented in the menu seasonally. Boucher, the director of Coltivare, said the restaurant will try to use as many local ingredients as possible.

“My charge was to make sure that our mission statement matched what it is that the college was looking for: sustainable farming food systems,” Boucher said. “That means that we can now grow the food that will actually come here.”

The way it will work, generally, is students will take classes and then do practical applications of those classes in the restaurant. Coltivare has a full staff in addition to the TC3 students, so they do not have to close during normal school breaks, and the students can work alongside the staff to increase the learning experience.

“It’s very strongly like the medical profession in how they train their doctors, because they do clinicals all the time,” Boucher said. “They’re getting into knowing what these illnesses are, or whatever. It’s the same with us. We have clinicals. They’re getting to know the rigors of the industry by working side-by-side with the staff.”

Down to the wire

It’s eight days until opening, and the buzz at Coltivare is reflecting that fast-approaching deadline. Construction sounds have quieted some. However, the shells of hardhats still lay about the back room, and workmen can be heard pounding away at the restaurant’s finishing touches.

Boucher is a bit less jolly now. He’s confined to his office, taking meetings with his associates, finalizing the plans for opening. There’s the air of stale urgency — of stress. Sue Stafford, associate professor of Hotel and Restaurant Management at TC3, said this sort of atmosphere is to be expected.

“Everything’s stressful when you’re getting ready to open in terms of being ready on time, having everything that you need,” she said.

Stafford was one of the first to be involved in the development of the new program. Coltivare officially began last year when Carl Haynes, president of TC3, approached Stafford about starting a sustainable farming program that could be paired with a restaurant and wine center. After receiving more than $2 million in grants, Boucher said, they purchased the space on 235 S. Cayuga St., which was formerly a wine center.

Then, Stafford said, it was a matter of developing a curriculum that could integrate the four programs smoothly. In this “inaugural class,” as Stafford calls it, the students have had to be adaptable. Without a finished space to work in until recently, they had to frontload certain parts of the curriculum. First, all of the students took a food safety and sanitation class. Then they sat through a few weeks of lectures on food and menu development. Finally, they were able to get into the stainless steel food labs at Coltivare and begin to actually practice what they had learned in the classroom and serve the food to customers.

“There’s going to be real customers testing this food,” Stafford said. “How else do you know if you’re doing it right? We’ve got an educational community where there’s many people in our community that are dedicated to that education. We’re hoping that they appreciate the mistakes as well as the successes.”

Stafford said it’s important to her that the students, regardless of program, learn how to run all sides of a restaurant. In addition to working in the kitchen, students will be expected to master the front end of a restaurant, working as waiters and hosts. 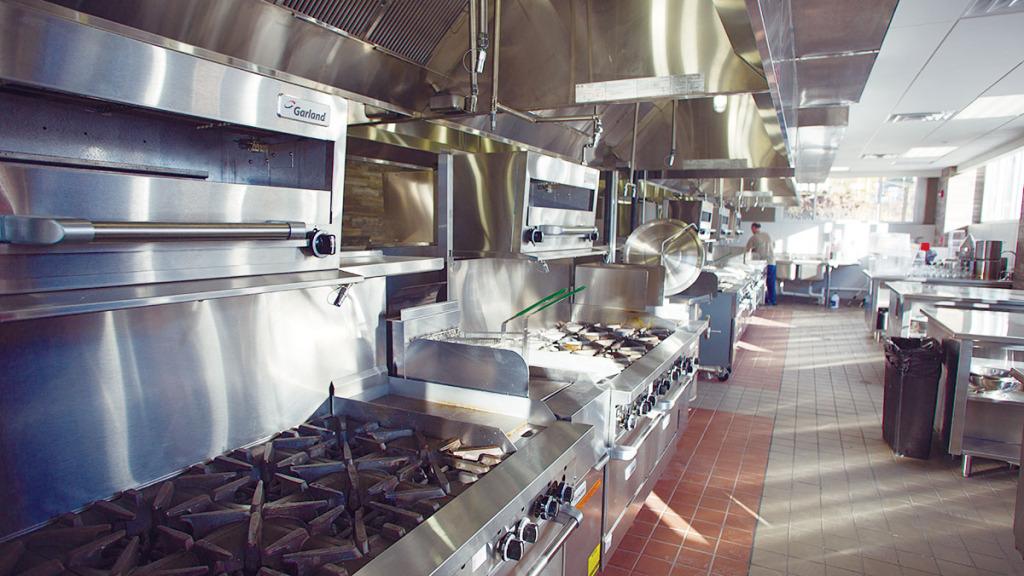 It’s a Thursday night Introduction to Hospitality class taught by Stafford on the TC3 Dryden campus. Today, two Wegmans employees are giving something of a “come-work-for-Wegmans” sales pitch and sushi-rolling demonstration for the 13 or so students.

Stafford smiles proudly at her students as they listen to the lecture. She said all of them come from different backgrounds: some have worked in restaurants, others barely know basic sauces. She has students as young as 18 and as old as 60, and she said she loves the diversity of her classes.

Because these are first-year students, many of them with little previous experience, Boucher said the classes have stressed the basics.

Students gather around a makeshift sushi station as Wegmans chef Michael Jamieson prepares a sushi roll. He wets his hands with oil and grabs a handful of rice, rolling it between his palms until it is a perfectly round white rice snowball. He flattens it on a large seaweed square, pressing it with his fingers until the white evenly covers the dark green seaweed. Satisfied, he flips it over. As he grabs a tendril of crab meat and a long baton of carrot, he discusses proper placement of the ingredients on the seaweed. He pinches and rolls the sushi, grabs a knife and halves the roll twice.

He offers the students a crack at it. They seem a bit hesitant, joking with each other as they sheepishly stand back from the food. Stafford calls out an encouragement, “Just give it a try. You can’t do it unless you try.”

Emboldened, volunteers begin to step up. It’s clear that many of these students are enthusiastic novices. Jamieson leans down to help a student with the proper knife technique — make your hands like a claw, he says, curling the tips of his fingers under his knuckles and grazing the side of the knife against them, so it’s harder to accidentally cut off a piece of finger.

One of the first students to volunteer is Robert Vicioso. He’s been cracking jokes throughout the class, but once he starts making the sushi roll, it’s clear he’s serious about making food. He finishes rolling and cutting his sushi much faster than the other student who went up with him, and he chats with Jamieson about knives as he does it. Vicioso said he has been working in the culinary industry with his dad since he was 9 and currently works at Chipotle. He said he’s never worked in an environment like Coltivare, which gave him hands-on experience so quickly.

“I’d worked in the industry, but jumping in like that, it was completely different,” Vicioso said. “It was hard on me at first, but I got the hang of it, little by little, and now it’s just easy and I always look forward to going to class.” 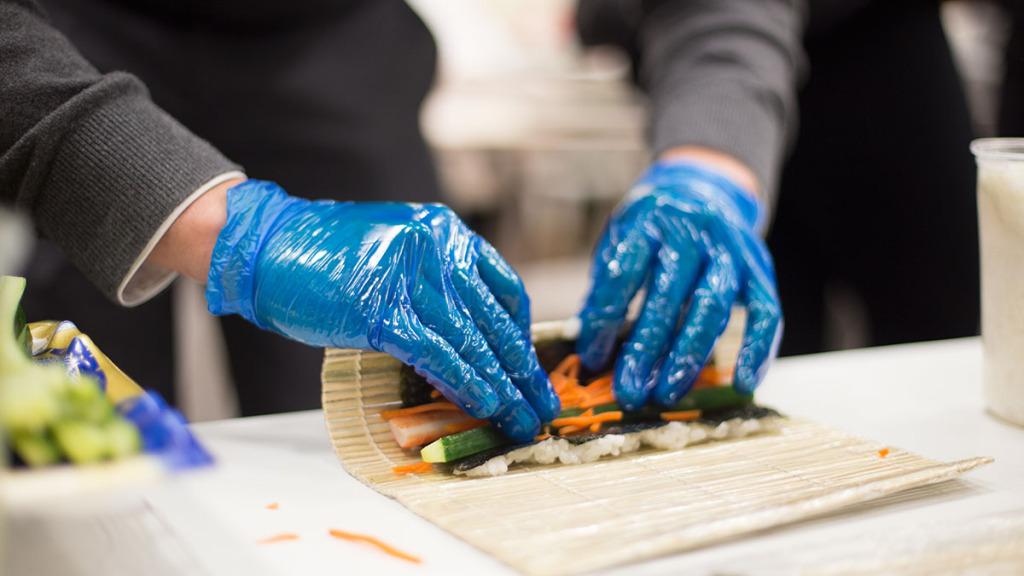 Wearing protective gloves, Robert Vicioso rolls some sushi during a workshop Dec. 4. Vicioso, who has experience in the food industry, said he enjoys the hands-on methods of Coltivare. TUCKER MITCHELL/THE ITHACAN

It’s Dec. 5, and the staff of Coltivare has barely a week to go until officially opening. The restaurant is holding soft openings all weekend, inviting family and friends to come and experience the food and ambiance, the latter of which is still a bit of a work in progress. The waiters, dressed in button-down white shirts and black pants, are gathered around the partially finished bar, filling salt shakers and wiping glasses, waiting for the patrons to arrive.

Boucher is running around greeting people and giving orders to the staff. He seems rushed but cheerful, taking time to chat with the customers and give them abbreviated tours. The main dining area is more-or-less finished. The decor is a marriage of rustic and modern. Edison lightbulbs glitter on the red brick walls. The ceiling is an intricate stamped aluminum. There are still some areas that need attention. The shiny granite countertop of the bar is halfway on, still exposing some of the plywood interior. The bar taps lay off to the side, uninstalled, like the forgotten skeleton of a snake. For the most part, though, it looks about ready to open.

During the official opening on Dec. 13, the students will debut their final project, called “Tasteful Sensations.” Here, Stafford said, groups of students in the Culinary Arts program create an appetizer or a small plate, and students in the Wine Marketing program pair wines with the dishes. Vicioso said his group is keeping its recipe under wraps until the opening, but he’s pretty nervous about the big reveal, particularly because it will be given to real customers.

“On Wednesday, we’re doing crazy amounts of prep and I’m nervous about that,” he said. “At the same time, there’s excitement. I’m looking forward to it and feeling a sense of urgency and trying to get it done as much as we can for the opening.”

Stafford said she knows the students must be nervous to be feeding their final projects to customers, but she thinks the foodies of Ithaca will embrace the educational experience Coltivare offers.

“We’ve really positioned ourselves well to bring this kind of a program to this region,” Stafford said. “I think students that come here will have a very unique opportunity in education by participating. It’s not just a school trying to make a program work to boost enrollment. It’s an entire three-community, 14-county region that has come together to make this a culinary phenomenon that has appeal worldwide.”