One Singular Sensation: Main Stage puts on ‘A Chorus Line’ 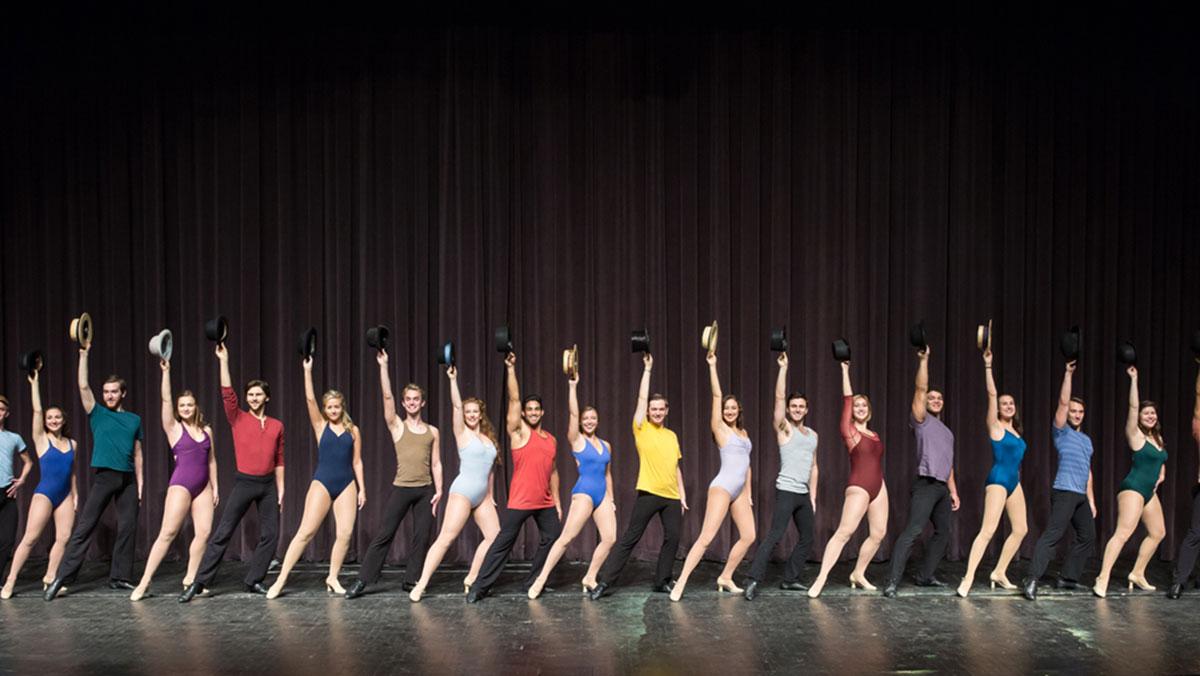 More than a dozen anxious men and women in colorful leotards dance in front of a stage-length mirror, following a choreographer’s instructions. Though it may seem like a scene out of any musical rehearsal, this sequence is the iconic opening of the play “A Chorus Line.” The quintessential show about the audition process for a musical will soon take the Ithaca College Main Stage.

The college’s Department of Theatre Arts has lined up its second Main Stage show of the season, “A Chorus Line,” originally directed and choreographed by Michael Bennett. The stories the characters tell within the production are based on the lives and careers of real Broadway dancers whom Bennett interviewed. “A Chorus Line” is a musical that examines a day in the lives of a group of dancers who compete and audition for a spot in a Broadway musical. Full of funny and heartbreaking moments, the show follows the personal challenges of the dancers and their love for dance.

For director and co-choreographer Mary Corsaro, “A Chorus Line” is her last show at the college after 31 years as an associate professor in the Department of Theatre Arts. Over the years, Corsaro has directed and choreographed over 60 musicals in academic and professional venues. Corsaro has been the coordinator of the Bachelor of Fine Arts in musical theater since 1985 and has worked with many students who have gone on and been very successful on Broadway, one of them being Aaron Tveit, who visited the college recently to host a musical theater workshop with the senior musical theater students.

Corsaro chose this musical to be her swan song show because it’s near and dear to her heart. She had moved from Indiana to New York City in 1975, the same year that “A Chorus Line” opened on Broadway. She saw the show on Broadway 13 times with the original cast and said she fell in love with it, especially because she is a dancer. Corsaro also did “A Chorus Line” in 1991 at the college. She said she isn’t approaching this production very differently than the first time and said she believes it would be difficult to reimagine it because the musical was done so perfectly on Broadway.

“For me, it’s an iconic show. It’s a show about real people,” Corsaro said. “It is true stories from people’s lives that are up there on that stage, and I think people can feel that, and I think that’s why they relate to it.”

Roy Lightner, instructor of dance, is the associate director and co-choreographer of the musical, and said working with Corsaro has been a dream.

“I’ve never met someone more knowledgeable of the history of musical theater,” Lightner said. “She is like a walking encyclopedia of knowledge of this art form, which is very rare to find — someone of her caliber.”

Not only has collaborating with Corsaro been a great experience for Lightner, but he said he has also thoroughly enjoyed working with the students. Lightner said “A Chorus Line” is a demanding show, and it requires the actors and actresses to be a true triple threat in terms of acting, singing and dancing. He said working with the students and watching them learn, struggle and succeed throughout the rehearsal process has been a gratifying experience for him.

“They are hungry, and they are constantly trying and are always pushing to be better,” Lightner said. “I hold them to the same standards that I hold professionals because I believe them to be professionals.”

Corsaro agreed that this is a difficult show for the students to do. She said it’s been exciting to watch them improve so much over the rehearsal period. Many of the actors and actresses going into this project weren’t all dancers, and she said she now sees how her students have realized their full potential at this point.

“I think a lot of the students are being pushed to dance better than they have ever danced in their lives,” Corsaro said.

Alexa Cepeda, a senior musical theater major, said the show has definitely been demanding and challenging, but rewarding. The show takes plenty of stamina and endurance, and this has been one of the biggest challenges that she and her cast members have faced.

“It’s physically very exhausting because we have to sing and dance at the same time and regulate our breathing,” Cepeda said. “It takes a lot of strength.”

Senior acting major Emily Loewus said she experienced similar challenges with endurance but faced another obstacle as well. As an acting major and dance minor, she said she feels far more confident with those skills than she does with her singing. Though her character never has a solo in the show, she does sing during the ensemble numbers, so she has had to work on her voice during the rehearsal process.

Loewus took a class with Corsaro in Spring 2015 called Dance for the Musical Stage and said it was a blessing for her to be able to develop a relationship with Corsaro. Loewus said she appreciates that Corsaro tells her what she can improve and work on to get better.

“As an acting major, to be in a musical is not always a guarantee, so the fact that I actually got to exercise this muscle of taking all three aspects of stage performance and doing them in one thing is really exciting,” Loewus said. “[Mary’s] been so patient with me and so generous about allowing me to play and find this character.”

Joel Gelpe, music director and vocal coach in the Department of Theatre Arts, teaches the music to the cast members and rehearses and conducts the orchestra for the show. He has been working with the cast from the beginning of the rehearsal period but does not practice with the orchestra until a week and a half before the show opens.

“I remember when I first started here, they would have orchestra rehearsals earlier but less frequently, maybe like once a week,” Gelpe said. “They decided that it was better to just have them every night for one week and do it in a concentrated way. I think it’s working out pretty well that way.”

Gelpe is very familiar with the music from the show because he was a keyboardist for a national tour of “A Chorus Line” in the mid-1980s.

“I played it almost every night for about eight months, so I knew it way back then,” Gelpe said. “It’s kind of cool to be revisiting it — this time as conductor — with a much bigger orchestra.”

Gelpe said there are many unusual aspects of “A Chorus Line,” one of them being that the show doesn’t have an intermission. The show — an hour and 45 minutes — only contains one act. Additionally, there is always music playing throughout the show with hardly any breaks.

“There’s practically always music underneath scenes. It’s a really demanding show to conduct, even though it’s just one act,” Gelpe said. “It’s constant music, so as soon as you finish one piece, you turn the page and you start all over again on the next piece.”

Loewus said one of the show’s other strengths is the richness of its characters. She said she and her cast members have thoughtfully studied their characters and have created a personal connection with them.

Cepeda agreed that the show is more character-driven than plot-driven, which is different from most shows she has performed in. Understanding the personalities of the characters, seeing them struggle and what their dreams are, is the most important part of “A Chorus Line,” Cepeda said.

“I think the characters and their stories and their point of view is what drives it forward,” Cepeda said.

Loewus said she believes this is a Broadway-quality show they are putting on. The finale of the show will feature not only the show’s original choreography but also some rented costumes of performers from the 2006 Broadway revival. She will be wearing a costume that was also worn by Krysta Rodriguez, who has been in the television show “Smash” and Broadway productions such as “In The Heights,” “The Addams Family,” “First Date the Musical” and is currently in “Spring Awakening.”

Loewus has seen many impressive shows here at the college but said she is most impressed with this one.

“The level of Broadway that we are bringing to the Hoerner is pretty astounding,” she said.