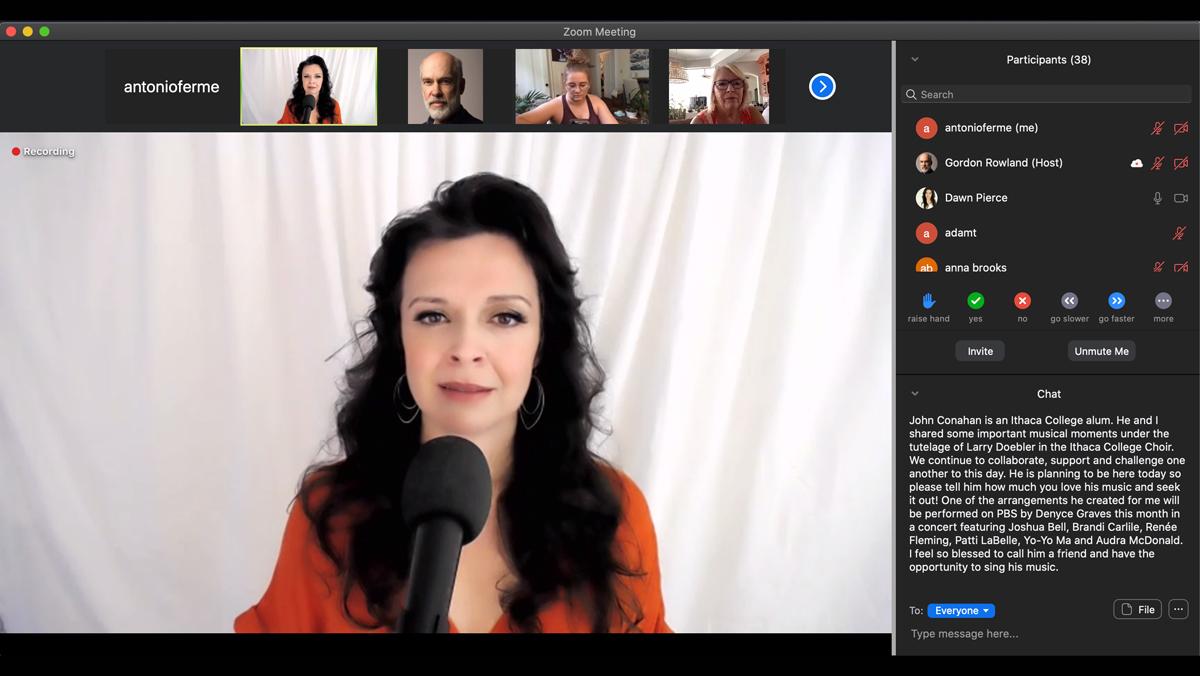 On a Friday evening in September, Dawn Pierce, assistant professor in the Ithaca College Department of Performance Studies, sang an operatic piece and played the piano in front of a white curtain on Zoom. While some viewers were sitting back and relaxing, others were reading a book or knitting, all from the comfort of their own homes.

Pierce was featured on an ongoing Zoom series called “Fine Artists at Five,” or FA@5, an event hosted by the Center for Faculty Excellence (CFE). At 5 p.m. on Fridays this fall, the series will highlight a college faculty member sharing their passions with a live audience, whether it is playing music, displaying their art or discussing their new novel.

Gordon Rowland, director of the CFE, created FA@5 shortly after classes went online in March. He said the absence of live art shows inspired him to start the series.

“Cultural events are such an important part of our lives, so I thought about how we can get a little bit of that back,” Rowland said.

Pierce said that she was excited to have the chance to sing live again, despite the COVID-19 pandemic.

“The way that I’m used to communicating is as a singer, and, during this time of COVID, we don’t get that live performance,” Pierce said. “It’s something that we miss and I think people are hungry for.”

The next event Sept. 25 will feature Nicholas Walker, professor in the Department of Performance Studies. In his third appearance on the series, Walker will be showcasing all four movements of “Sonata for Contrabass and Piano.” Because FA@5 only runs for approximately 15 minutes, Walker said that it does not require a lot of effort to participate.

“I think the fact that it’s at five often leads to a feeling of a happy hour or a fun gathering at a pub after work,” Walker said. “It’s also not so long, so if I have plans to run out to go to the grocery store and it’s five, I can just show it and enjoy my colleagues for 15 minutes and then move on. You can even be chopping vegetables while you’re making dinner.”

Every month, Rowland and Christin Schillinger, assistant professor in the Department of Performance Studies, are alternating the role of host. With Rowland currently hosting the show in September, Schillinger will take on the role in October.

The first episode was livestreamed March 30. In the spring semester, new episodes premiered every weekday. At first, Rowland said that he only intended to run FA@5 for a few weeks while people were in quarantine. However, the series became more popular than he initially expected, with up to 40 people attending every time. Rowland ran the show for eight weeks until the end of the spring semester, with just under 40 performers making appearances.

On May 1, Schillinger appeared as a guest on FA@5. Schillinger said that musicians thrive on a live audience, an aspect that made the series so alluring to her.

“You have a trifecta relationship between a composer, performers and the audience, and to have that live element stripped away was heartbreaking,” Schillinger said. “When I performed on ‘Fine Artists at Five,’ sharing my music with an audience was so rewarding.”

Over the summer, the event switched from its daily schedule to a weekly format, with performers scheduled every Friday.

“It’s a great service where you’re getting the highest caliber of artists in a very small group session for 20 minutes every Friday,” Schillinger said. “To me, it’s a win-win.”

Junior Cameron Billings, one of Schillinger’s bassoon students, attended her performance. He said that it was nice to hear live music during the pandemic and see some familiar faces attend.

“There were roughly five to 10 students in the call, most of whom were bassoon students in Dr. S’s studio,” Billings said. “It was cool to see other professors on the call as well as talking with Dr. S about the music she performed for the event.”

Rowland decided that after a Zoom-bombing during the third week that participants will need to have the link to join. Rowland said this makes the series not as easily accessible for students, but, if interested, students can reach out to him for the link. He also said that he encourages faculty members to send the link out to their students.

While Schillinger said that she wishes FA@5 could reach a wider audience, she believes the current format allows the series to be more intimate. She said that usually after an artist presents, people will stay tuned and ask questions.

“If you have a group with an audience of 100, it’s not as encouraging, and people feel anonymous,” Schillinger said. “Whereas when you have a group of 20, people are much more likely to ask questions that need to be asked.”

When looking at the future, Rowland and Schillinger said that FA@5 could become a hybrid event, both in person and on Zoom, if the campus reopens in the spring. Schillinger said that she would want to host the event in the James J. Whalen Center for Music, where artists could spend half an hour presenting.

Walker said his favorite part about the series is that it is a low-stress occasion to sustain the college community.

“The fact that it happens with some regularity and that it’s so easy [to join] somehow leaves a person feeling at the other end of it like, ‘Gosh, I’ve been on Zoom all day, but it was kind of nice to see that performance,’” Walker said.