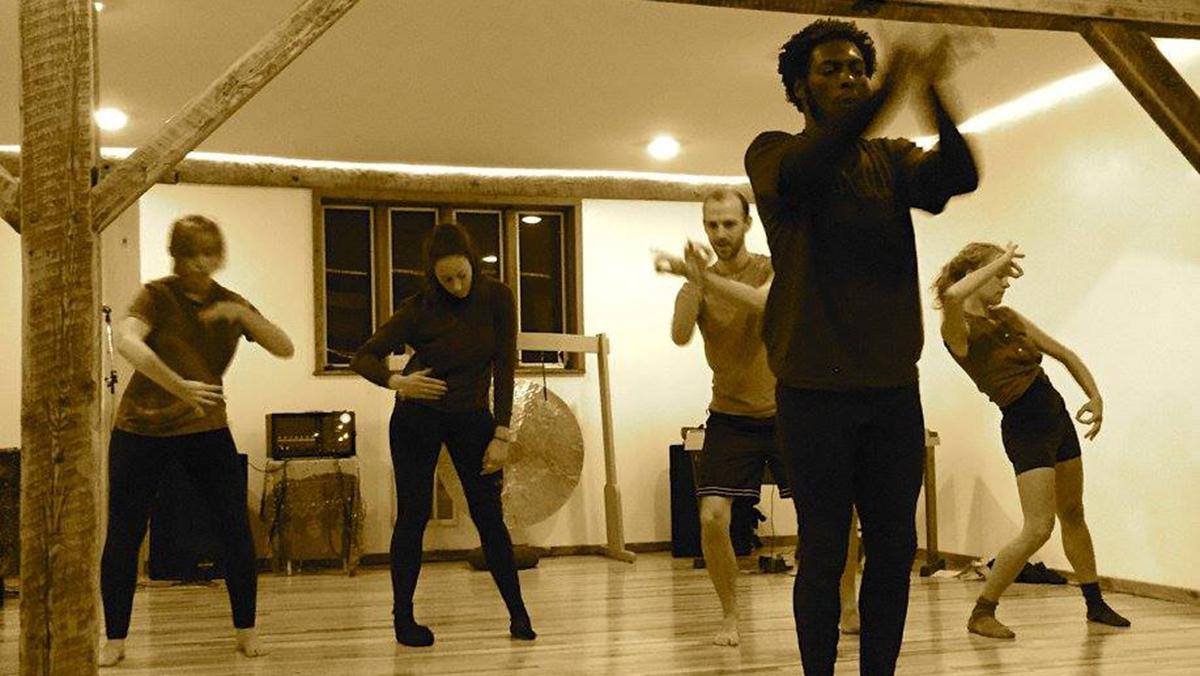 Dance had been a part of Epstein’s life since childhood, and she was looking to continue her passion after graduation. While in college, she studied psychology and danced as part of both the IC Unbound and Pulse Hip-Hop groups. Mesmerized by their modern, improvisational style, she decided to approach Steele and Driscoll after their impromptu performance and ask about how to get involved in local dance. A month later, Epstein found herself dancing in unison with Steele and Driscoll at numerous outdoor locations.

Fueled by the desire to express themselves publicly and unabashedly, members of Ithaca dance group Spiral Cracks Performance Collective use their bodies to create dynamic and eye-catching art through rhythmically organic movement.

The group’s modern style of dance is expressive — some movements are fluid and balletic, while others are rapid and angular.  The dancers do not always dance with synchronicity or uniformity: Often, their moves compliment one another’s as if engaged in conversation.

Inspired by their love of dance, Steele and Driscoll founded Spiral Cracks in June 2016. The pair met at the Yoga Farm in Lansing, New York. The nature of this location emphasizes the connection with the self, others and unaltered nature. These values influenced Spiral Cracks’ mission to use movement to express the interconnection among people, their environments and their communities.

“The [Yoga Farm] itself was built with very conscious attention to coexisting with nature,” Steele said. “Since we met each other there and started dancing there, some of that way of looking at and coexisting with the world came with us into the group’s vision.”

Since its founding, Spiral Cracks has grown from the duo to a group of seven. Steele said his and Driscoll’s jobs as co-founders include artistically directing the group and figuring out logistics such as booking performances and seeking funding.

Though many of Spiral Cracks’ performances are largely improvised, Steele said, the group has a growing repertoire of choreographed modern dance–style pieces. He said the source of the choreography differs, as sometimes he and Driscoll come up with prompts or moves, while other times they invite other members to create.

“We aren’t trying to achieve an unreal synchronicity, and so we have a lot of our choreography up to individual interpretation. There’s not a whole lot of correcting involved because we want whoever is learning the choreography to learn it naturally,” Steele said.

Additionally, Spiral Cracks’ performances are collaborative in that they draw upon the wide range of member and local talent across different mediums of art beyond dance. For example, Epstein said the group’s performances have included elements of spoken-word poetry and singing. Steele often produces the music the group dances to, but the group has also put on shows with other local artists, including Thaelo, a spoken-word and new-wave musician.

Spiral Cracks has performed at a variety of spots in and around Ithaca, including the Ithaca Farmers Market, the Community School of Music and Arts, Sacred Root Kava Lounge & Tea Bar, and Porchfest. However, the group does not need to be part of a formal event to turn an area into its stage. Members have danced at private and underground shows, and have also given impromptu performances on The Commons.

Epstein said many dance groups in which she performed in the past used set environments for rehearsals and performances, whereas Spiral Cracks’ members must fit themselves into their environment since they don’t have regular practice spaces.

The organic nature and community appeal of Spiral Cracks also drew Flannery Hild to the group. Hild graduated from Cornell University two years ago and met Epstein while the two were interning at Family & Children’s Service of Ithaca. Hild said they spoke about their mutual love of dance. When Epstein joined Spiral Cracks, Hild began attending their performances and getting to know the other members.

“I liked the way that they thought about art and dance, and just getting to know the members as well, I thought that they were really great people and really accepting,” Hild said. “It just seemed like a really cool group to work with.”

Before Hild officially became a part of the group, Steele invited her to perform with Spiral Cracks for its holiday show at the Community School of Music and Arts on Dec. 18.

Hild said, “I got a little taste of what it was like to be dancing with them and in the group, and that also really encouraged me to want to be a part of the group.”

After taking some time off after the holiday performance, the group is back to rehearsing. Though Steele said the group’s next headline performance will likely not be until the summertime, the members will be keeping their eyes open for upcoming local performances to get involved in.

“We’re in a phase right now of getting to know each other’s ways that we move better, and so it’s really a cultivating phase and not much of a performance-based phase,” Steele said.