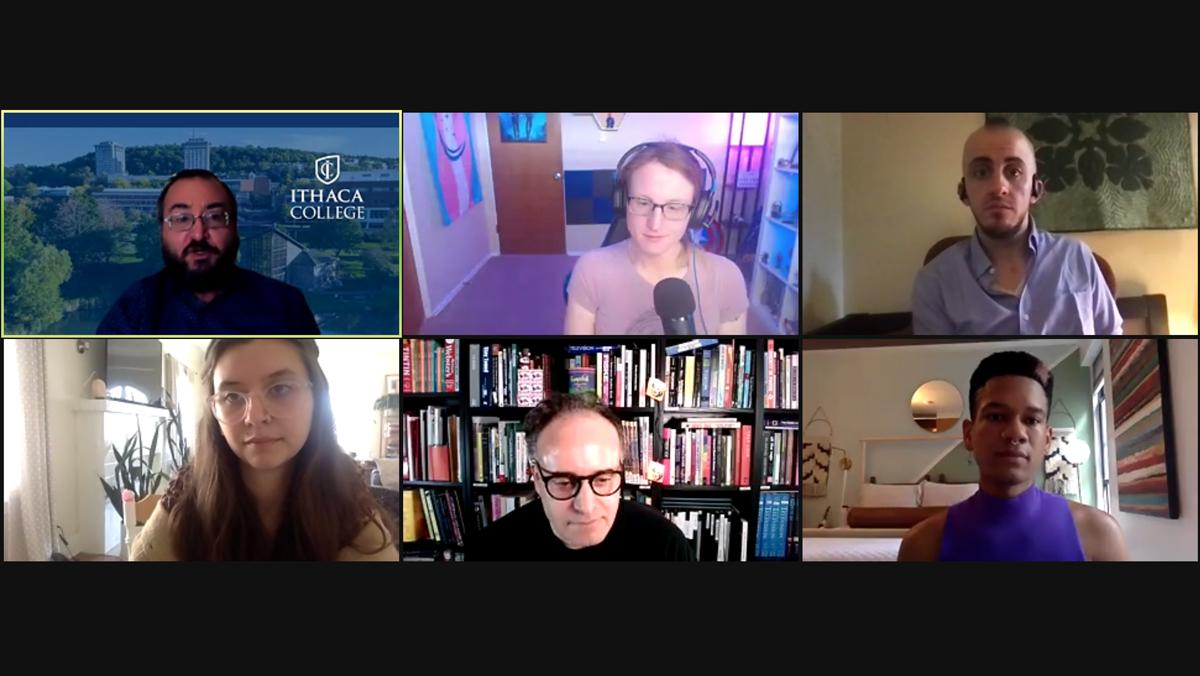 The Ithaca College Center for LGBT Education, Outreach and Services used the documentary, “Disclosure: Trans Lives on Screen,” as a starting point for its conversation about LGBTQ representation in media in a panel Feb. 26.

The panel, “Tired Tropes and Stale Stereotypes: LGBTQ Representation in Media and Arts,” consisted of LGBTQ alumni with experiences in the media and arts field. Jessie Earl ’14 is a journalist and YouTube personality who discusses LGBTQ issues and superhero and sci-fi pop culture. Calvin Kasulke ’13 is the author of the novel “Several People Are Typing,” to be released in September 2021. Ashton Muñiz ’14 is an actor, performance artist and activist based in New York City. Isabel Galupo ’14 is a staff writer for Nickelodeon and Hasbro’s recently announced Transformers television show. Stephen Tropiano, director and professor of the J.B. Pendleton Center in Los Angeles and author of “The Prime Time Closet: The History of Homosexuality on Television,” was also a panelist.

“Disclosure” came out on Netflix in 2020. Featuring Laverne Cox, Chaz Bono and Mj Rodriguez, among other transgender creatives, the documentary discusses Hollywood’s harmful impacts on the trans community.

Luca Maurer, director of LGBTQ Education, Outreach and Services, organized the event. One of Maurer’s goals for the panel was to highlight the history of the LGBTQ community. The panel discussed how the past has always been presented as stories of tragedy and not highlighted as tales of inspiration and celebration.

“The LGBTQ+ community was really loved into existence, primarily by trans women of color who lived in times that were so much more difficult and dangerous,” Maurer said. “Sylvia Rivera, Marsha P. Johnson … there are people in our history who were caring for our community, looking after each other, way before there was an idea of a network of mutual aid.”

Earl said the media is a major influence on people’s perception. This has been exhibited with gay men being perceived as sexual predators because of the Hays Code. The Hays Code was a Hollywood Production code from the mid-20th century that in part banned sexual perversion in films.

“We see the framing of trans people as ‘deceivers’ in film and television, informing legislation in politics with trans people in bathrooms and sports,” Earl said.

Tropiano said it is important to write for younger audiences. He said that up until recently, there were no portrayals of LGBTQ youth.

“Even though we are in this culture where there are more things on TV and there are more people who are ‘out’ … there’s still that person who is struggling … we can’t just assume that because things are more visible, we are alright,” Tropiano said.

Members of the panel stressed the importance of authenticity in writing LGBTQ characters going forward. They spotlighted the need for a greater LGBTQ presence both in front of and behind the camera, and that the predominant voices telling LGBTQ stories should come from the community.

The Gay and Lesbian Alliance Against Defamation (GLAAD) reported that LGBTQ representation in film has been increasing. In 2019, more LGBTQ-inclusive movies were released than ever before, with 18.6% of major studio films including LGBTQ characters. However, no major studio releases in 2019 included a single transgender character.

Galupo said that in her experience, a lack of diversity in the writing room is not conducive to the creative process.

“Your writing is always going to be better if you have a diverse room that is representative of so many different types of people … because new ideas and interesting ideas come out of tension,” Galupo said. “The best writing experiences I’ve ever had have been in rooms where … we all have different identities.”

The call to action from both the film and the panel is for creators to tell LGBTQ stories with integrity, authenticity and with the community as part of the process.

“If you can’t see yourself or see … images of people like you or what you might be, it becomes difficult to imagine a future for yourself,” Kasulke said.