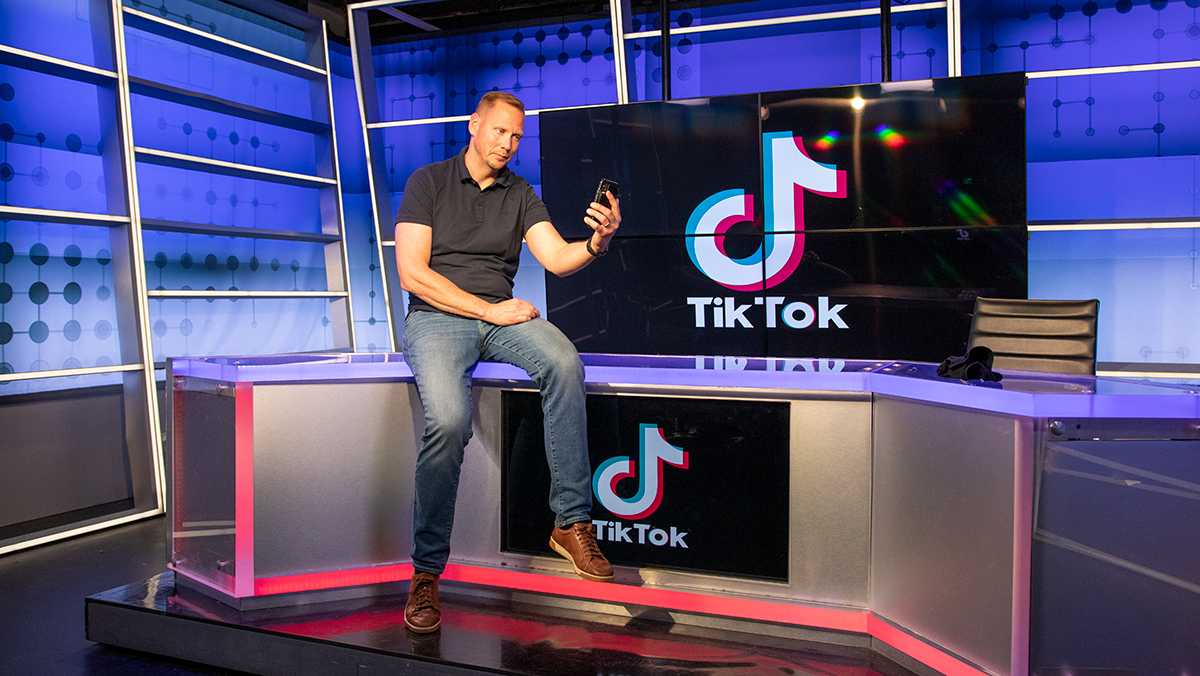 In a TikTok video, a man is wearing a half-blue and half-red shirt with the words “Tru-den Pen-ris” printed on it. On half of his head is a “Make America Great Again” hat — a well–known sign of a supporter of former President Donald Trump — and he wears half of a disposable mask on half of his face.

The man behind “Tru-den Pen-ris” is none other than Peter Johanns, associate professor in the Department of Media Arts, Sciences and Studies at Ithaca College. Johanns teaches classes like Advanced Studio Production, Broadcast Performance, Television Production and Direction, and Introduction to Audio Production in the Roy H. Park School of Communications. Approximately six months ago, Johanns created a TikTok account and went viral.

Johanns posted his first TikTok — the Tru-den Pen-ris video — Oct. 30, 2020, the day before Halloween. The comment section of the video was flooded with over 580 comments of users laughing at the costume and voicing their own political opinions.

“I came up with the concept of a ‘Tru-den Pen-ris’ Halloween costume that kind of played off the Trump and Biden election,” Johanns said. “I thought that people would fight over it in the comments. … I was correct in that assumption.”

After the success of his first video, Johanns made approximately 18 more TikToks wearing his popular “Tru-den Pen-ris” shirt — in many of which he sports a pair of tiny denim shorts. He said many of his first few videos were of him asking viewers questions about voting and following the progress of the election. Johanns concluded the “Tru-den Pen-ris” series Nov. 26, 2020, after the presidential election season ended.

Johanns said he is currently teaching a broadcast performance course. The class is focused on preparing students to be on-air talent for television news, sports and entertainment. He said the success of his TikTok has encouraged Johanns to broaden the content of the class.

Johanns hopes to use his experience with TikTok to show his students the different talent positions social media can offer.

“I anticipate in the fall being able to incorporate the utilization of TikTok and other social media content distribution within my class,” Johanns said.

Junior Justin Wilkins is a student in Johanns’ broadcast performance class. He said he was surprised to see that his professor had a TikTok, but also said it was on-brand for him.

“I think it’s pretty funny,” Wilkins said. “Out of all the television-radio professors, it had to be Pete. He’s very well known in the program for being a funny but very helpful professor at the same time.”

Senior Annie Brunner is another student in Johanns’ broadcast performance class. She said she realized that her professor had a TikTok while scrolling through her TikTok For You Page — an endless scroll of recommended videos based on content a user has liked in the past.

“He showed up on my For You Page, and that’s how I found out,” she said. “I was just scrolling and I was like, ‘Oh my God I know that guy!’ and laughed.”

Shortly after his political series, Johanns began making videos with his 11-year-old son. He said these videos were scripted skits, often involving a situation in which he gives “bad parenting” advice. Johanns also said the skits include pranks on his son, most of which are planned beforehand.

“I typically come up with the video ideas on my own,” Johanns said. “I usually run the script by him and he’ll make changes if he doesn’t want to say something. He’s a very good sport about it.”

When brainstorming video ideas, Johanns said he tries to think of outlandish situations that a father would put his son in.

In one of his most recent TikToks, Johanns tells his son that he hid 12 Easter eggs in a field. He stated that if his son found all of the eggs, he would give him $100. Turning back to the camera, Johanns whispers that he only put 11 eggs in the field. In another TikTok, Johanns picks up his son from school. When he arrives at the school, he rolls down his windows and blasts pop music in front of all his son’s friends to embarrass him.

“I make two types of videos,” he said. “I either do something that is funny and absurd with my son or sometimes I’ll try to think of something that I know that will polarize people and get people to fight in the comments.”

Johanns said many people take the sarcasm and “bad parenting” humor of the videos to be serious. As a result, he has gotten many hate comments on some of the videos.

“I would like to think that most people get my sarcastic, dry and even dark humor at times,” Johanns said. “But I have also seen that there are plenty of people who don’t quite get that it’s a joke.”

Johanns said the comments can be hurtful, and there are times when he has to intervene and defend his parenting.

“The vast majority of them I ignore or laugh off,” Johanns said. “If I feel that the comments are getting too personal or insulting, I try to politely say that it was a joke.”

Johanns said he is using the videos he creates as qualitative research on the creation and distribution of comedic content on TikTok.

“I’m doing this under the guise of a research project too,” Johanns said. “I want to understand audience engagement and audience manipulation. I want to see how I can get people engaged in a video by using my own special sense of humor.”

According to Admiral Media, the average adult in the United States spends approximately 41 minutes watching videos and 75% of worldwide video viewing takes place on mobile apps. With all of the videos on TikTok, something has to set the best apart from the rest.

A study from Business of Apps explained that audiences are more responsive to content that quickly communicates the message, grabs attention or gives instant gratification. This places an emphasis on creative storytelling in order to capture the audience’s attention in seconds.

Junior Jack Culkin has taken two classes with Johanns, Television Production and Direction and Advanced Studio Production. He said he considers Johanns to be a mentor. He said Johanns’ TikToks have helped increase his confidence as on-air talent.

“The amount of confidence he has putting himself out there in front of hundreds of thousands of people is something that I see as inspirational,” he said. “Seeing his videos has taught me to be comfortable in my own shoes. I can be who I want to be and I shouldn’t care how much people judge me.”

Culkin said the TikTok account is a great way for Johanns to express himself and his personality.

“I’ve heard people say that they think it’s a little immature for a professor to have a TikTok, but you’ve got to realize that they’re people too,” he said. “Letting him express himself on this platform is a great thing.”

Jack Powers, interim dean for the Roy H. Park School of Communications, said Johanns’ experience as a TikTok creator has been important to students preparing for on-air positions.

“If a student wants to make it as on-air talent, it’s imperative to understand that the primary goal is to build an audience,” he said via email. “As a student, it must be reaffirming to know that you’re being taught by someone who can deliver a mass audience.”

Johanns said the TikTok videos he produced have recently accumulated over 107 million views, 16 million likes and earned him over 640 thousand followers from around the globe.

“When I had 10,000 followers I was like ‘Oh wow’ and then it just kept growing,” Johanns said. “… It’s fun and amusing that I have engaged people not only in this country but from around the world. I get comments from Brazil, Germany, Ireland, Russia and all sorts of places.”

Johanns said he thinks of creating TikToks with his son as a bonding experience.

“It is something fun that I like to do with my son,” he said. “He enjoys filming them and it gives us a chance to work on something together.”