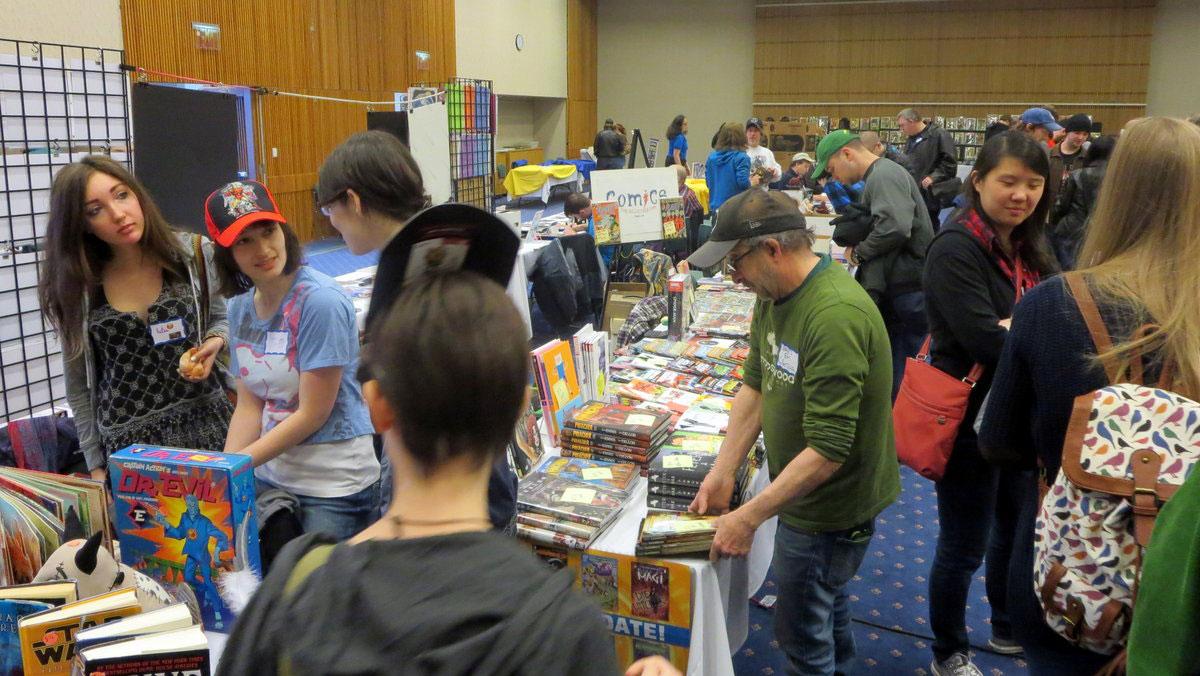 Alec Frazier/The Ithacan
People gather in Emerson Suites for ITHACON in 2013. ITHACON 40, part of the Pippi to Ripley festival, will take place May 1–2.
By Christie Citranglo — Proofreader
Published: April 29, 2015

“Nerds” are often described as individuals who treat their passions and interests with a high degree of enthusiasm. Escaping the previous negative stereotypes surrounding them, nerds of today have found a community that shares their love for fandoms, cult classics and cosplay. They have invented their own quirky and ever-expanding subculture — a subculture set to come to Ithaca College’s campus May 1–2.

The third biennial Pippi to Ripley festival will merge science fiction, fantasy, popular culture and feminism, encompassing many facets of nerd culture. Held in several locations on the college’s campus, Pippi to Ripley aims to create a union between members of the college community, the Ithaca community and the nerd community as a whole.

Pippi to Ripley will be composed of a series of five events that cater to several segments of this subculture. According to the festival’s website, there will be, “a professional development conference for middle and high school teachers; a science fiction and fantasy quiz competition; an academic conference for scholars of science fiction and fantasy, a series of critical thinking and creativity workshops for youth, and ITHACON 40, the Ithaca Comics Convention.”

Katharine Kittredge, an English professor and creator of Pippi to Ripley, said the event is meant to link people of all ages and levels of education.

“Part of what we’re trying to do is build community,” she said. “We hope that people will get a sense of community, of other people who love thinking and are passionate and knowledgeable about these things, and that they’ll come together. I think college students really don’t get enough of a sense of community as a source of information.”

As a way to build this community, Pippi to Ripley will touch upon the presence of contrasting female characters across different genres, representing the diverse range of women in fiction that often goes unrecognized. Created by Kittredge and three of her students in 2010, the name of the festival was inspired by the female protagonists in two popular, nerd-culture works of fiction: Ridley Scott’s “Alien,” in which female astronaut Ripley takes on a parasitic extraterrestrial, and Pippi Longstocking, the quirky redhead from the Swedish children’s book series of the same name. Kittredge sought to combine the spunky persona of Pippi with the gun-toting, female-warrior image of Ripley, showing how even different elements of nerd culture are working toward the same goal.

Senior writing major Carrie Haase is one of Kittredge’s students and a coordinator for the event. She describes fiction, no matter what the form, as a way to make a difference in society.

“Science fiction and fantasy can be a vehicle for social change in a lot of ways because it’s such an imaginative space,” she said. “You can write something realistic and fantastic where women are equals, and you don’t have to constrain yourself to sexist s—.”

The festival was designed to spark conversation and collaborative thinking. While most conferences separate graduate and undergraduate students, Pippi to Ripley welcomes people of all ages not only to attend a panel but to speak on one as well.

Elizabeth Bleicher, associate professor of English and Kittredge’s partner in organizing the event, said this exchange of knowledge and conversation across generations at the Pippi to Ripley conference is something she strives for and looks forward to.

“One of my favorite moments from 2013 was watching this middle school kid talk hard, hardcore shop on robotics with a college senior,” she said. “They were completely immersed. It was an intellectual exchange between two people who should not have been able to talk to each other.”

After programming events for middle school students in 2013, Kittredge and Bleicher were overwhelmed with requests to expand their audience to younger children. This year Pippi to Ripley will feature activities for preschool students and elementary school students.

Senior television-radio major Hannah Ulmen is both a student of Kittredge and a coordinator for the new activities featured at the conference.

“I’m actually in charge of making capes for the toddlers and preschoolers,” Ulmen said. “So we’ll be having a little ‘learn to be a superhero’ segment that a few of us will be doing. We help them design their superhero logo, we make them their cape, then we make a mask — stuff like that.”

In addition to its purpose as a vehicle for social change, community, creativity and conversation, Kittredge also noted Pippi to Ripley’s reinforcement of imagination, which she hopes the students of the college take away from the festival as a whole.

“I think a lot of this is really about play and celebrating a place for imagination,” she said. “The idea that reading becomes something you do as work … Remembering that you love it and you learn about things out of your passion, not because it’s assigned. I think that’s really important. … There’s so much out there to read and think about.”