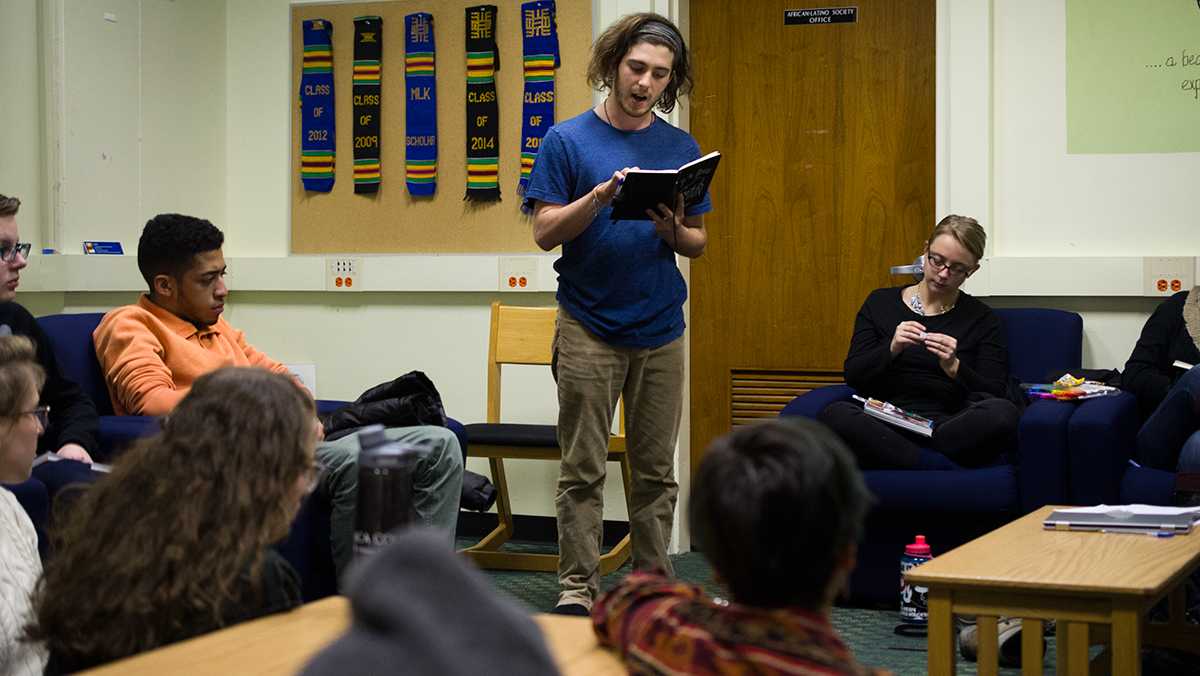 Sam Fuller/The Ithacan
During a Spit That! meeting, member Robert Amoils reads a poem. On Feb. 6, the group will square off against Cornell in a poetry slam.
By Justin Henry — Contributing Writer
Published: February 3, 2016

In a battle of the spoken word, Ithaca College’s poetry workshop and student organization, Spit That!, will face Cornell University’s Slam Poetry Club, The Swoopers & Bashers.

The poetry slam will be featured in the Mystic Water Kava Bar and Yoga Studio at 7 p.m. Feb. 6. The Ithaca College team will feature eight poets: freshman Ahshar Williams; sophomores Ava Bryan and Hannah Livernois; juniors Michaela Abbott, Toni-Marie Landy, Max Sarmiento and Jocelyn Suarez; and senior Christopher Rose. The teams will alternate in performances, totaling 16 poetry slams. The event will have three judges, individually scoring performers and then averaging the scores at the end of the night to select a winning team.

Senior Mary Oliver, president of Spit That!, said the two groups have been wanting to match pens since the beginning of the Fall 2015 semester, but scheduling conflicts prevented the groups from ever giving the event due consideration.

“The Cornell team was just created last semester,” Oliver said. “We wanted to reach out and bring the two hills together to allow us to share art and see what’s different and what’s the same. That’s why we wanted to have it at the Kava Bar, to establish some common ground.”

Oliver said her goal is for the audience members to enjoy themselves and to become more interested in Slam Poetry as an art form.
“I want Slam Poetry to be something people look into more. I want it to be a party,” Oliver said. “What’s so cool about Slam Poetry is that it takes something that is historically considered academic and stuffy and uses those same academic tools to reach out to the audience. It’s so cool to have that connection.”

Landy, who is also an executive board member, will be performing her poem “He,” a personal account of her experience with the recurring word “he” in society. She said her inspiration comes from one of the writing exercises the group uses. The poets write a poem centering on a word or concept given to them by the person next to them.

Landy said she views the evening as a celebration of the spoken word.

“It’s this form of catharsis that allows people to really get to the root of things,” she said. “It’s like a purge, but it doesn’t leave you empty. It gives you a connectedness that you can’t get anywhere else.”

Landy said she hopes the night will dispel preconceived notions people have when it comes to Slam Poetry.

“It’s not just about going to a cafe and snapping. It’s about being human,” she said. “It’s doing something that makes us vulnerable. If the audience connects with just one poem or line or emotion, that’s a success.”

Livernois will be featuring her poem “The Sistine Closet,” a letter to a covertly homosexual Michelangelo. The Renaissance sculptor and painter is a figure with whom she said she feels a close connection since he was alienated by virtue of his society’s disapproval of his sexuality.

For Livernois, poetry slams are venues for performers who feel voiceless and marginalized to know they are being heard. She said slams have the power to validate what people are experiencing.

“It’s one thing for people to read about it in a new article, but when they’re writing their heart out, it makes you really, really care,” she said.

Livernois said she hopes the audience will begin to see poetry as a force for social progress.

“It’s such a good way to bring attention to a topic,” she said. “People can view poetry as an act of change. The possibility that something I say inspires someone in the audience is mind boggling.”

Eva Jahan, president of the Swoopers & Bashers, said slam poetry has the ability to do things that a discussion cannot.

“It can be used for personal expression, with Islamophobia and the Black Lives Matter campaign,” Jahan said. “If everyone’s saying one thing, we can say, ‘No, this is not what America thinks.’”

The poetry slam will be held at 7 p.m. Feb. 6 at the Mystic Water Kava Bar and Yoga Studio on South Cayuga St.