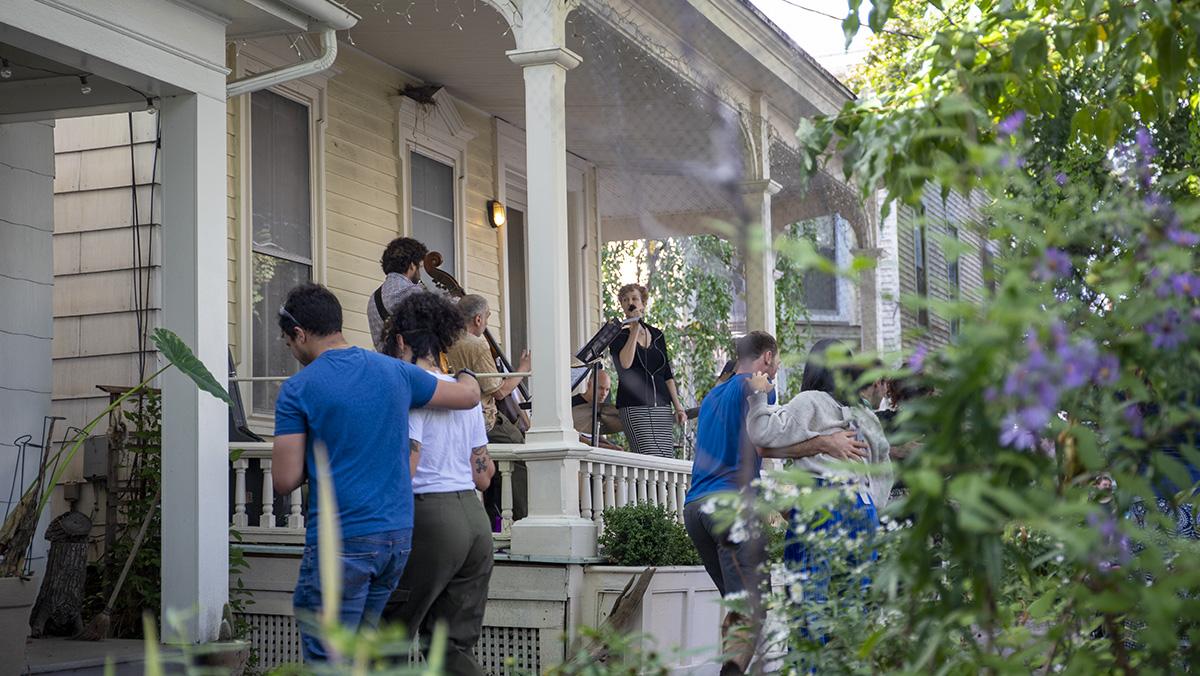 Jasmine Scriven/The Ithacan
The Diana Leich quartet performs at Porchfest on Sept. 25 as crowds of people walk by, taking in the sound of various music genres from different porches.
By Elizabeth Kharabadze — Co Life and Culture Editor
Published: September 28, 2022

As 12 p.m. hit on a rainy Sunday afternoon, porches suddenly came to life with varying sounds and vocals from performers eager to partake in a yearly tradition of bonding over music with friends, family and Ithaca locals.

Porchfest returned to Ithaca in full swing Sept. 25 following a two-year hiatus because of the COVID-19 pandemic. Each year in September, music lovers convene to witness a medley of rock, folk, gospel and choir — just to name a few — on the porches of homes in the Fall Creek and Northside neighborhoods of Ithaca.

What started as outdoor ukulele playing and a conversation between neighbors Gretchen Hildreth and Lesley Greene in 2007 evolved into an Ithaca staple, highlighting local musicians and inviting them to perform in neighborhoods they are familiar with. While only 20 groups performed at the first Porchfest in 2007, the number of participants has since expanded — welcoming approximately 150 performers at this year’s event. With Ithaca as its inspiration, Porchfest has also expanded internationally, with 170 cities across the United States and Canada hosting similar events.

Andy Adelewitz, co-organizer of Porchfest, said the driving mission of Porchfest is giving local artists the space to perform for members of the community. While the original concept started out simple in nature, he said the event has grown exponentially in recent years.

Performances were broken up into hour-long time slots, with acoustic performances starting off the day’s events at 12 p.m. and non-acoustic sets running from 1 to 6 p.m.

Adelewitz said Porchfest is a community effort. Between arranging performers, sorting out food vendors and planning street closures for pedestrians to easily bounce from porch to porch, it took a team of about 70 dedicated volunteers to bring the event to life this year. He said that despite the hardships from behind-the-scenes work, running Porchfest is something he enjoys doing.

“People will ask us, ‘why do you keep doing this year after year,’” Adelewitz said. “And the answer is always because I want Porchfest to keep happening, so we keep making it happen. That’s really all it is. And that’s the payoff.”

For some community members, Porchfest is a beloved tradition. Senior Eleanor Shanton, an Ithaca local, said she always looks forward to Porchfest and is especially glad to see the event’s return to the community after its hiatus.

“We’re still in the middle of a pandemic, but it kind of feels like things are starting to get normal again,” Shanton said. “This has been such a big, communal thing for the city for years now. … We’ve made it through what has been hitting us the past couple of years and we will continue to persevere through whatever is coming in the future.”

Adelewitz similarly said there was increased interest from the community to see the event return to its former glory. Adelewitz said that it was evident early on in 2020 that Porchfest would not be able to happen because of social distancing guidelines. While there were plans for the event’s return in 2021, he said it became clear after a certain point that planning a public gathering as large as Porchfest while following COVID-19 safety protocols was still impossible.

“It’s really exciting to have it back this year,” Adelewitz said. “We’ve heard a lot of excitement from the community. This is an event people really love. It just feels nice to be [back].”

Cornell University alumni Cristina Dabaco ’22 said she views Porchfest as a unique opportunity to form a closer connection to local artists in a way unlike other music festivals and performances.

“I think it gives people a chance to share what they’re thinking and feeling,” Dabaco said. “One of the performances we saw already I felt was communicating the artist’s unique perspective and worldview. And I feel like it seems like a good thing for a community to see your neighbors in a nice setting, but you could still … express your thoughts about the world.”

For others, Porchfest provides a link between college and local communities. Ithaca College senior Sara Ostermeier said Porchfest was one of those opportunities that provided an incentive for college students to explore the community.

“I definitely feel, like, as a college student, it makes me feel connected,” Ostermeier said. “We had Apple [Harvest Festival] last year, but it’s different than being able to just walk around and hear music.”

First-year student Sophia Kasper, who attended Porchfest for the first time this year, said she was impressed by the musical diversity of the performers and that it was a great way to support local artists.

“I love supporting other people’s passions,” Kasper said. “I guess it’s sweet; if I was doing music, I’d love [to be supported].”

Adelewitz said part of the charm of the event was the diverse range of performers — from seasoned artists to local choir groups.

“At the end of the day, it’s all about the music and the people who are making it,” Adelewitz said. “This ranges from bands that are out gigging and [at] clubs all the time all year long to people whose only gig of the year will be Porchfest. It’s all ages and all styles and there’s nothing else quite like it.”