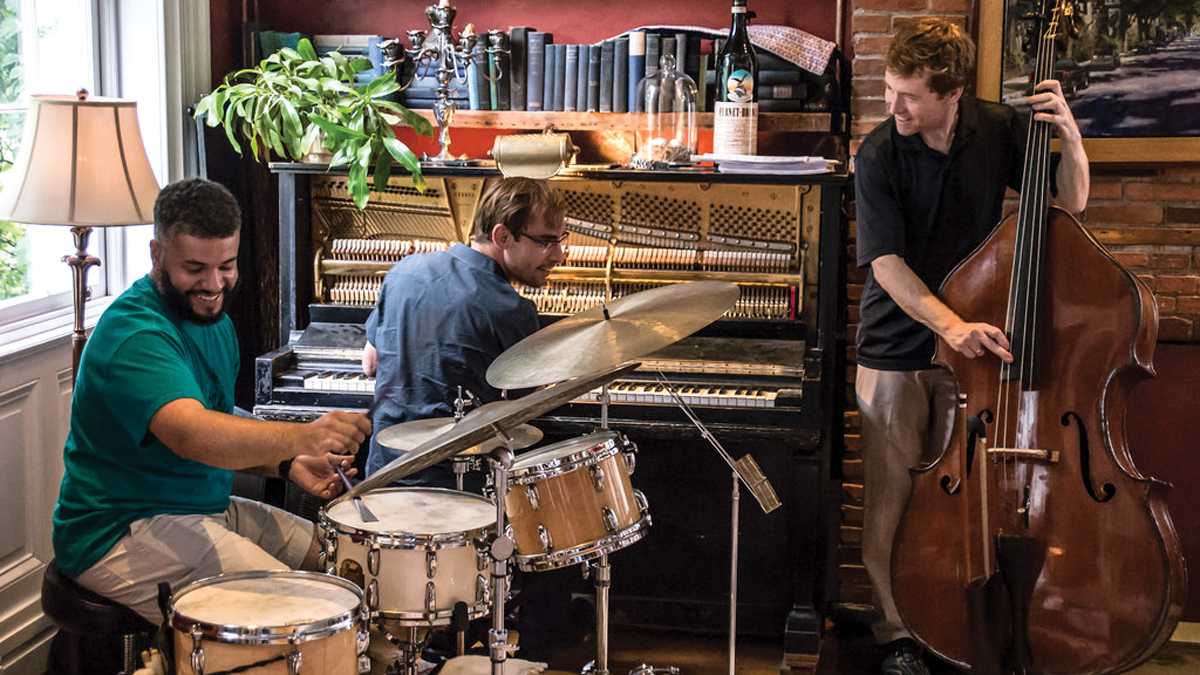 It began with rejection. Three Ithaca college faculty members in the Department of Music founded a jazz trio in 2014 and wanted an outlet to play at regularly in town to escape from their academic setting. Associate professor Nicholas Walker said the trio was drawn to the Argos Inn, located on East State Street.

“We liked the vibe in the room,” Walker said. “It’s a classy, relaxed place with a beautiful environment. It’s sort of a grown-up place in a college town. So we approached them and asked if they wanted some live music, and they said no.”

Walker said the inn did not want to draw a large and noisy crowd, but the trio, called i3°, offered to play for free.

“We wanted to see who would come if we just started telling people, and immediately a bunch of people started coming,” Walker said. “So they started to pay us, and pretty soon it took on a life of its own.”

The band, which features Walker on bass, lecturer Greg Evans on drums and then–Ithaca College professor Nick Weiser on piano, started playing nearly every Wednesday night at Argos from 5 to 7 p.m.

Walker said their name, pronounced “13 Degrees,” was based on creating a fun way to write Ithaca trio — “i” for Ithaca, and the “3” combined with a degree symbol for trio.

The trio’s Wednesday night performances at the Argos looked like they might be coming to an end when Weiser was offered a full-time position at SUNY Fredonia as the head of jazz studies in 2017. Weiser said taking the job was one of the hardest decisions of his life.

“I felt plugged in and connected in Ithaca,” Weiser said. “I felt established there.”

After Weiser decided to take the job, the trio was uncertain how often they would be able to play together. A few of the band’s fans, including local musician and Argos regular Jim Scarpulla, decided to help the band record a live album to preserve the memory of Wednesday nights at Argos. The album, which is called “Meet Me at the Argos,” was completely funded by the trio’s fans.

Weiser said he felt honored when Scarpulla and others came up to the trio and offered to record a live album and pay for it themselves.

“It’s always been a dream of mine to record a live album specifically with a jazz trio,” Weiser said. “I think there’s a certain honesty you get in a live album because nothing is ever edited.”

Argos regular William Benson originally had the idea to record the trio live when he heard Weiser was leaving Ithaca, and approached Scarpulla to help finance it.

“Something was happening at the Argos,” Benson said. “Their live performances were not only musically engaging and wonderful … but there’s an interaction with the audience.”

Scarpulla studied jazz piano with Weiser in private lessons during the summers of 2016 and 2017, and he said their relationship is part of the reason he wanted to help the trio.

“He’s a brilliant teacher and player,” Scarpulla said. “The nice thing about all of them is they’re really good people. Sometimes people with that level of brilliance are kind of hard to hang with, but these people are just regular folks.”

Scarpulla, Benson, some other investors and local recording artist Al Grunwell recorded the band live at the Argos from May to July of 2017. Over this time, they recorded over 10 hours of live music that Scarpulla, Benson and the trio sifted through to place in the album.

A few tunes on the album are reimaginings of popular songs the audience already knew, like “Isn’t She Lovely” by Stevie Wonder and a mashup of “Royals” by Lorde with “Poinciana,” originally written by Nat Simon and Buddy Bernier.

Evans said that because the album is a live recording, the band’s playing and the background noise are spontaneous. The band changes in response to the atmosphere, glasses clink and audience members cough, and not all songs are played perfectly. Benson said that this is part of the album’s appeal.

“You hear noises from the bar and cocktail shakers in the background,” Benson said. “It sounds exciting.”

In addition to orchestrating the production of the album, Benson also painted the album’s cover art.

The album released in November 2017 and can purchased at the Argos Inn, GreenStar Co-Op, Angry Moms Records and Sundrees in Trumansburg. It can also be found on Spotify and iTunes. The album has sold approximately 400 copies, and Benson said that they have just about broke even but are expecting more album sales.

Even though Wednesday nights with i3° are over, the original trio still gets together about once a month. Their next performance will be Feb. 18 at the Argos Inn at 5 p.m. Evans and Walker continue to play on Wednesday nights in a different trio called Argos Grove with Gabe Condon, lecturer in the School of Music, on guitar. Evans and Walker had already known Condon, since they are all college faculty, and knew he would be a good fit.

“We’re still there every Wednesday,” Walker said. “The same energy is happening. … It’s a little different, but it’s beautiful.”

Yesterday was a day unlike any other. Myself and hundreds of thousands of people from all over England and the world gathered in Hyde Park, outside Westminster Abbey and in many pubs, homes and venues in the city to celebrate the wedding of Prince William and Catherine Middleton.

All That Jazz royal wedding roundup

The band My Dear Disco is no ordinary funk-rock band, pioneering their own genre of music they call “Dancethink.” Staff Writer Evan Johnson spoke with guitarist Robert Lester about the nature of “Dancethink,” the band members’ musical backgrounds and their vegetable oil-fueled bus. My Dear Disco will play at 9 p.m. April 27 at Castaways.

As a sports writer for local alternative-weekly Gambit, Alex de los Rios ’07 got to follow the New Orleans Saints and the New Orleans Hornets to different stadiums and arenas. Today, he follows something completely different: contemporary brass bands at the heart of the Big Easy. Senior Writer Alexandra Palombo spoke with de los Rios…