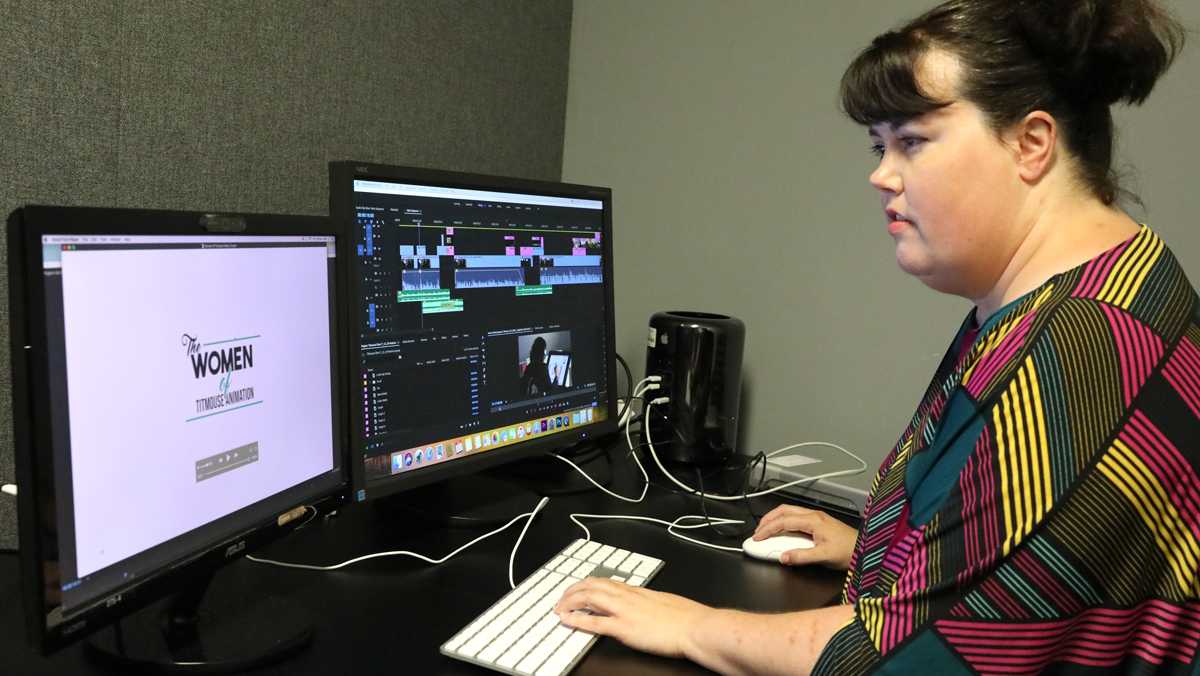 Andrew Treves/The Ithacan
Chrissy Guest, assistant professor in the Department of Media Arts, Sciences, and Studies, has been working on her documentary "Beyond Ink & Paint" for approximately the last five years. The film tells the story of the women who were and are important in the animation industry with the hope of bringing attention to their unappreciated accomplishments.
By Jake Leary — Assistant Life & Culture Editor
Published: September 2, 2018

It’s no secret that the animation industry has historically been a boys club, but that isn’t to say women haven’t made major contributions to the industry — the opposite is true. Thousands of women work in animation, but few of them have the name recognition of Walt Disney or Chuck Jones. Chrissy Guest, assistant professor in the Department of Media Arts, Sciences and Studies, wants to change that with her series “Beyond Ink & Paint: the Women of Animation.”

According to Women in Animation — an organization that supports and spotlights women in the animation industry — although 60 percent of animation students are women, women only hold 23 percent of the upper–level jobs in the animation industry. For the last three years, Guest has been working on a documentary series to spotlight women like Chapman who were hurt by the traditionally male power structures in the industry.

“Beyond Ink & Paint” eight-part documentary series about the past, present and future achievements of women in animation that Guest funded with the help of outside grants and assistance from the Park School of Communication. Guest conceived of the documentary in January 2015, at which point she had only worked on short news videos. The film currently contains over 60 interviews with notable women at animation companies across the country and is still incomplete. The project changed form over the years, eventually expanding from a short film to a feature-length film and finally, as of Summer 2018, to a series.

“As soon as I started shooting, #MeToo happened, and Time’s Up happened,” Guest said. “We were becoming out of date as we were shooting, which is a great problem to have.”

She conceived of “Beyond Ink & Paint” when she arrived at Ithaca College. While working with Jason Harrington, associate professor in the Department of Media Arts, Sciences, and Studies, to create the college’s animation minor, Guest was struck by the lack of research on women in animation.

“I couldn’t really find a lot of publications based solely on women’s contribution to animation — that was both scholarly and in public media,” Guest said. “I think there’s a really great movement now with the #MeToo movement, the Time’s Up movement, for there to be a lot more of an emphasis on behind the scenes contributions that underrepresented populations make.”

Guest is currently deciding between distribution options for the film. She said her goal is for the series to be available for viewers to binge. PBS has expressed interest in picking up the project, but she’s also considering other options like Netflix. She wants the film to be educational, but more importantly, she wants it to spotlight the unsung and influential women, like Chapman, who most people didn’t know about before.

Guest wasn’t alone on the project — she recruited students from the college to help her transcribe interviews and edit the film. One student, senior Talha Demir, edited the majority of the first episode about the history of Titmouse Animation in his free time. Though Demir wasn’t interested in editing and didn’t know much about animation, he learned a lot from his time working on “Beyond Ink & Paint.”

“I learned about the struggles that my female friends are experiencing while working together in the entertainment industry,” Demir said. “And it means a lot to me because I’ve decided to be a filmmaker, I’ve decided to study film, because I wanted to tell stories that need to be brought to light.”

Only one of the eight episodes is complete, and it’s already won an Excellence award from the Broadcast Education Association, an organization that promotes media academics. The series was also accepted into “Breaking the Glass Frame,” a symposium at the University of Southern California about women in animation.

Guest’s interest in animation stretched back to her time working in broadcast television and her time in television was foundational to her understanding of the struggles of equal representation in animation.

“I have always had a love for animation, and, also having worked in the broadcast industry for over a decade, I knew firsthand what it was like for women to be behind the scenes in television,” Guest said. “There was a lot of underrepresentation of women, especially in the director’s seat and just in the creative process.”

The same underrepresentation is present outside of academia. Tracey Miller-Zarneke, one of the producers on the project, noticed a lack of women in leadership roles throughout the industry. Previously she worked as a production manager at Disney.

“There were not a lot of women in creative leadership roles,” Miller-Zarneke said. “Women were mostly the producers and production managers — which is awesome and very important — but some of those folks had gone to art school … but weren’t finding those types of leadership opportunities. … We really want to shine light on the fact that women should be considered equally for these opportunities.”

Correction: The previous version of the article had the incorrect date of the start of “Beyond Ink & Paint” and misphrased the funding of the project and Guest’s knowledge of Brenda Chapman. The first paragraph was also revised to better reflect the status of women in animation.