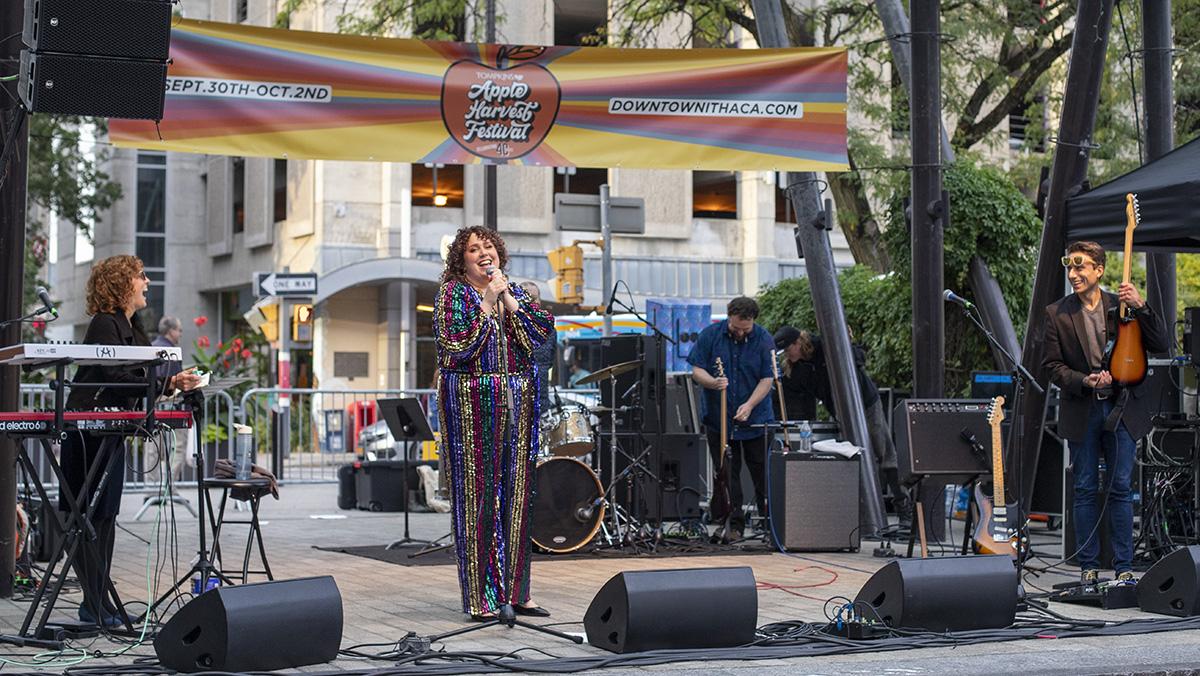 By day, they teach classes on physics and music at Ithaca College. By night, two professors join forces with an Ithaca local singer/songwriter’s band to create and perform music together.

Colleen Countryman, assistant professor in the Department of Physics and Astronomy, and Michael Caporizzo, associate professor in the Department of Music Performance, perform together with Ariel Arbisser, a local singer/songwriter and other local musicians. During the summer, the band went on tour under Arbisser’s name — playing at Heaven Can Wait and Rockwood Music Hall in New York City. The band also performs locally: occasionally at the Ithaca Farmers Market and recently at the Apple Harvest Festival on Oct. 2.

Arbisser said she takes inspiration from musicians like Sara Bareilles, Alice Russell, Kimbra and John Legend. Stylistically, she takes inspiration from older soul, ’90s and 2000s pop music. Arbisser said she uses her songs to talk about her identity as a Jewish, queer woman and empower others with empathy. Arbisser released her debut album, “Risk of Love,” in October 2021 and she said the album is a compilation of thoughts and feelings she had in her twenties. She workshopped her songs for many years and said she is proud of what they have become.

“I can’t remember not having a love for music. I can recall auditioning … and performing in the fourth grade,” Arbisser said. “I was definitely already very focused on being on stage and getting time to sing.”

Arbisser said she likes to create music that encourages conversations about mental health, body neutrality, sex positivity, social and racial justice and LGBTQ+ rights. Arbisser said she loves being an artist because it allows her to express these thoughts in a medium that encourages artists to be weird and loud. She said her only resolution going into 2022 was to live life more artistically.

“Putting away the dishes to think about how that can feel like a more meaningful, beautiful experience, and things like that to bring art to the mundane moments and stuff,” Arbisser said.

After meeting up with the band, Countryman said she felt a connection, and after performing a temporary gig, she decided to stay with the band permanently.

Countryman said she enjoys entertaining and making people happy through music. For Countryman, she said the opportunity to make music was a way to connect her to the community.

“It’s a completely different type of connection that you can make with people that isn’t really verbal,” Countryman said. “It’s like you almost have to be on this same mental wavelength to be able to talk to each other and through music. It’s a lot of fun.”

Aside from her work as an professor, Countryman said that playing in the band is a good way to exercise different parts of the brain. Using both her talent in music and her love of physics, Countryman said she is planning to teach a course, Physics of Music, in Spring 2023 that combines the two.

For Caporizzo, he said his love for music came from his dad, who was a band director. Inspired by artists like Jimmy Page and Led Zeppelin, Caporizzo said he decided to pursue his passion for rock and roll music. While he is trained to play rock on guitar, Caporizzo said he also enjoys playing jazz.

“I discovered rock and roll when I was about 12 or 13, and I decided I wanted to play guitar because I was into Led Zeppelin,” Caporizzo said.

“Take opportunities to collaborate with people and be kind to everyone you meet because you end up with those relationships and creating opportunities for the future,” Caporizzo said. “Music has always been the thing that motivates me and the thing that could always feel fresh and challenging.”

Arbisser said she enjoyed working with Caporizzo and Countryman and that she plans to begin workshopping her next music project with the two.

“They have both been such a delight to work with,” Arbisser said. “They’re so freakin’ talented. It’s wild, and you know Mike brings so much knowledge about music because of what he teaches that I see, and they both just are so committed. They have such intense jobs and still come with so much energy and ideas and enthusiasm. It’s really lovely. I feel really grateful to be working with them.”