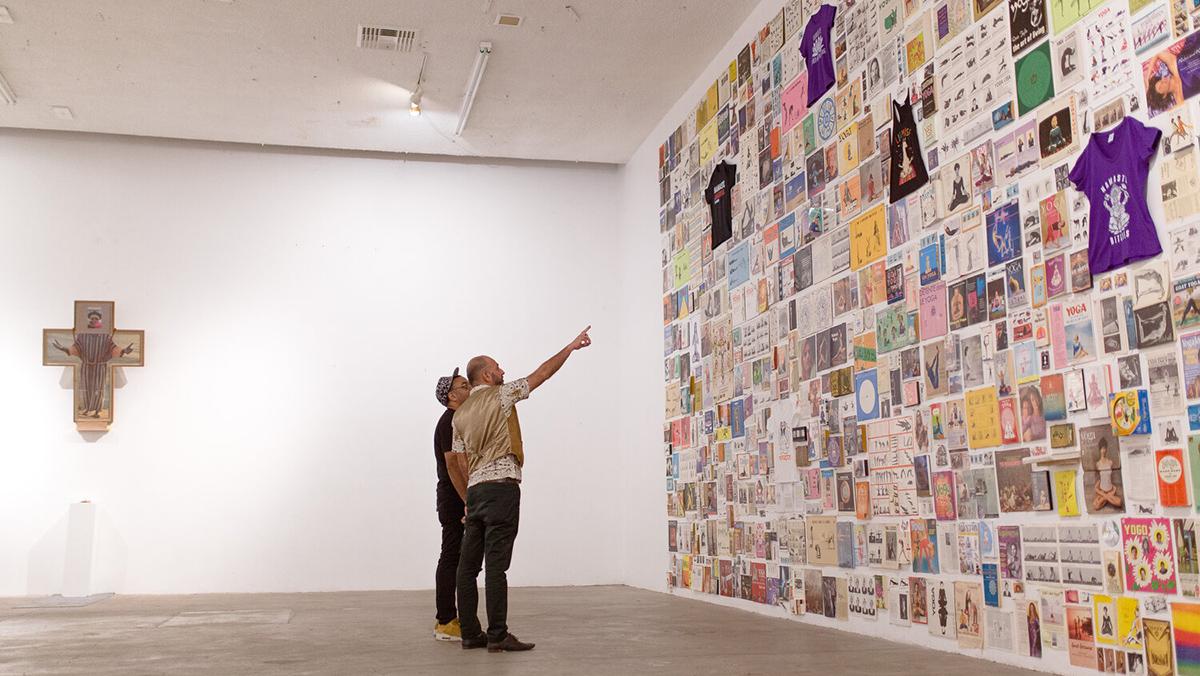 Courtesy of Chiraag Bhakta
"Why You So Negative?" uses magazines, flyers, clothing and more to highlight the whitewashing of yoga in the United States.
By Mike Ross — Life and Culture Editor
Published: April 14, 2022

Since March 24, the Handwerker Gallery has hosted two shows by artist Chiraag Bhakta, “Why You So Negative?” and “Visions and Nightmares.”

Bhakta’s exhibit “Why You So Negative?” dissects the commercialization and commodification of yoga in western culture by showcasing a collection of yoga-related promotional material. Flyers, magazines and other artifacts dating back to the 1950s are used to depict the damage American consumerism inflicted onto such a historically and culturally significant practice throughout history. The collection puts into perspective how commercial institutions use stolen culture for monetary gain.

The second exhibit, “Visions and Nightmares,” chronicles black cultural empowerment through the story of New York rapper Lawrence Parker, better known by his stage name KRS-One. The exhibit highlights Parker’s involvement with the International Society of Krishna Consciousness, or Hare Krishnas, while struggling with homelessness in his teens. “Visions and Nightmares” examines the interactions between the Hare Krishnas, KRS-One and other homeless youth in America at the time in context to the political climate America had seen during the majority of the 1980s under President Ronald Reagan.

Bhakta attended Hartford Art School with a focus in graphic design, which would greatly influence his interest in magazines and flyers present in his work. “Why You So Negative?” was first put on display in 2014 for the Asian Art Museum in San Francisco. The treatment of Bhakta’s work by the museum has played a significant part in its meaning and direction, as the Asian Art Museum initially censored a portion of the work in an effort to prioritize white comfort. Bhakta reflected on his experience with this and other museums in a piece for Mother Jones.

Mike Ross, life and culture editor, spoke with Bhakta regarding his experience curating the exhibits and presenting them to the Ithaca College community.

Mike Ross: How has your experience with the Handwerker Gallery been?

Chiraag Bhakta: It’s been good! The gallery’s director Mara [Baldwin] reached out to me some time in 2021, and it’s just been great since. I got some help with installation from some students and a few people that work there as well.

MR: How long has the collection of promotional artifacts been happening?

CB: I started collecting some of that yoga material when I moved from New York to the West Coast in 2007. That was a time when yoga was becoming really big in pop culture and the bay area was like the epicenter of westernized white yoga. I started picking up material that was funny to me or interesting to me.

MR: How has the general public reacted to your work?

CB: A big part of that exhibit was the Mother Jones piece I wrote, that got shared pretty far. I got a great response, obviously a lot of people are gonna be against it or won’t be very understanding, but it was great to get it out and see who is affected by it or who feels they’ve had similar experiences. It was great to open a few eyes to how these institutions work and who they aim to benefit.

MR: What was your experience during the artist talk in Handwerker like?

CB: It was great to see people come out. I spoke the day the exhibit was first shown as well, a couple classes from different departments came, it was great to have students there who were really engaged and asked a lot of questions.

MR: What would you like the main takeaway of your work to be?

CB: For the most part, I think people should just check it out and take away whatever they can. “Why You So Negative?” and “Visions and Nightmares” are two very different shows with a lot of overlap. You can go to the site and read an essay with a shirt or tote bag, zine or sticker that goes along with it, rather than just going and getting the white wall experience, and hopefully people can go and see the connections between the two exhibits. I think it’s interesting to see how both shows use spirituality and religion in different ways, there’s a lot of connections in how things are commodified and commercialized.