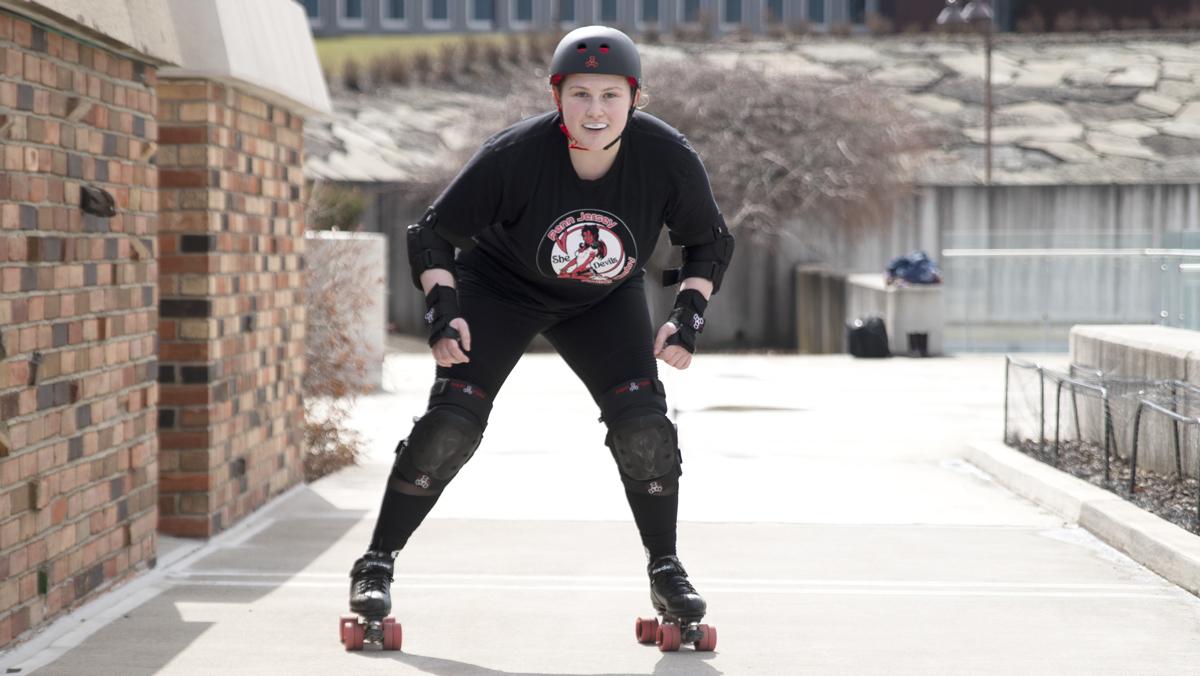 Tenzin Namgyel/The Ithacan
Freshman Harleigh Myerovich joined the Ithaca League of Women Rollers this semester. She is being trained to be a non-skating official and with eventually learn to compete in bouts.
By Olivia King — Contributing Writer
Published: March 19, 2019

During Women’s History Month in March, many brave women and their struggles, victories and histories are remembered. Roller derby, a sport tied to third–wave feminism, celebrates women stepping out of traditional roles.

Contributing writer Olivia King spoke with Myerovich about roller derby, the Ithaca League of Women Rollers, her experiences with roller derby in the past and learning to become part of the league as an official.

Olivia King: How did you learn about the roller derby and how did you get involved?

Harleigh Myerovich: So, I’m from [Philadelphia] originally. My mom had found the Penn Jersey Roller Derby team, the She Devils, were bouting in a warehouse really near where we live. We started going to their bouts, and I love watching them and I thought it was so cool. And I went home and really wanted to get involved with the She Devils, but I was about to leave for college. So, I looked up if there was anything in Ithaca and found Ithaca League of Women Rollers. This semester, I reached out and asked if they had fresh meat training, and they didn’t. But [a member of the team] who has been coaching me offered to have me come to open laps practices on Sundays. So, I’ve been skating for seven or eight weeks now. I just joined the league, not on a team, though — I’m not quite ready to start bouting. But I joined the league, and I’m going to learn to be a nonskating official so that I can attend league meetings and potentially start to run bouts.

OK: What makes it special to you?

HM: Oh my gosh, almost everything. I’ve really enjoyed meeting so many wonderful people through it that I would have never normally met. I love skating, I’ve learned. It’s been a while since I’ve been completely new at something, so that’s been really cool to work really hard at something and see my practice paying off with a fantastic group of people who are supportive and encouraging and really cool to be around. I think it’s a great environment all around, and I think it’s improved every aspect of my life if I’m being honest. It’s great to be a badass bitch on Sunday.

OK: In many sports, it is thought that men’s teams get more attention than women’s teams. Do you feel this true for the roller derby?

HM: No, I don’t think so. I think when people picture it, they definitely picture women’s teams. But I’ve definitely seen men’s roller derby teams bout. There’s a team that would often bout with the She Devils, the Hooligans, the Philly men’s team. It is super fun to watch; I highly recommend it. But I’ve definitely had people ask me if there are men’s teams. I think that’s a lot to do with roller derby popularity in the ’70s and ’80s when it would be broadcast with women’s wrestling for the first time. People view it as a women’s sport, which I think is really cool. It makes it a really unique space to get involved with. I think it’s wonderful.

OK: How does roller derby empower you?

HM: Learning something new is always empowering, I think. I’m no great athlete. I have a dance background, I swam, but I never really consistently stuck with something. I’ve never viewed myself as a terribly athletic person. So to learn something new and not be half bad at it, it has been really empowering. To start to be able to do these things I’m seeing other people master … and being around empowered people who are encouraging me is really a really beautiful environment and energy to be around.

OK: Roller derbies initially faced criticism for allowing women to step into less traditional roles, and many people said it was too violent. Do you think those criticisms are still around today?

HM: When I tell people I’ve started roller derby, and I get either a ‘Wow that’s so cool!’ or a ‘Wow, are you going to die?’ At the bouts, I’ve seen people injure themselves, but it’s not [World Wrestling Entertainment] like people think it is. Most things that would really hurt you are probably a foul. It’s kick-ass and difficult and a contact sport for sure, but … there’s that perception, and I think it’s hysterical. It’s not the barbaric, Viking-like activity that some people have in their heads.

OK: Roller derbies are often tied in with third–wave feminism. Do you think feminist ideals exist in the roller derby?

HM: It’s a group of women running their own league, which is an empowering thing. I do feel pretty badass when I’m listening to ‘Boys Wanna Be Her’ by Peaches and skating around really fast. That feels like a feminist moment. I don’t know if that’s reductive, but I would recommend it. There are these small moments when I’m like, ‘Oh, I’m really powerful, and so is everyone else on this track and we’re all building each other up.’ I feel like that support of other women and collaboration between other women — that’s pretty feminist if you ask me.

IC alumni and professor skate together in roller derby

Hidden in a small elementary school gym, four men put their feet in roller skates and tighten their worn laces. The pads are next; knee followed by elbow, then wrist.