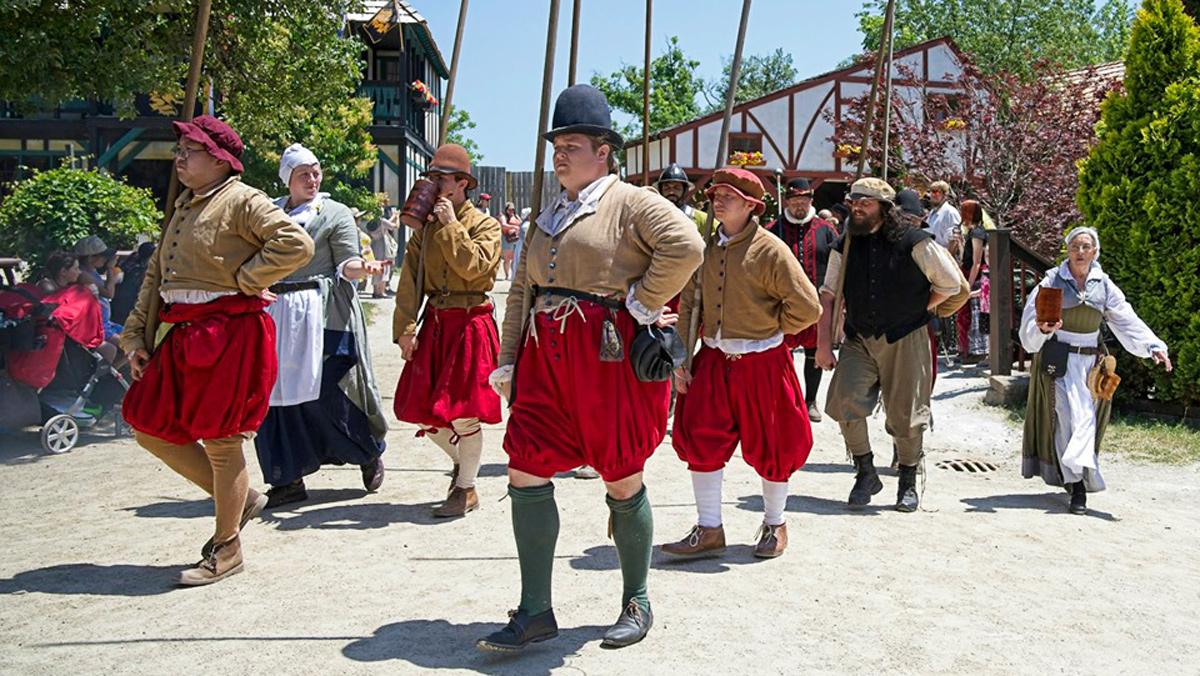 Courtesy of Wayne Hile
Third from left, sophomore Daniel Igoe marches at The Bristol Renaissance Faire in Bristol, Wisconsin, with a group of other costume-clad workers. Igoe began working with the fair two years ago and said he found a community through it.
By Olivia King — Staff Writer
Published: August 28, 2019

History has the potential to be highly interactive and relatable given the right circumstances — Renaissance fairs are one way to bring history to life. Fairs often combine crafting, costuming and performance to put an entertaining spin on learning about the lives of people from long ago.

Daniel Igoe, sophomore history major at Ithaca College, regularly participates in Renaissance fairs. Igoe said that through fairs, he is able to connect with the past by stepping into the life of a character who is based on history.

Staff writer Olivia King spoke to Igoe about his experience with Renaissance fairs.

Olivia King: Could you start by giving some background information on Renaissance fairs?

Daniel Igoe: Of course. I can’t speak on Renaissance fairs as a whole, but the one that I work in Bristol, Wisconsin. It is a place with a lot of different casts doing a lot of different things. But in general, we are recreating … Bristol, England, 1574, which is when the queen was visiting there. [We give] people a door into what life was like in that time.

OK: Can you talk about your job at the Renaissance fairs?

DI: I play a character whose name is Neil Agrippa. He is a member of the Trayn’d Bandes of Bristol. These were historical militia groups formed by the queen in the 1570s in response to conflicts among the continents. I portray someone who was in one of those bands and would have been middle class — relatively wealthy but not in the aristocracy. So what I do is portray that, teach about military technology at the time and what it was like to be in middle class during that time and how it reflects our society with how it is different and the same.

OK: How did you get started doing Renaissance fairs?

OK: Does your participation in Renaissance fairs go hand in hand with your major, or is it more of a hobby?

DI: There is overlap in how I think about history through the fair and how I think about it through my scholarship. At the end of the day, a historian’s job is to inform the public about what history was like. A large part of that is getting inside the head of how people thought at that time. A large part of our goal at the Renaissance fair and the Trayn’d Bandes is portraying that in a real and tangible sense. So, it is a different approach to teaching history, but it is not separate in any way: They both share the same goal.

OK: Are Renaissance fairs a good way to get students excited about the history they may be learning about in classes?

DI: Yes, it’s a good window into the time because it’s very hands-on. It’s a good way to get your hands on what people were using at that time. The group that I’m in has a whole set of weapons and armor. People can get their hands on these things and try them on and feel what it was like at that time. When you have that interest, it makes it easier to ask more about that time and even know what questions to ask.

OK: Have you built a community around [fairs]?

DI: Yes, absolutely. These fairs are magnets for people who would otherwise be on the fringes of other communities. They tend to form very tight-knit, almost familial groups. It has been my experience that you have these insular communities that are very productive and healthy. A community of learners is what it is. They’re very excellent communities to be a part of.