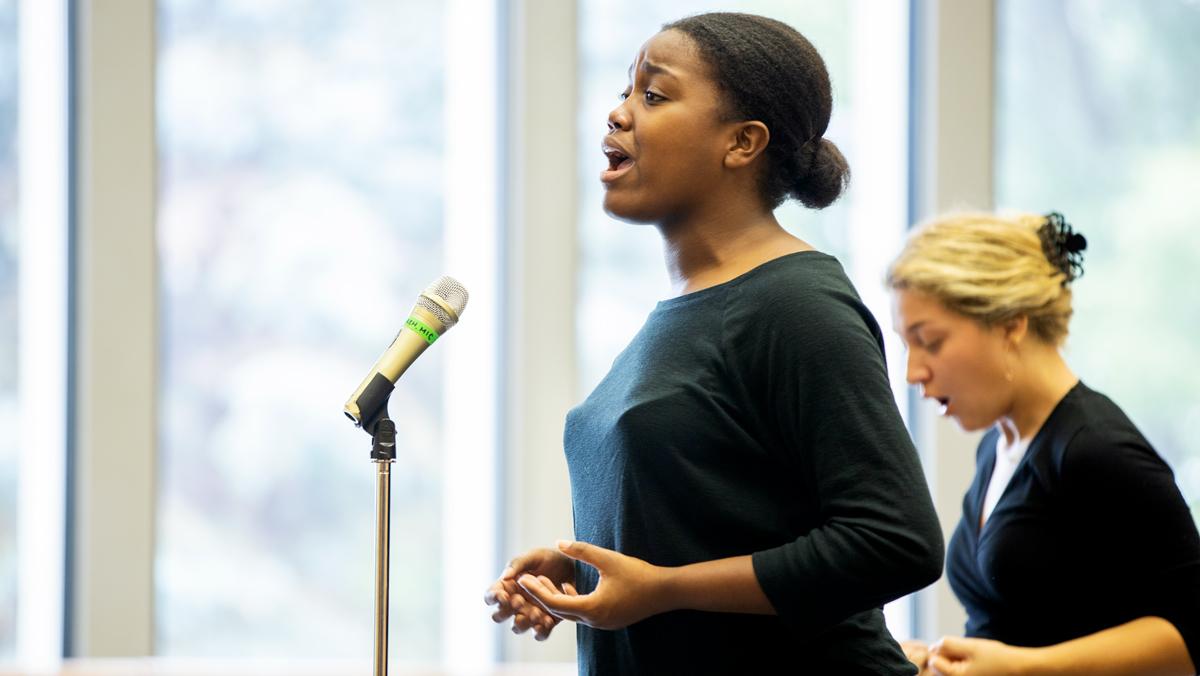 Reed Freeman/The Ithacan
Junior Courtney Long practices at rehearsal for “Sister Act” on Sept. 14. Long became interested in theater in high school when she was casted in “Aida.”
By Noah Pincus
Published: December 11, 2019

Ithaca College is known for its respected Department of Theatre Arts, and the students who participate in its shows are known to be extremely dedicated to their craft. One of these students is junior Courtney Long. Long’s most recent role at the college was as Deloris Van Cartier in the mainstage musical “Sister Act,” a show based on the 1992 film of the same name.

Long got her start with theater in high school and has dedicated herself to fostering a reputation within the industry so she can pursue a career after graduation. Long said theater helped her discover her confidence and realize her strengths.

Staff writer Noah Pincus spoke to Long about her plans for the future, her history in theater and what theater means to her.

Noah Pincus: When did you first start getting involved in theater?

Courtney Long: It was a show that I had done in high school called “Aida.” I was never into theater when I was really young. I started singing in church when I was about three years old. I had my heart set out to be a singer. … When I went to high school, I auditioned for “Aida,” which was about a Nubian princess falling in love with an Egyptian man. … I didn’t have high hopes of getting any roles in the show. I just auditioned hoping to be at least the ensemble, but I got a call back for the lead role as Aida. That show changed my life. It changed my perspective of who I am as a person today. If it wasn’t for my directors in school, I don’t even think I would be in Ithaca today. It made me more humble, more confident in myself. Aida was such a powerful human being, and it made me realize this is what I want to do for the rest of my life.

NP: How were you able to transfer the confidence of Aida into your personal life?

CL: When I came to Ithaca after doing the show, it allowed me to open up more. It allowed me to have a voice. I was able to look in the mirror and say, “I deserve to be here.”

NP: Would you say you have a love-hate relationship with performing?

CL: Well first, I love, love, love performing, that’s my number one thing, but there’s times where I walk out and think to myself, “I sound terrible.” Most of that is insecurity and me being hard on myself. When it comes to performing, I’m a perfectionist, so I’m really hard on myself, and I want to get the job done.

NP: How do you believe your performances inspire others?

CL: I was in a show recently called “Sister Act.” I played Deloris Van Cartier, who is the lead role in the show, and my high school came to see it. It was so amazing to see these young kids applying to colleges asking me questions. The fact that I was a mentor to them just brought joy to my face. It made me so happy to see these kids walked out and felt good about the show. They felt good about themselves, and it inspired them to keep pushing, and fighting and being great at what they’re doing. … So many of them told me the show changed their lives. I was so happy, it just made me want to keep performing.

NP: What do you plan on doing with your acting career in the future?

CL: My goal is to hopefully be on a Broadway show or on a film. If I can be on stage with many other talented people who have a name for themselves, it would mean the world to me. And doing what I love for eight shows a week would be amazing.