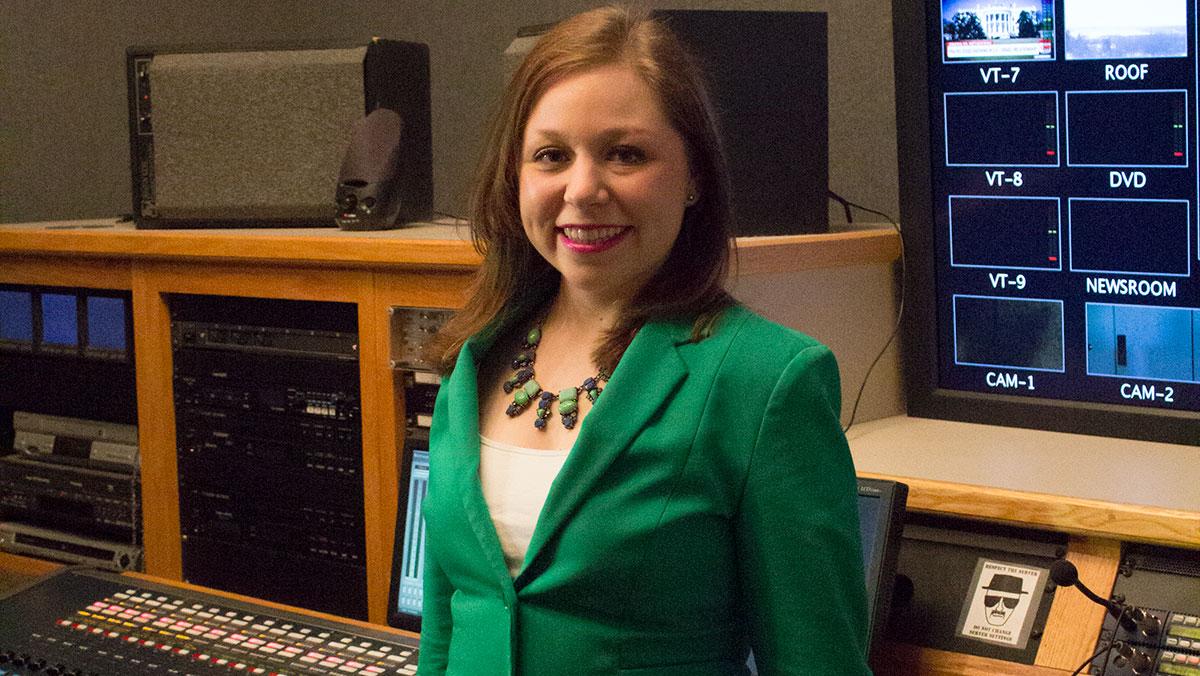 Kellie Hodson/the ithacan
Senior Mary Kielar runs the blog “Eat and Be Mary,” and has an ICTV segment of the same name.
By Kim Joyce — Contributing Writer
Published: March 3, 2015

Senior journalism major Mary Kielar started her food blog “Eat and be Mary” last summer to share her favorite healthy eating alternatives and motivation to live a healthy lifestyle with readers. Last fall, Kielar was given the chance to make “Eat and be Mary” a segment on ICTV’s Newswatch 16, bringing the blog to life. The blog features a range of things from fitness motivation to music, and of course a number of healthy recipes Kielar has tried herself.

Contributing Writer Kim Joyce spoke with Kielar about what inspired her to start the blog, healthy eating and what food means to her.

Kim Joyce: Why did you start “Eat and be Mary”?

Mary Kielar: It was June of this past summer, and I had just gotten back from studying abroad. I had eaten my way through all of Europe and it was great, but I came home and I felt like a whale. I’ve always been a very careful eater, but I also love food so I started thinking [starting a blog] would be a really fun thing to do. I got a Pinterest and started following the clean-eating pages there and started looking at heath blogs and Instagrams. And it was kind of just born out of that. One day when I had a day off from my internship and I was like, “You know what, I’m gonna do this.”

KJ: How has food and healthy eating affected your life?

MK: It gave me a lot of confidence because I had so much control over everything. I was in Pennsylvania when I started this. I’m originally from Rochester [New York], but I was interning in Philadelphia at the time, so I was living with my Aunt and Uncle and I had a lot of time to myself and a lot of time to experiment. I was always in their kitchen doing stuff like experimenting with healthy ingredients and all that jazz. It really gave me a big sense of confidence, going into work every day. I’d feel really good, I’d be energetic — and I’m always energetic — but I felt that extra oomph. It’s really helped, and it just sort of goes through every aspect of your life.

KJ: How has having “Eat and be Mary” on Newswatch been different from writing your blog?

MK: It’s like bringing the blog to life. It’s really nice to talk about it and get out in another way. It’s a way to be a little more active on social media. I already tweet out and have a Facebook page and have a Twitter for my blog, but it’s also nice to just talk. It’s just a cool thing that I was given the opportunity to do. One of my friends was like, “You should really do something with that,” and at the time I didn’t think it was something that they could just quickly put into motion, but it’s been very rewarding and people are liking it, so I’m hoping it’ll be in my career at some point too.

KJ: Where do you hope to go with “Eat and be Mary” after graduation?

MK: Well I’m going to definitely keep [the blog], keep going with it. I think that if I were given the opportunity to do something like I do on “Eat and be Mary” like on ICTV, if I were given that option to like have a feature on TV, on a network, that would be amazing, in addition to being a general assignment reporter. It’s something that I think is very marketable and something that I really do enjoy. It’s like my little niche within journalism that I really enjoy, so I’m hoping I can blend all that and hopefully still travel.

KJ: What sort of feedback have you gotten for the blog?

MK: The people who read it all seem to generally like it. One of the best moments was probably when one of my friends, who graduated two years ago now, texted me and she said, “I was having a really slow day and I was really craving a lot of things, and I went right to your blog, and the cookies that are a healthier option, that you make with avocados instead of butter, are right there, and I made them and I made a healthy choice, and you saved me from doing this.” And that was really rewarding because it’s nice to be able to help people, even if it’s indirectly.

KJ: Do you have anything else to add?

MK: Starting the blog made me realize what I could do if I just wanted to do it. Everything else has happened in my life because I make it happen, and I really wanted to do something that would affect people outside of journalism. I wanted it to be something people enjoy reading and I enjoy doing. It’s helped me to create this kind of brand I guess, which I really like and as long as I keep it up I think I can do some big things with it.