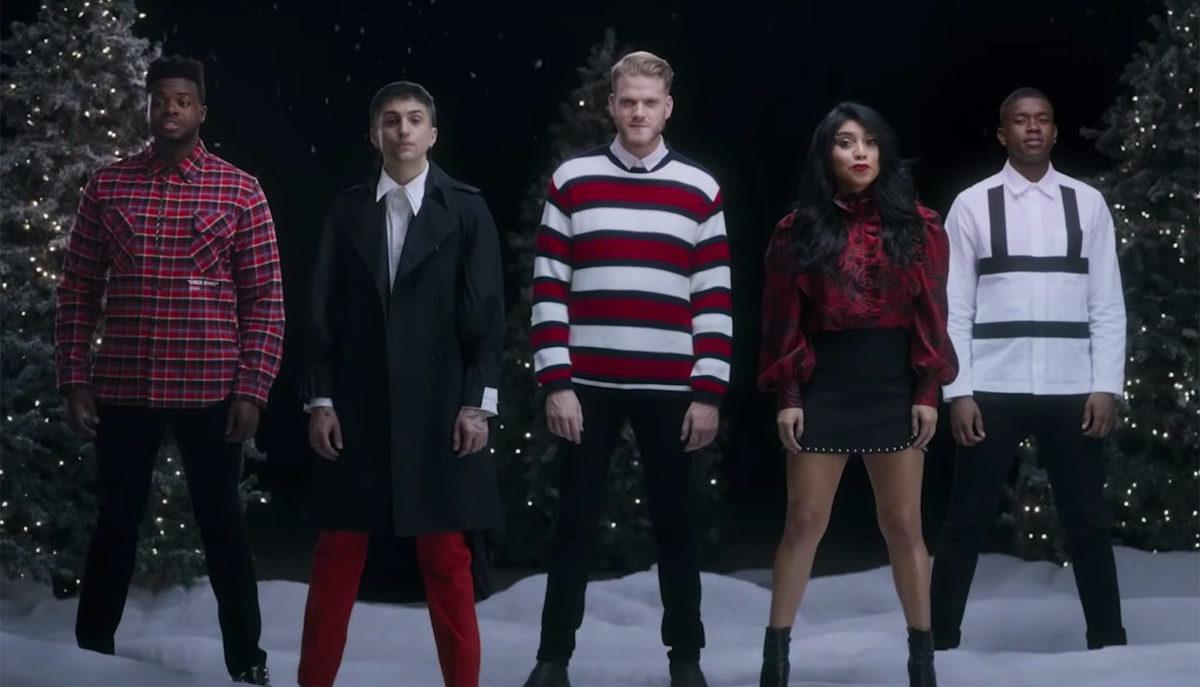 The tightly strung harmonies and bursts of jolly energy in Pentatonix’s “Christmas Is Here!” makes the a cappella group’s third holiday season–themed album a delight.

“Christmas Is Here!” follows the likes of “A Pentatonix Christmas” from 2016 and “That’s Christmas to Me” from 2014, both of which acquired positive reviews and popular acclaim. “Christmas Is Here!” will fare no differently. Though this year’s lineup may follow the group’s conventional musical style, the album contains the merriness and brightness any listener expects from a Christmas album.

“Christmas Is Here!” opens with an upbeat pop-style cover of Stevie Wonder’s “What Christmas Means To Me.” The group, which consists of Scott Hoying, Mitch Grassi, Kirstin Maldonado, Kevin Olusola and 2017 newcomer Matt Sallee, showcases its strong and catchy vocals immediately. This infectious atmosphere is also present in the classic “Here Comes Santa Claus,” in which Olusola’s forceful beatboxing blends with the rest of the group’s nuanced a cappella background. Olusola’s beat also drives “Rockin’ Around the Christmas Tree,” transforming another holiday classic through his and the group’s powerhouse melodies.

Slowing down the beat of the album is “Grown-Up Christmas List (feat. Kelly Clarkson).” Pentatonix harmonizes and beatboxes the background of this song only, letting Clarkson shine as the soloist. The song is electrifying yet subtle, the result of Clarkson’s still–powerful resonance. “Where Are You Christmas?” has a similar energy to “Grown-Up Christmas List,” this time highlighting each of the group’s members. Maldonado’s solo and background vocals glow, and she leads the group’s procession through “Where Are You Christmas?” Both songs are demonstrative of the group’s sound structure and foundation, and its seemingly effortless production of both songs, like most others on this album, is enchanting and masterly.

The album takes some creative leaps, beginning with “Sweater Weather,” the not-so-Christmas song on this holiday album. “Sweater Weather” itself does not necessarily equate to Christmastime, and the song stands out as the only nonholiday–oriented tune. It is nonetheless executed with precision — listening to it doesn’t hurt, and the one slight blip doesn’t take too large a toll on the album. However, the group’s experimentation with “Making Christmas” from “The Nightmare Before Christmas” is surprisingly entertaining and somehow haunting. The group’s soaring vocals have an evocative echo in the song, and one member laughs wickedly as an accompanying theme throughout it.

Closing the album is the sped-up “Jingle Bells,” the only song accompanied by actual instruments. Perhaps the strongest song, “Jingle Bells” is effectively the most joyful and jolly of the album, likely the result of the superspeed chorus and, as usual, the group’s laudable metamorphosis of each classically Christmas song on the album. The album is most notable for that quality and for its incredibly talented group. Pentatonix’s work on “Christmas Is Here!” should be, like its other Christmas albums, well–received this holiday season. Any Spotify Christmas playlist would be incomplete without the group’s elegant melodies.

A single beat starts from silence, a tenor voice comes in with a sort of sweet sadness.