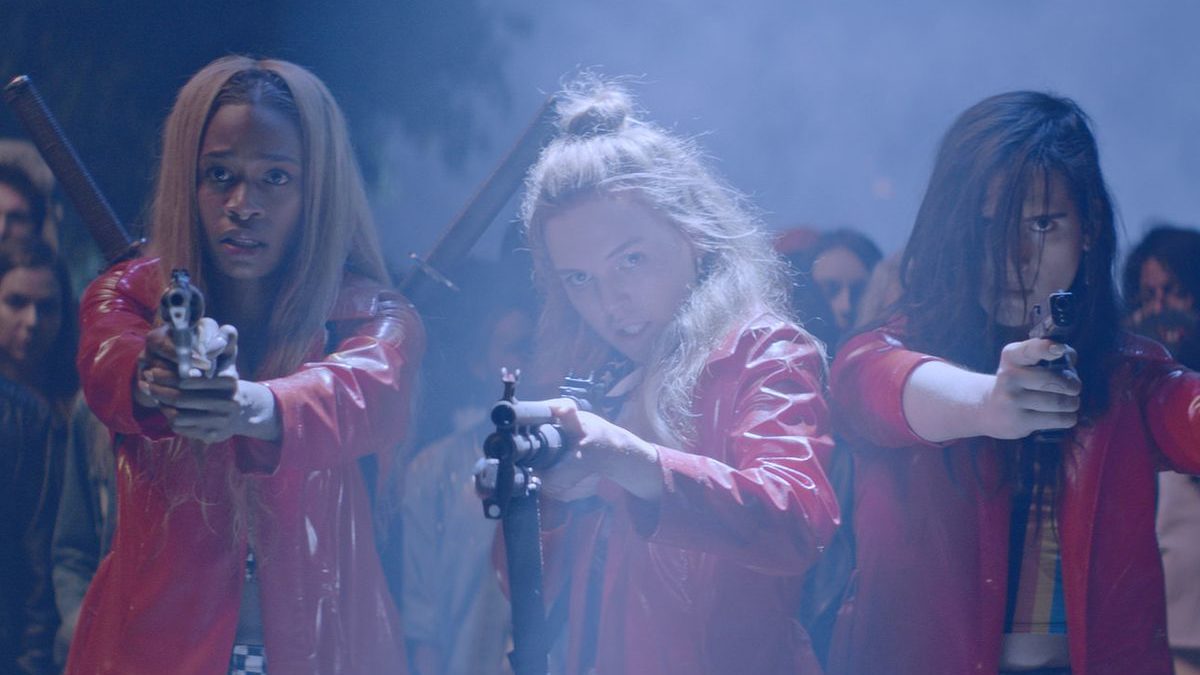 Elevation Pictures
"Assassination Nation" takes the violent doomsday premise of "The Purge" and sets it in the small town of Salem, Massachusetts.
By Jake Leary — Staff Writer
Published: September 25, 2018

“This is the hundred percent true story of how my town, Salem, lost its motherf—ing mind,” Lily (Odessa Young) says in the opening scene of Sam Levinson’s “Assassination Nation.”

It’s not a true story, but the film is founded on an unpleasant truth — in terrible situations, people will do terrible things. And that’s exactly what happens when everyone in Salem, Massachusetts, gets hacked. Thousands of private texts, nudes and search histories are made available for anyone to see. Lily and her friends Bex (Hari Nef), Em (Abra) and Sarah (Suki Waterhouse) are the suspected hackers and bring the wrath of an entire town down upon them.

Levinson rehashes the same ideas over and over. He spends copious amounts of time on red, white and blue-lit parties that neither develop the characters nor move the plot forward. This downtime with Lily and her friends should give viewers insight into her personality, but because the protagonists are shallow caricatures, viewers get nothing out of the extra time spent with them.

The four friends begin to blur together — their identical traits, speaking styles and clothing choices making them indistinguishable from one another. Characters don’t talk to one another, they more so monologue about the state of sexuality or politics or high school life. This makes the film feel more like a political rant than a coherent story. The only reason Lily stands out is because she’s the viewpoint character, and we spend more time with her than the others. As a result, it’s difficult to care when the characters are in peril, and it’s even harder to invest in when they’re empowered. But in a movie that’s about empowerment, that wants viewers to feel exhilarated when the heroines start fighting back, it’s a problem when their empowerment feels like defeat.

There are natural comparisons between “Assassination Nation” and “The Purge.” Both films are about average citizens turned murderous, are blatantly political and revel in ruthless, endless violence. But where there’s hope in “The Purge” — hope that the Purge, and the violence that comes with, it will end — there’s none in “Assassination Nation.” The film’s ending implies a perpetuation of violence, an endless misery for Salem and the country at large. The final shot of the four girls wearing matching red coats, cocking their weapons with determination in their eyes, is supposed to be empowering. It’s supposed to represent the women of America finally standing up to the monsters that repress them. But instead, it feels like another defeat — like the four characters we spent two hours rooting for are lost to the same murderous madness that overtook their town.

“Assassination Nation” makes a compelling political statement but gets bogged down by incoherent storytelling and mean-spirited violence. It’s an unpleasant movie that successfully tells the story Levinson set out to make, but that narrative is too grotesque and cruel to enjoy.

Review: ‘The Predator’ fails to live up to predecessor