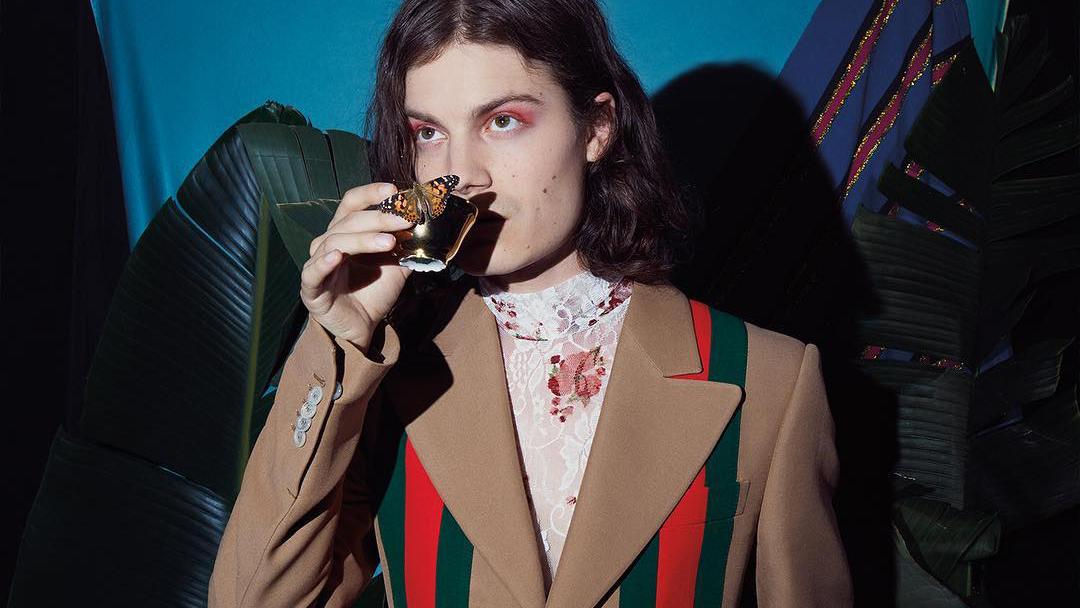 Interscope Records
"Blue Madonna" is the newest album from indie artist Børns. His usual heavy guitar and percussion are replaced by softer instrumentals and vocals, leading to songs that are both strong and delicate.
By Noa Covell — Staff Writer
Published: January 23, 2018

Indie pop artist Børns has gotten back in the studio after previously releasing hit songs that reached Billboard’s Top Alternative and Top 200 Charts. The small–town artist from Grand Haven, Michigan, has become a worldwide hit who’s had his songs called “instant classics” by Taylor Swift. His new album, “Blue Madonna,” brought back his authentic alternative vibes that fans love and crave. “Blue Madonna” is an original album that shows listeners a new, vulnerable side to Børns’ music, as well as his growing progression as an artist.

Dropping on Jan. 12, Børns’ new album contains a collaboration with Lana Del Rey in the song “God Save Our Young Blood,” and a brief, minute-long interlude called “Tension” in the middle of the album to serve as a break. These elements were not seen in his previous works and are clear signs that Børns has made strides towards enhancing his music.

Børns added in original vocals that mixed nicely with his familiar, old sounds and the new synthetic electronic sounds. Straying away from his typical prominent guitar and percussion that most of his other songs feature heavily, Børns instead introduced soft, nostalgic vocals. Taking a chance on “Blue Madonna” by experimenting with different sounds on tracks like “Iceberg,” “I Don’t Want U Back” and “Second Night of Summer” and using a softer, more vulnerable sound ultimately worked well. The slower tempo mixed with a gentle vocal track floating on top made for a perfectly strong yet delicate song to listen to daily.

However, the album does lack depth in the choices of some lyrics. The sound and authenticity of each track are outstanding, but the lyrics from song to song are dull. In the song “We Don’t Care,” the lyrics are blunt, too straightforward and seem forced. Børns could have chosen better lyrics that would have made the song more exotic and captivating. However, he failed to do so and settled for less. “I Dont Want U Back” is intricate and thoughtful with authentic sound, but it lacks complex lyrics.

While “Blue Madonna” isn’t perfect, the 12 varying tracks bring a refreshing alternative sound showing Børns’ softer, more sensitive side. Songs that start out slow and relaxed then pick up around the middle create variation and give the album a wholesome feeling overall. The necessary variation in tempo, syncopation and mood from track to track plays a vital role in keeping listeners on their toes and continuously interested. Back and more indie than ever, Børns was able to keep listeners hooked with each head bob–inducing track.

The release of “Blue Madonna” was a giant step up from his past album, “Dopamine,” and first EP “A Dream Between.” This time around, Børns focused on utilizing his vocals with a downgrade in the typical intense guitar and percussion tracks.

Børns brings “Blue Madonna” to an end with a song titled “Bye-Bye Darling.” Hopefully this literal ending to the album won’t be a final goodbye from the artist and the public will see more great works of his to come.

In the wake of a harshly received “Saturday Night Live” performance, songstress Lana Del Rey has emerged as a bizarre, experimental artist. While the vocals on her latest album, “Born To Die,” are pleasing to the ear, the lyrical components lack a real depth across the work as a whole. A number of songs follow…