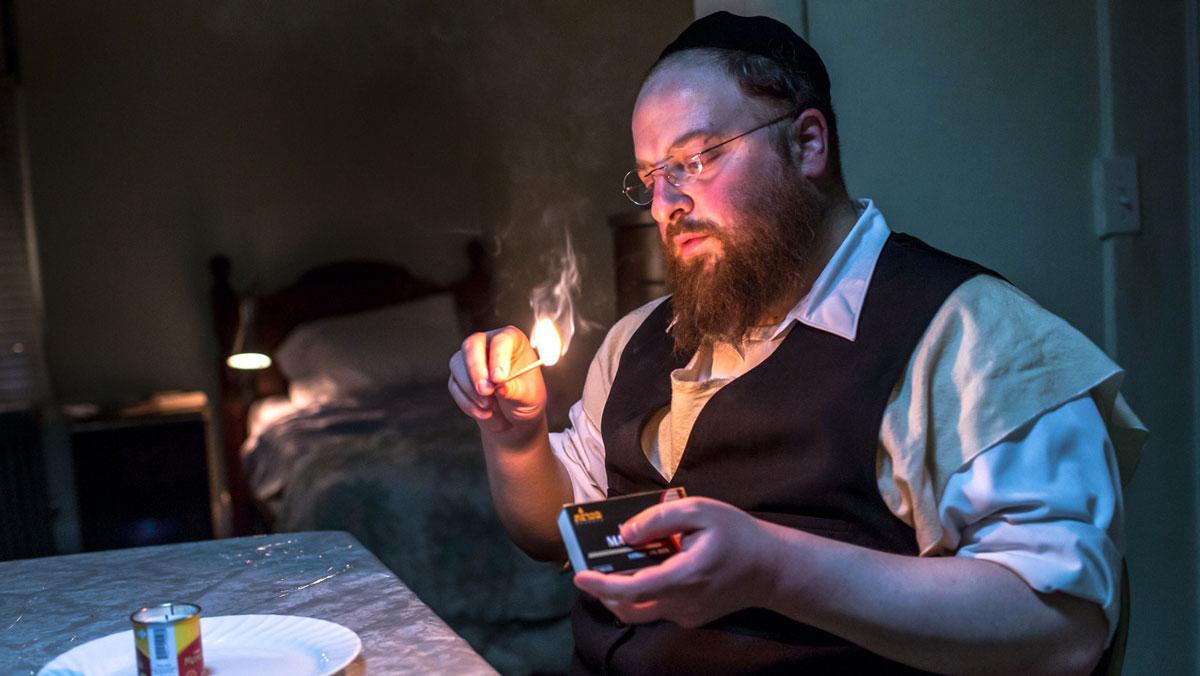 A24
“Menashe” is an intimate drama about life in a Hasidic Brooklyn community. The film centers around Menashe (Menashe Lustig) as he tries to regain custody of his son, Rieven, (Ruben Niborski) and push the boundries of his faith.
By Taylor Millican — Contributing Writer
Published: September 25, 2017

The words “There’s nothing orthodox about him” are emblazoned across every poster for “Menashe.” It’s a tagline that would pair better with a quirky comedy or an upbeat, low–stakes drama. While Joshua Weinstein’s debut fiction film wears a light-hearted slogan on its sleeve, “Menashe” is a serious, beautiful exploration of the bounds of love and conventionality.

The film follows the life of Menashe (Menashe Lustig), a widowed, Hasidic Jew living in Brooklyn, New York. One of the trademarks of this religion is its men’s appearance. Traditionally, they sport a long beard, long strands of hair hanging from their temples, a dark suit and a large top hat called a shtreimel. But, Menashe doesn’t fit in. His beard isn’t as long as the beards of the men around him. He prefers to tuck his hair back behind his ears. He ditches the suit jacket and the hat.

The film details his struggle to regain custody of his young son, Rieven (Ruben Niborski). Because Hasidism forbids a man to raise a child without a wife, until Menashe remarries, Rieven is to live with his uncle Eizik. Further complicating this matter, Menashe pushes against the conservative tradition of his faith.

At many points, the movie seems far more like a documentary than fiction. Multifaceted characters, grounded dialogue and minimalist cinematography create an intimate, realistic experience. Lustig is not a professional actor, along with the majority of the people seen on the screen at his side. He is truly a Hasidic Jew who has faced some of the same struggles as his character. This combination allows for an endearing, quiet depiction of what is usually portrayed as an abstract reality.

The language adds to the grounded nature of the film. Aside from a few remarks in English and Spanish sprinkled throughout the film, the entirety of the piece is in Yiddish. This, along with the subtle choices made regarding the film’s cinematography, create a near first–person point-of-view. It’s almost as if the viewer is sitting beside Menashe as he interacts with his son.

It’s no surprise that this fictional work came out so lifelike since Weinstein has a lengthy background in documentary filmmaking. On this project, Weinstein put his experience to good use, acting as writer, cinematographer and director. Modern media places such emphasis on creating a realism that this blend of documentary and fictional work seems to be inevitable. Fictional pieces, the best of them, at least, work to elicit emotion out of their audience. Often in cases of realistic fiction, there is a disconnect between the screen and reality. Fusing a documentary approach with a fiction film can offset this, creating a stronger link between the viewer and the motion picture.

The film develops the relationships at a downtempo pace. This endows the film with plenty of breathing room to come into its own alongside the characters it depicts. The audience will inevitably find itself rooting for Menashe and his son as they struggle to secure an emotional relationship. In the mundane moments of moving boxes at Menashe’s job or enjoying a day at the park, the clumsiness of Menashe and Rieven’s bond is exposed. One of the most telling instances of their imperfections comes with the death of a young chick. Menashe gifts his son with the chick early on in the film, and the two of them work together to care for it. However, in Rieven’s absence, Menashe is unable to keep the bird alive. Obviously a metaphor for his failure, the image of the dead chick in a cardboard box is especially impactful to Menashe, calling him to action.

The harsh laws of Hasidism are a compelling conflict for the protagonist. Although Menashe resists following the strict tenets set in place by his faith, this is not a story about rejecting tradition or uprooting customs. Instead, this is a piece about finding your place within such boundaries. In order to be with his son, Menashe is forced to reconsider what laws and traditions he will comply with and which he will defy.

The film’s brilliance stretches beyond the screen. Representation is more important than ever in this world of media. Delicately and truthfully bringing to life such an invisible portion of the population not only prompts audience members to educate themselves, but it also calls other filmmakers to do the same. “Menashe” is a victory not only for Weinstein but a triumph for the industry as a whole.